Why 56 black men are posing in hoodies 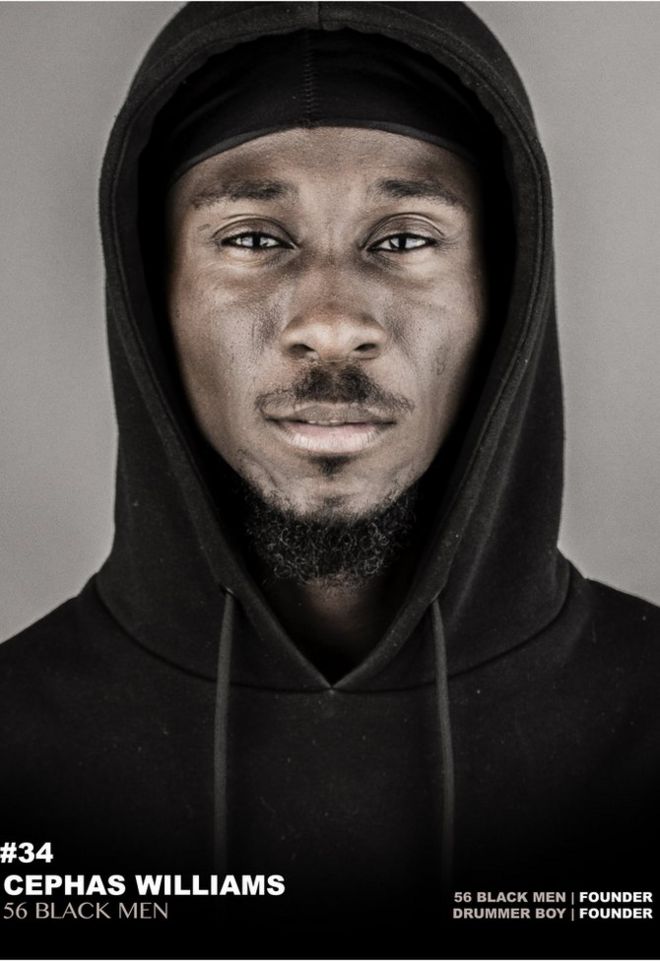 "I am a black man with a degree in architecture, and I find I am not taken seriously when I walk into a room full of strangers."

Cephas is now trying to change perceptions of black men through the use of photography.

The 27-year-old is an entrepreneur from New Cross, south-east London, who works in the community.

But he says people don't see him for the person he is - and are quick to judge and stereotype him.

He is tired of what he calls the negative portrayal of black men within the media and the stigma attached to them in public.

"I may be sitting on a train and there's a spare seat next to me, and you see people looking to see if it's OK to sit next to me. And I have to gesture to let them know it is safe."

Using social media as a platform, he posts striking headshots of black men in hoodies.

These men are politicians, directors, teachers - all of them have positive life stories that are irrelevant to the attire they choose to wear.

But the media very rarely tells those positive stories, he says, so the campaign "serves as a reminder that for every black man you see represented doing something negative, there are 56 of us that aren't".

Cephas, who founded Drummer Boy Studios, says he wants to show young black boys they can be something other than an entertainer or a criminal.

"Everyone is talking about knife crime and gang culture and violence and that is not the majority of us.

"How is that going to change the trajectory or the options for young black boys who are looking at the media and seeing themselves in a negative light all the time?

"A lot of us have become what we have been portrayed to be and I have had enough."

The men in his campaign say the hoodie is the most demonised outfit, but Cephas talks of having to change his behaviour to make people feel more comfortable even if he's in a suit.

"It's not nice knowing that I intimidate people. It makes me feel uneasy. I'm an extremely nice person and when I know that people around me feel uncomfortable, I adjust."

Despite his qualifications and experience, he often feels he has to change his mannerisms and demeanour and speaks of putting on his "white voice" in meetings.

He hopes that one day, his future children won't have to - and will be comfortable in the skin they have, the way they speak and the clothing they choose to wear - even if it is a hoodie.

The entrepreneur from Peckham, south London, says the campaign is powerful "because it tells the next generation that the majority out there, even those who may not come from ideal backgrounds - are doing great".

William, 28, owns watch company Vitae London which supports children in sub-Saharan Africa. In just two-and-a-half-years, it has sold products in more than 30 countries, gained Sir Richard Branson as an ambassador and provided more than 2,000 items of school uniform to kids in need.

But he says this doesn't stop people clutching their purses or crossing the street when he passes by.

"We have accepted this as the norm, but it shouldn't be for the next generation, they should be comfortable in their own skin and shouldn't feel like they intimidate other people.

"I really hope that this is a call for action to the media to seek out role models. We can complain about the negative, but if the media don't provide the platform needed to see more positivity, you are facilitating the negative to continue."

Even one of the country's most high-profile black politicians says he isn't exempt from stereotypes.

"It's still too easy for people to fall into lazy impulses about what it means to be a black man in a hoodie," Labour MP for Tottenham David Lammy says.

"I know so many black men doing great things, as postmen, nurses, city traders and fathers. But when these guys put on a hoodie, their success becomes almost invisible.

"I want to live in a society where I can put on a pair of sweatpants and a hoodie and be seen as who I am: not a thug or a brute, but just a guy going to the gym after a long day at work."

Cephas says he is tired of asking for change and hopes the campaign will shine the light on successful black men.

"So much damage has been caused because we have been shoehorned into an identity that does not reflect our full reality.

"I am taking the shoehorn out and showcasing a bagga man who are doing great things and - who look like me."