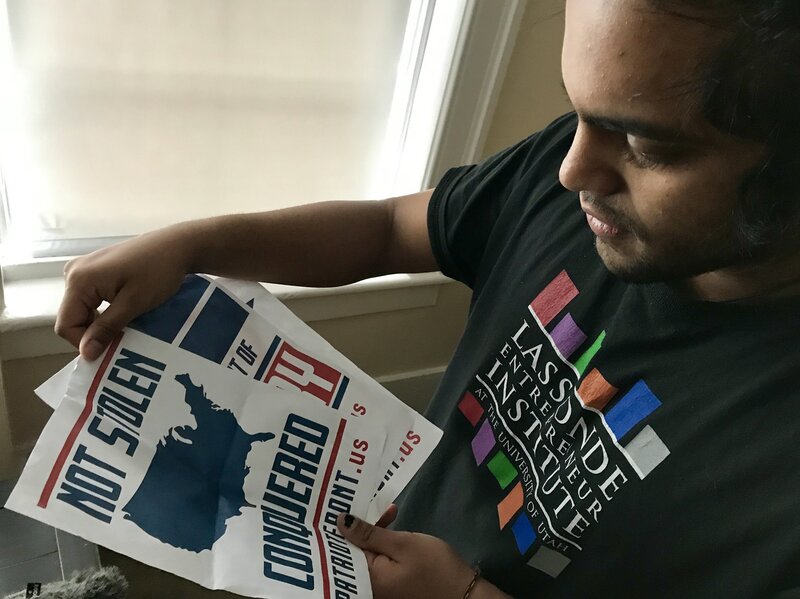 At first, you might not realize the flyer was put there by a white supremacy group.

Flyers like this, posted across the country by American neo-Nazi and white supremacist group Identity Evropa are popping up far more than they used to. Others feature George Washington. According to a new report by the Anti-Defamation League, white supremacy propaganda increased by 182 percent in 2018 compared with the year before.

The increase in flyers and other propaganda reflects a relatively new strategy for hate groups, the ADL says. Under intense scrutiny, white supremacists are reluctant to show their face in public, so they're relying more on leaflets and posters to spread hate without putting themselves at personal risk, it adds.

Berkeley ppl- I found an id/entity ev/ropa poster in front of gbc today, so odds are there’s other ones up around campus. stay safe, tear them down if you’re comfortable doing so. if not, reply here and I or one of my friends will go do it.

the poster before I tore it down.
image description- two photos of a posterboard with various fliers in front of golden bear cafe, both show posters which read id/entity ev/ropa European roots American greatness and show a statue of a man on a horse and a triangle symbol pic.twitter.com/EdebLbHn9z

ADL counted 1,187 incidents of propaganda in 2018, up from 421 incidents in 2017. While college campuses remain a primary target, most of the increase occurred off of college campuses, with 868 incidents in 2018, up from 129 the year before. The alt-right also uses banners to promote its message, the ADL said, counting 32 instances of white supremacist banners hung in high-visibility locations such as highway overpasses.

The frequent subtlety of the flyers is intentional, and represents a shift in the way white supremacy groups are attempting to spread their ideology, the ADL reports.

"If you know what you're looking at, the white supremacists' banners, stickers and fliers clearly convey racism, anti-Semitism and Islamophobia," ADL senior investigative researcher Carla Hill wrote in Politico. "But the messaging is not always overtly hateful."

According to the ADL, the goal of these understated flyers is to appeal to mainstream conservatives, who might appreciate the seemingly innocuous message of American exceptionalism. But their underlying message, the ADL says, is one of hate.

Identity Evropa — designated as a white nationalist hate group by the Southern Poverty Law Center — focuses on encouraging white people to embrace their shared racial identity. According to the ADL, Identity Evropa is the group that popularized the white supremacist slogan "You will not replace us," which was chanted during the rally in Charlottesville, Va., where a white nationalist drove into a crowd of protesters, killing one woman.

Hill also cited another group, the Patriot Front, which posts red, white and blue flyers, espouses "mainstream conservative messaging" such as "America First," and rallies against what it calls "fake news." But "when they gather for events, Patriot Front members are far less circumspect about their racism, frequently shouting 'Blood and Soil!,' a callback to a Nazi slogan," Hill wrote.

As they're increasing their propaganda, hate groups are also rethinking how they hold public events. While the number of racist rallies and demonstrations rose last year, from 76 in 2017 to 91 in 2018, fewer of those events were announced beforehand, the ADL said. Instead, hate groups are using "flash mob" techniques, coming together to rally without giving opponents time to mobilize. Identity Evropa and the group Patriot Front held more than 30 "unannounced, quickly disbanded gatherings" last year, ADL said.

White supremacy groups are "trying to take advantage of a very polarized sociopolitical landscape," Brian Levin, director of the Center for the Study of Hate and Extremism at California State University, San Bernardino, told The Wall Street Journal.

And by posting photos of the propaganda on social media, these groups can make themselves seem to be more influential than they really are, Levin said.