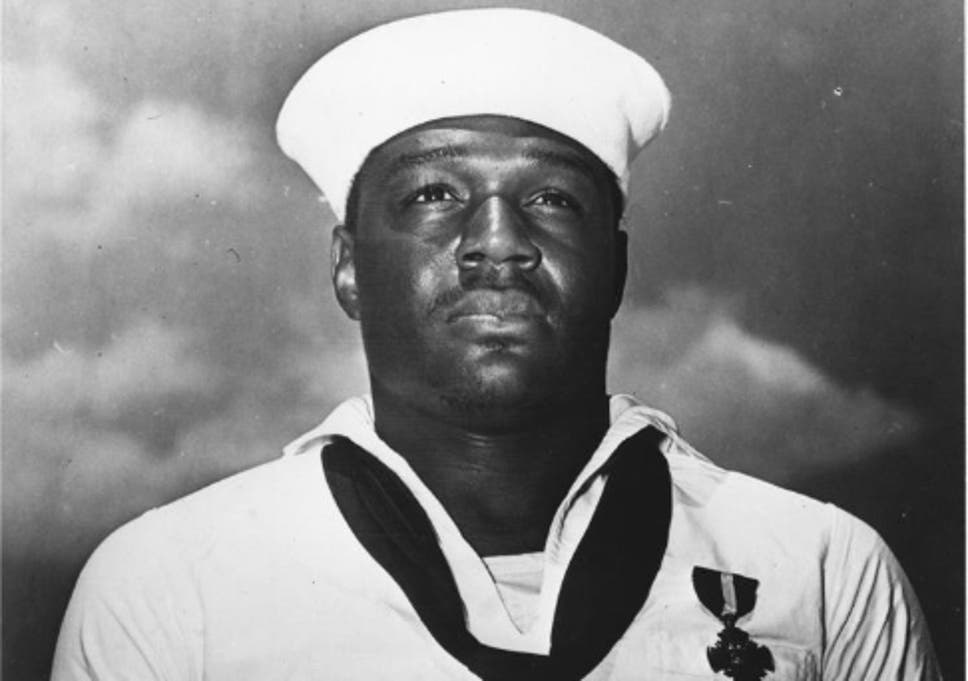 On Martin Luther King Jr. Day, Monday, at Pearl Harbor, the Navy is expected to announce that a $12.5 billion aircraft carrier will be named after Mess Attendant 2nd Class Doris Miller, the first African American to receive the Navy Cross for valor for his actions on Dec. 7, 1941, when he manned a machine gun on the USS West Virginia to fire back at attacking Japanese planes.

“I think that Doris Miller is an American hero simply because of what he represents as a young man going beyond the call of what’s expected,” said Doreen Ravenscroft, president of Cultural Arts of Waco (Texas) and team leader for the Doris Miller Memorial.

In 1941 an African American was not allowed to man a gun in the Navy, and as far as rank was concerned, “he could not really get above a messman level,” Ravenscroft said. Miller’s actions started to turn the tide, she added.

“Without him really knowing, he actually was a part of the civil rights movement because he changed the thinking in the Navy,” Ravenscroft said Friday.

“In the end, the fact that he didn’t think about what could be repercussions — that wasn’t a thought when, at the time and in war, he did what was needed in his way to defend the United States of America,” she said.

He will be the first African American to have an aircraft carrier named after him, according to Navy records. The big ship is not expected to be home-ported in Hawaii.

Two of Miller’s nieces are expected to be at Pearl Harbor for the announcement, including 66-year-old Flosetta Miller.

Ravenscroft said “Dorie” was a nickname that the Navy gave Miller, while “his family is extremely particular that he be called Doris Miller.” USS Miller, a destroyer escort, previously had been named in honor of the Pearl Harbor veteran. 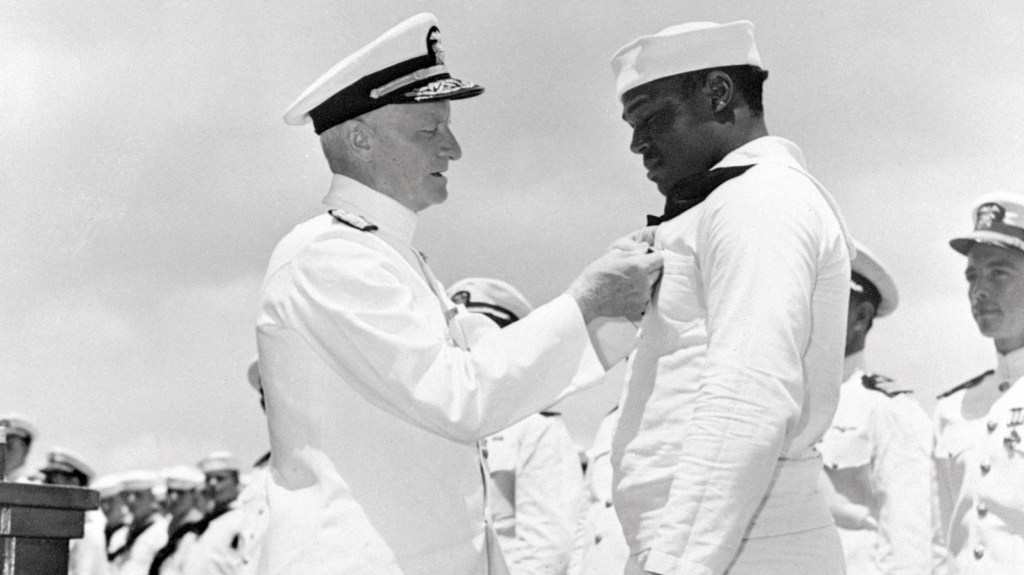 Miller’s Navy Cross citation reads, “For distinguished devotion to duty, extraordinary courage and disregard for his own personal safety during the attack on the fleet in Pearl Harbor, Territory of Hawaii, by Japanese forces on December 7, 1941. While at the side of his captain on the bridge, Miller, despite enemy strafing and bombing and in the face of a serious fire, assisted in moving his captain, who had been mortally wounded, to a place of greater safety, and later manned and operated a machine gun directed at enemy Japanese attacking aircraft until ordered to leave the bridge.”

Adm. Chester W. Nimitz, commander in chief of the Pacific Fleet, personally presented the Navy Cross to Miller on board the aircraft carrier USS Enterprise in Pearl Harbor on May 27, 1942.

According to the Navy, Miller, then 22, had arisen at 6 a.m., and was collecting laundry when the alarm sounded.

“He headed for his battle station, the antiaircraft battery magazine amidship, only to discover that torpedo damage had wrecked it, so he went on deck,” the Navy account states. “Because of his physical prowess, he was assigned to carry wounded fellow sailors to places of greater safety. Then an officer ordered him to the bridge to aid the mortally wounded captain of the ship. He subsequently manned a .50- caliber Browning anti-aircraft machine gun until he ran out of ammunition and was ordered to abandon ship.” 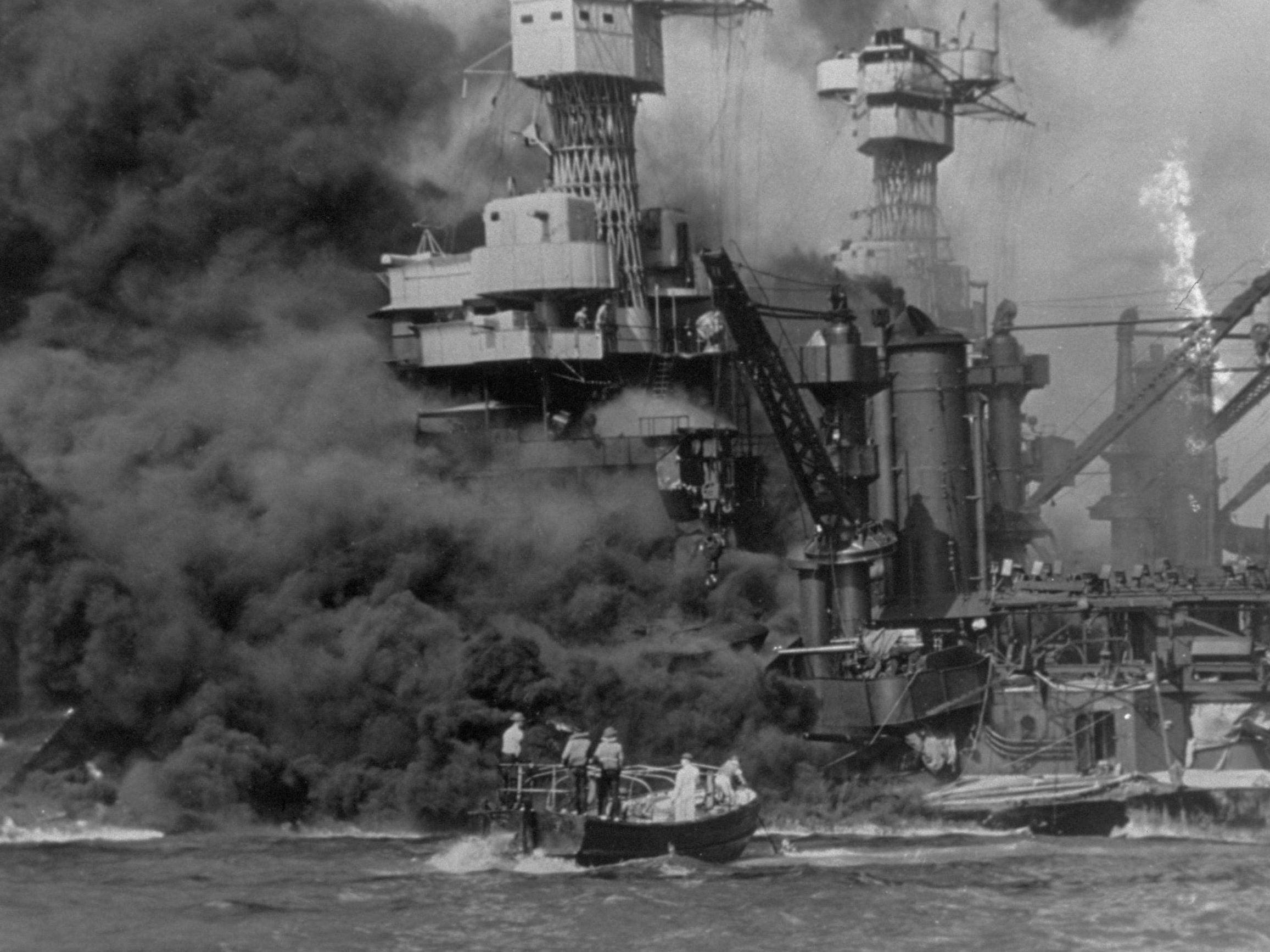 In high school Miller was a fullback, and on the West Virginia he was the ship’s heavyweight boxing champion. Miller had not been trained to operate the machine gun.

“It wasn’t hard. I just pulled the trigger and she worked fine. I had watched the others with these guns. I guess I fired her for about 15 minutes,” he said later, believing he “got” one of the Japanese planes.

Miller served aboard the USS Indianapolis from December 1941 to May 1943, the Navy said. He was then assigned to the escort carrier Liscome Bay. Miller died on the ship when it was torpedoed by a Japanese submarine on Nov. 24, 1943, during the invasion of the Gilbert Islands, according to the Navy. The Navy has so far ordered four new Gerald R. Ford-class aircraft carriers — the Ford, John F. Kennedy, Enterprise and CVN 81, which has not been named — as successors to Nimitz-class vessels.

The Navy has been fixing problems with weapons elevators on the USS Gerald R. Ford, which was commissioned in 2017. CVN 81 has a procurement cost of $12.5 billion. It is expected to be delivered in 2032.

“The manpower needs of the Korean War (1950-1953) catalyzed racial integration in the services,” the report said. “Under pressure to rapidly build up and deploy forces, the Army lacked the time and resources to continue to operate separate training pipelines for black and white soldiers. On the battlefield, Army and Marine Corps commanders began assigning black soldiers to replace losses in white combat units by necessity.”

The Navy said that as of December, 14 ships had been named for African Americans, including destroyers and a ballistic missile submarine. A May 2018 Congressional Research Service report said 69.1% of military active-duty members were white, 16.8% were black, 15.8% Hispanic, 4.4% Asian and 1.1% Native Hawaiian/Pacific Islander, among other identifiers.