Say hello to the comeback queen!

Model, TV personality, activist and entrepreneur Tyra Banks returns to the cover of Sports Illustrated Swimsuit, more than two decades after being the first black woman to grace the cover of the magazine alone in 1997.

Banks came out of modeling retirement specifically for her 2019 SI Swimphoto shoot, photographed in Great Exuma, Bahamas, by Laretta Houston. The star poses in a yellow Andi Bagus string bikini as she gives her signature smouldering smize to the world.

“My first one was 23 years ago, how crazy is that,” an excited Banks said on Good Morning America where she revealed her new cover. “I’m like damn — I’m 45 dog!”

This marks the third SI Swimsuit cover for Banks, 45, whose career was launched when she first starred on the cover of SI Swimsuit in 1996, with model Valeria Mazza, followed by a solo cover in 1997.

“Since Tyra’s first cover in 1996, she’s transformed herself into nothing less than a mogul, a cultural force and a supernova of inspiration and empowerment,” says SI Swimsuit Editor MJ Day. “She’s kind of the SwimsuitIssue ethos come to life, everything we know this franchise can be.”

For the 2019 issue, Banks recreated her iconic polka dot bikini moment during the Bahamas shoot.

“We couldn’t find the exact one in the archives — it was the polka dot bikini so we recreated that bikini,” she said. “I recreated it [the shoot] — 25 pounds heavier.” 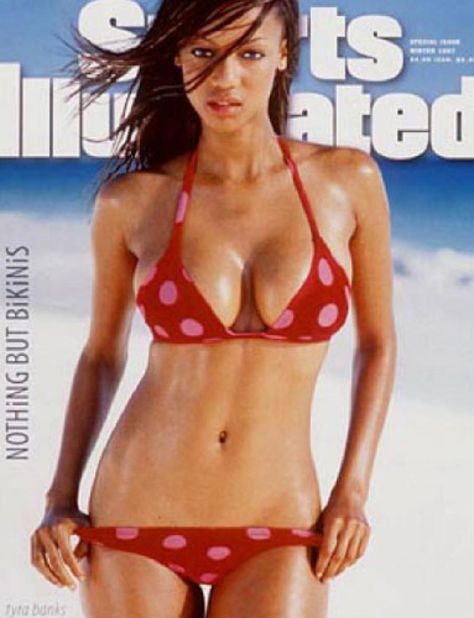 “The three women that make up the covers of the 2019 Sports Illustrated Swimsuit Issue represent the brand in the most powerful way possible,” adds Day, who is celebrating her seventh year as editor and 22nd year working at the brand. “While each individual woman is so unique, they come together cohesively to tell a spectacular story.”

The 2019 issue of SI Swimsuit features a diverse group of 34 women and continues to put focus on female empowerment and inclusivity. This year’s theme, “Shattering Perceptions,” sets an intention to “redefine the cultural conversation around beauty by celebrating a diverse group of women.”

Whether it’s Muslim model Halima Aden posing in a hijab and Burkini or 54-year-old model and author Paulina Porizkova writing an essay on ageism in the industry, Sports Illustrated Swimsuit continues to champion women from all backgrounds.

Last year, Banks surprised model Danielle Harrington with her 2018 SI Swimcover reveal in an emotional moment for both women. Harrington was the third black cover star of the magazine’s swimsuit issue, following in the footsteps of Banks and Beyoncé.

In 2015, Banks reflected on her history-making SI Swim cover, telling PEOPLE that at the time there was suspicions that she got plastic surgery.

“I remember back then everyone thought I fake boobs because they just kind of stood up like that,” she said while reflecting on her cover, adding, “But no that was good genes.”

In 2007, after paparazzi photos of Banks on vacation in a swimsuit emerged, critics attacked her apparent weight gain. But Banks fought back, appearing on her talk show and exclaiming, “Kiss my fat a–!”

“I’m happy that the fashion industry is finally catching up,” Banks told PEOPLE last March. “What I’m hoping for is that the Ashley Graham‘s, the Gigi Hadid’s, everyone is just models. Not plus, not short, not trans, not curvy. I just want it to be normal.”

The model also opened up about her weight loss, a result of an ankle injury she sustained in 2017.

“I lost 30 lbs.,” Banks shared with PEOPLE at the time. “Now I’m a different body type. But I don’t feel like I’m betraying people. I’ve still got a–, I’ve still got boobs!”