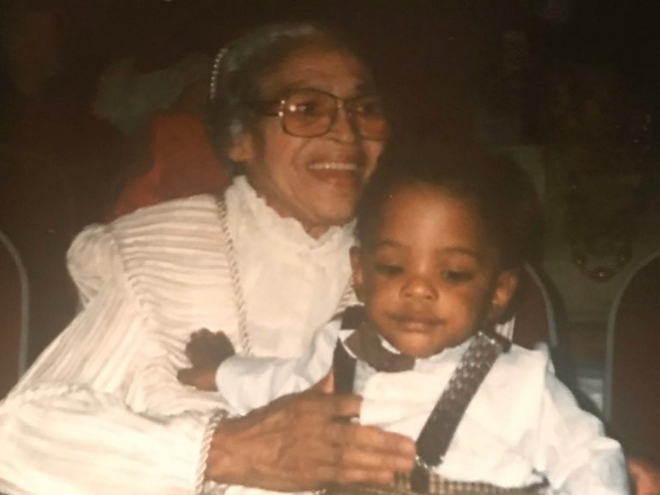 Well, it's time to add “historical flex” to your vocab arsenal because one West Side Detroit native just broke the internet with a single tweet.

Twitter erupted Tuesday after model and artist Chandler Cosey posted what appeared to be a super casual, totally unassuming throwback photo of himself as a baby, next to a recent photo of the 24-year-old, who now lives in Philadelphia.

“Lil Chan vs Big Chan” the caption reads. It didn't take long for Twitter to recognize the real star of the throwback photo, none other than literal Civil Rights icon Rosa friggin' Parks, who is seen in the yellowed photograph smiling and holding a wiggly and disinterested plaid suspender-wearing Lil Chan.

Twitter, naturally, was not going to let Cosey get away with such flexing.

This gotta be one of the rarest photos in history.

So you just going to pretend like Rosa Parks ain’t holding you? https://t.co/lADtkNFx0v

Others point out that the photo highlights the fact that the Civil Rights Movement was not as long ago as we seem to remember.

Any day Rosa Parks is trending outside of Black History Month is a good day! ✊🏾 https://t.co/RUePv6aRBq

Of course, the post brought out some low-key conspiracy theorists: Is it Photoshop or Chan's gran?

There’s always the possibility that it’s photo shopped, but who honestly has the desire to randomly photoshop Mama parks for clout lmaoo https://t.co/Bqvu9lvcyi

Some Twitter-users may want to peep Rosa's Wikipedia page before having a heart attack. (She died in 2005.)

Me checking to see if rosa parks is okay after seeing her trending #RosaParks pic.twitter.com/YQNKZh8V1Q

Cosey says he is in awe at the response to his post, which has accumulated more than 6,000 reshares and 40,000 likes.

“The photo was taken in August 1996 I was around one and a half years old,” Cosey shares with Metro Times via text. “The event was a civil rights activist dinner I believe and it was taken by Monica Morgan a photographer from Detroit.”

In 1955, Parks famously refused her seat on a segregated bus in Montgomery, Alabama, sparking the Montgomery bus boycott and nationwide activism to end segregation. She later settled in Detroit with her husband and died at the age of 92 of natural causes. The restored Montgomery bus is housed at the Henry Ford Museum and Parks is buried in Detroit's Woodlawn Cemetery.