Trump's handwritten note on the Impeachment probe is making the rounds 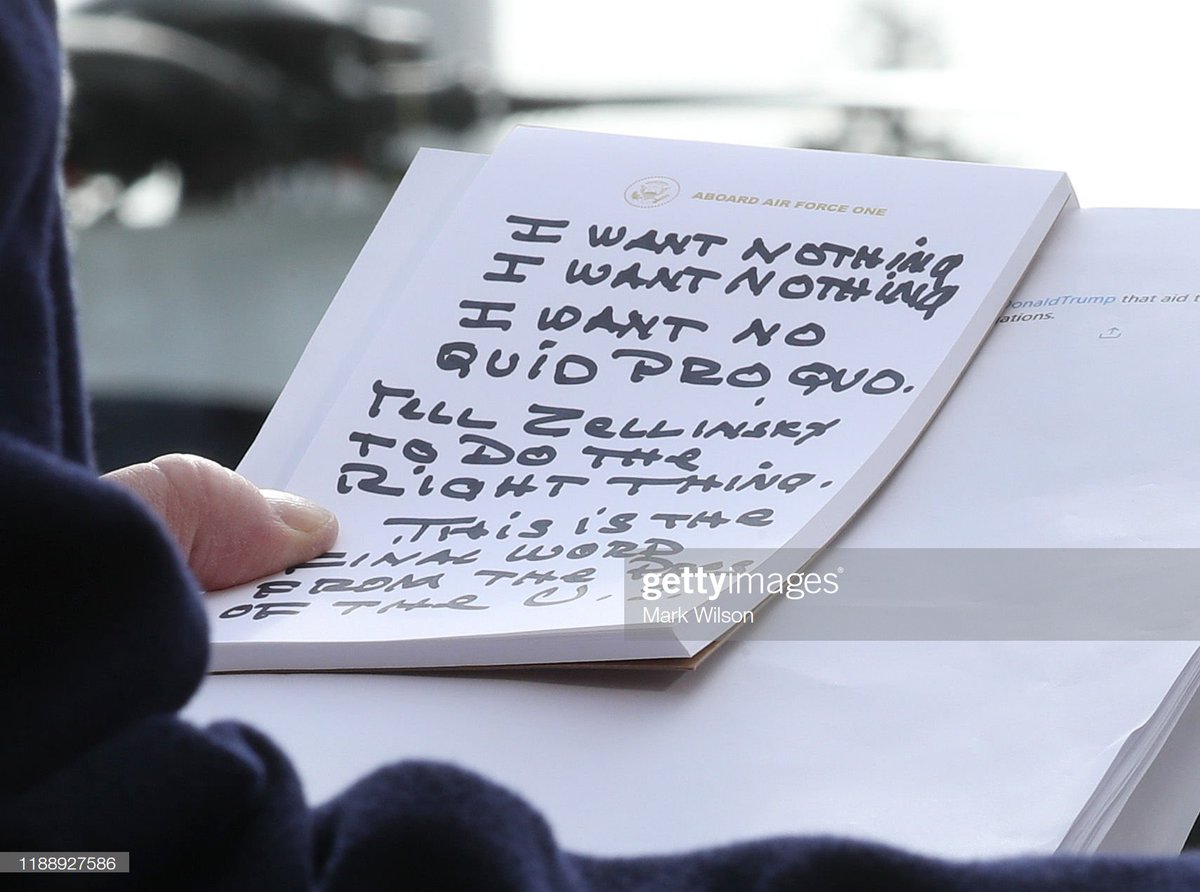 The impeachment inquiry into President Donald Trump has the whole world watching. It doubles as a political showdown that will surely go down in the history books, memorialized not only by the transcripts and televised public hearings, but also the memes.

A number of witnesses have now testified publicly before Congress about allegations that Trump used $400 million in military aid to Ukraine as leverage for his own political and personal gain.

Though some have dismissed the hearings as boring, the internet has had plenty to say about the developments of the impeachment probe — from the moment that House Speaker Nancy Pelosi announced the inquiry at the end of September, to this week's bombshell hearings.

Here are some of the best memes from the impeachment inquiry so far:

The simple word of "impeachment" made its way into funny puns, including one by singer Lizzo.

WHEN PEOPLE ASK ME WHAT MY FAVORITE ICE CREAM FLAVOR IS. (PS - maybe not mint but I’ll eat it if it helps) #peach #mint #impeachment #finally #libraseason #cominginhot

People made Pelosi into a meme when she first announced the impeachment inquiry.

Live feed of Nancy Pelosi in her office this morning: pic.twitter.com/LTDIEsjwZt

Some memes showed how people planned on keeping up with the inquiry.

We are dressed and ready for the #ImpeachmentParty. What are you wearing? pic.twitter.com/Svwqw3RWAh

Amid the stunt of Republicans storming the Sensitive Compartmented Information Facility (SCIF) while House Democrats conducted closed-door hearings in relation to the impeachment inquiry, one woman in blue stood out from the crowd.

tag yourself i'm the woman in the blue dress waiting for the light to take me pic.twitter.com/JDVXNdgyI8

Meanwhile that woman in blue is about to get swept up in the Rapture and no one even notices https://t.co/XSZr57o5nL

Kudos to the woman in blue finding that Instaworthy lighting. https://t.co/D1UsjtNRAW

George Kent, a senior State Department official, and Bill Taylor, the top US diplomat in Ukraine, testified on the first day of public impeachment hearings, and people were shocked with what they had to say.

All I can say is that testimony so far, less than 2 hours in, is pic.twitter.com/SYXXfpNdTL

Ambassador Taylor and George Kent coming today with all the receipts of what happened like #ImpeachmentDay #ImpeachmentHearings pic.twitter.com/M95FRp9u2z

Lt. Colonel Alexander Vindman testified in the second public hearing, but people noticed a reporter chugging her coffee as Vindman delivered his testimony.

Gordon Sondland, US Ambassador to the European Union, testified on Nov. 20 in the third day of public hearings, delivering one of the most damning testimonies of the impeachment probe — all with a smile on his face.

I don’t always throw the Trump Administration under the bus... but when I do, I do it under oath. Stay thirsty my friends.#SondlandSings pic.twitter.com/QFn4u8IitU

Has anyone done this yet pic.twitter.com/UGk1liQdY3

After Sondland's testimony, Trump spoke to reporters with speaking notes in hand. The memo, written in Sharpie, prompted the internet to meme-ify it.

every guy in college when I tried to define our "relationship": pic.twitter.com/FZfpLUWegR

Overall, these memes serve as a daily reminder that the US is living in quite a historic time.

Me in twenty years recalling all the impeachment memes pic.twitter.com/vU3M2jf1Id