Fires raged through the night in Minneapolis after a group of demonstrators swarmed a police station, which officers had been ordered to abandon as protests intensified in a city rocked by the death of a black man in police custody. Demonstrators breached a door and entered the Minneapolis Police Department’s Third Precinct station as fires spread, resulting in destruction and further upheaval.

“These THUGS are dishonoring the memory of George Floyd, and I won’t let that happen. Just spoke to Governor Tim Walz and told him that the Military is with him all the way. Any difficulty and we will assume control but, when the looting starts, the shooting starts. Thank you!” https://t.co/GDwAydcAOw

President Trump called the protesters “THUGS,” while suggesting military intervention and warning in a tweet that there could be additional violence if the chaos continued. “When the looting starts, the shooting starts,” the president wrote. Trump’s tweet was later flagged by Twitter for “glorifying violence.” The scene came at the end of a day in which protesters in Minnesota and beyond demanded that four now-fired officers be arrested in a case that has generated nationwide outrage. Video captured a white police officer pressing his knee into George Floyd’s neck in a banned maneuver on Monday as Floyd repeatedly said, “I can’t breathe.” Floyd later died.

Maryland Gov. Larry Hogan (R) said there is no comparison between George Floyd’s death in Minneapolis and that of Freddie Gray, whose death in the custody of Baltimore police in 2015 prompted nationwide outrage, a riot and a week of unrest in that city.

“I don't think it's a fair comparison,” Hogan said during a Friday appearance on NBC's “Today” show. “The evidence here seems overwhelming and clear to me. You have a video of exactly what happened."

Hogan said the communities’ responses to the deaths are similar, however, and he called Minnesota Gov. Tim Walz (D) to offer his advice on dealing with the riots. He condemned Trump’s tweet that said, “When the looting starts, the shooting starts.” 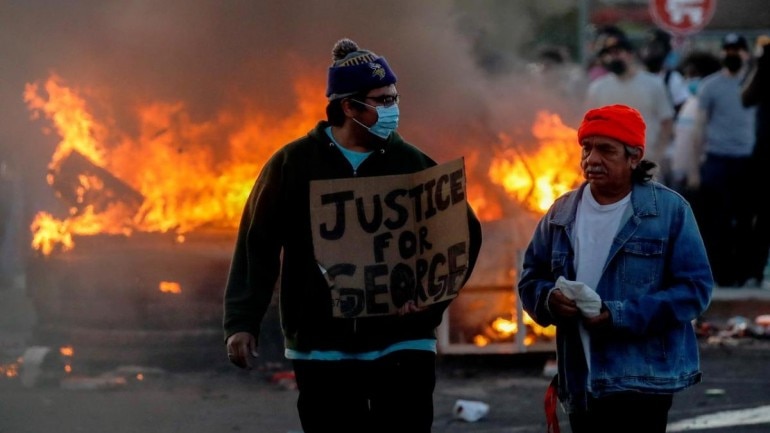 “I do believe that you've got to have law and order. We've got to stop the burning and looting,” Hogan said. “But inciting violence on Twitter is not the way to go about it."

Gray, like Floyd, was detained under questionable circumstances that were caught on tape. Gray died of a neck injury sustained by riding unrestrained in the back of a police van. The officers involved, some of whom were white, were quickly charged but not convicted.

Hogan said that once the violence subsides, leaders in Minnesota must get face-to-face with residents who have “legitimate concerns and frustrations,” but the role of the government right now is to end the violence by “lowering the temperature."

“Inflammatory rhetoric I don’t think is helpful on either side,” he said.

Hogan, who entertained but ultimately turned down overtures by Trump opponents to challenge the president in the Republican primaries, drew national attention in 2015 for his response to unrest in Baltimore. His actions included a week-long curfew and patrols by the Maryland National Guard. After the violence ended, Hogan walked city streets during the daytime, asking residents to keep the peace.