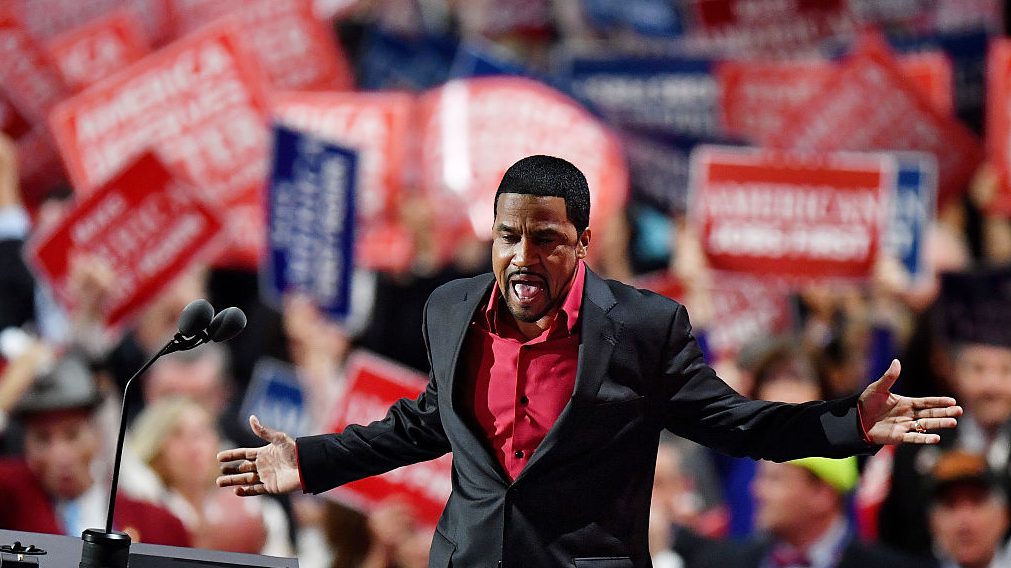 Allies of Donald Trump have begun holding events in black communities where organizers lavish praise on the president as they hand out tens of thousands of dollars to lucky attendees.

The first giveaway took place last month in Cleveland, where recipients whose winning tickets were drawn from a bin landed cash gifts in increments of several hundred dollars, stuffed into envelopes. A second giveaway scheduled for this month in Virginia has been postponed, and more are said to be in the works.

The tour comes as Trump’s campaign has been investing its own money to make inroads with black voters and erode Democrats’ overwhelming advantage with them. But the cash giveaways are organized under the auspices of an outside charity, the Urban Revitalization Coalition, permitting donors to remain anonymous and make tax-deductible contributions.

The organizers say the events are run by the book and intended to promote economic development in inner cities. But the group behind the cash giveaways is registered as a 501(c)3 charitable organization. One leading legal expert on nonprofit law said the arrangement raises questions about the group’s tax-exempt status, because it does not appear to be vetting the recipients of its money for legitimate charitable need.

"Charities are required to spend their money on charitable and educational activities,” said Marcus Owens, a former director of the Exempt Organizations Division at the Internal Revenue Service who is now in private practice at the law firm Loeb & Loeb. “It's not immediately clear to me how simply giving money away to people at an event is a charitable act.”

Asked about the legality of the giveaways in a brief phone interview, the Urban Revitalization Coalition’s CEO, Darrell Scott, said that most gifts were between $300 and $500, and that the group mandates that anyone who receives over $600 fills out a W-9 form in order to ensure compliance with tax law. He did not respond to follow-up questions about how the giveaways were structured and whether they met the legal standard for a charitable act.

Scott declined to name the donors funding the effort. "I'd rather not,” he said. “They prefer to remain anonymous."

Scott, a Cleveland-based pastor, has been one of Trump’s closest and most prominent black supporters. He struck up a relationship with the real estate mogul in the years before Trump’s presidential run, and — along with Trump’s former lieutenant Michael Cohen — co-founded the National Diversity Coalition for Trump to promote that run.

Since then, Scott become a regular presence in the West Wing. He has championed the Trump administration’s criminal justice reform efforts, signed into law as the First Step Act, and the creation of Opportunity Zones. That program, passed as part of the 2017 tax overhaul, provides tax breaks for investment in certain urban and rural districts that are deemed in need of economic stimulus.

In July 2017, the Urban Revitalization Coalition was registered in Delaware, according to public records, and it began promoting the Opportunity Zone program in conjunction with administration officials and other Republican officeholders. Scott and the coalition’s co-founder, Karim Lanier, held a meeting with Treasury Secretary Steve Mnuchin in February 2018, according to Mnuchin’s publicly released schedule, and the group held an event with Kentucky’s then-governor, Republican Matt Bevin, in Louisville the following month. The group’s earlier activities did not feature cash giveaways.

As Trump’s reelection campaign ramps up its outreach to black voters, Scott has come on as a co-chair of its new “Black Voices for Trump” initiative, along with former Godfather’s Pizza CEO Herman Cain and the YouTube video performers Diamond & Silk. The initiative, whose homepage asks voters to text “WOKE” to a campaign phone number, has been holding its own swing state events in recent months. 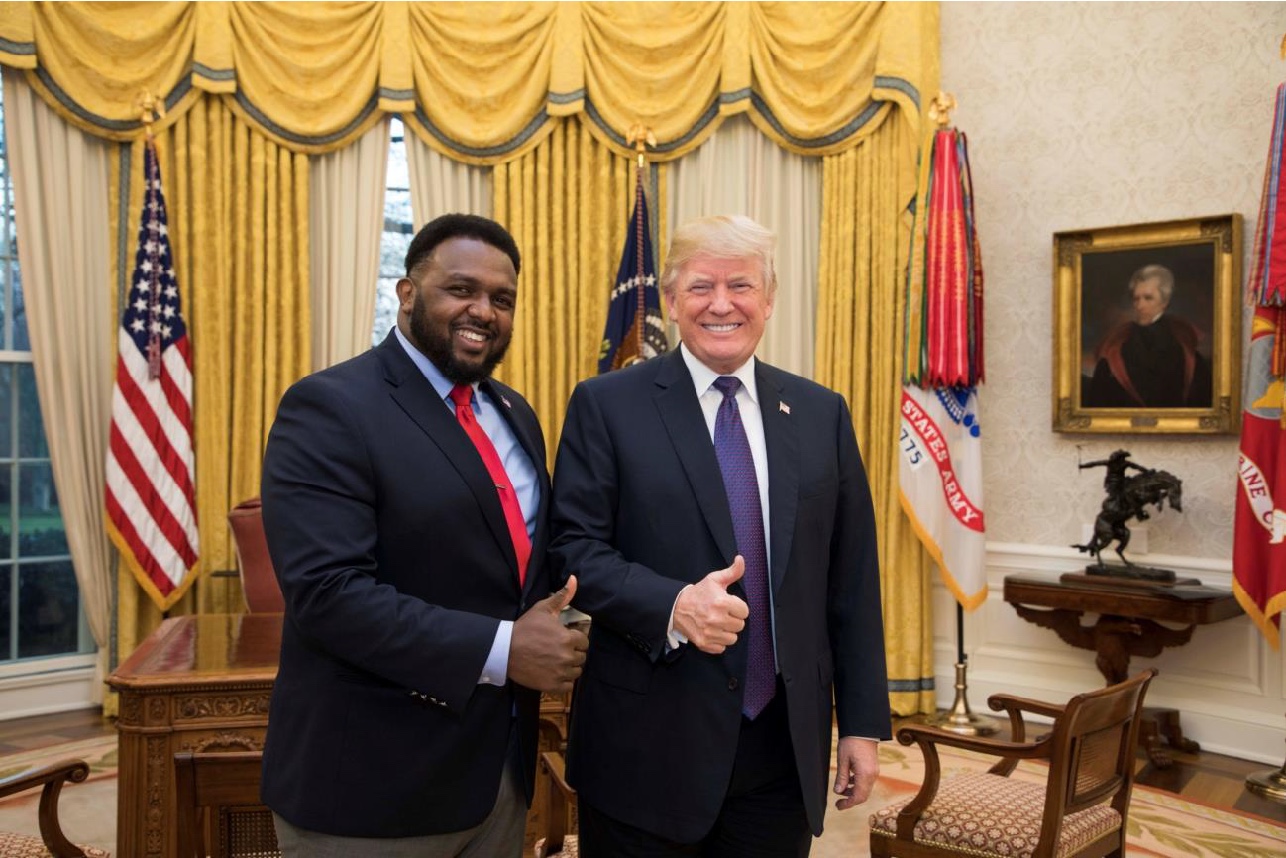 But a Trump campaign spokesman said the Urban Revitalization Coalition’s events were unrelated to its own efforts, and that the campaign “has no knowledge of or affiliation with these activities.”

The parallel tour being organized by the Urban Revitalization Coalition stands out for its promise to shower cash prizes on attendees who listen to speakers promote the president’s initiatives. The first cash giveaway took place last month. Another was scheduled in Virginia for Martin Luther King Day before being scrapped amid a dispute with the college set to host the event. Organizers say they plan to roll out a tour schedule featuring more events soon.

The group’s “Christmas Extravaganza” event in Cleveland last month featured a $25,000 giveaway and an appearance by Ja’Ron Smith, a deputy assistant to the president. A Cleveland native who worked on Trump’s criminal justice reform, Smith is among the highest-ranking black officials in the White House.

At the event, which also featured an appearance by television personality Geraldo Rivera, Lanier compared the investigative scrutiny faced by Trump to the plight of wrongfully incarcerated black men. He also defended Trump’s record on race.

"President Donald Trump — the one that they say is racist — is the first president in the history of this country to incentivize people who have the money to put it into ... urban areas,” he said. 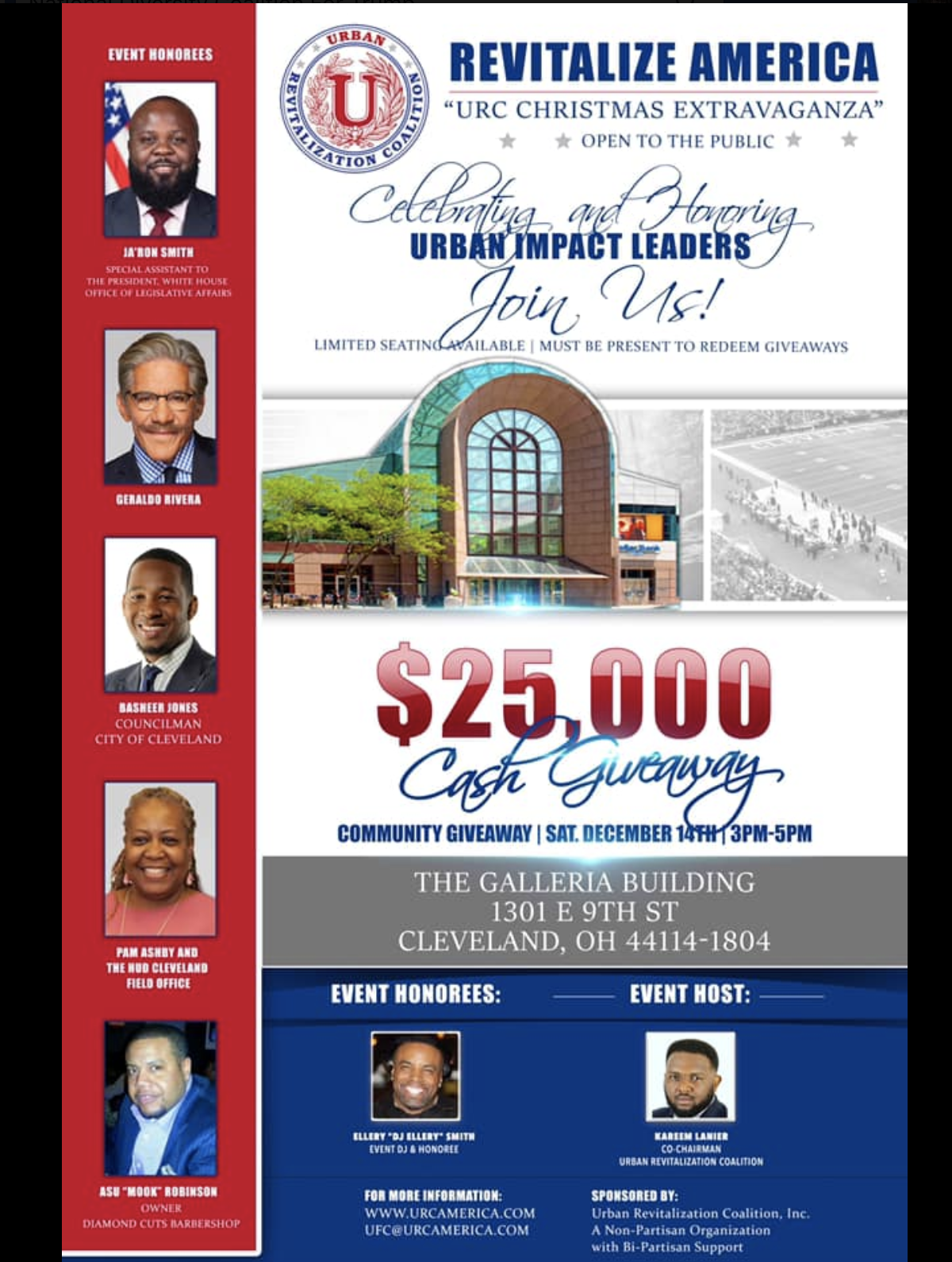 White House spokesman Hogan Gidley did not respond to requests for comment.

Charitable organizations can hold events praising and honoring public officials so long as they avoid supporting or opposing candidates in elections.

"If they do it independently and it really is agenda focused, not electoral, yes that's permissible under campaign finance law," said Adav Noti, a senior director at the Campaign Legal Center, an election law watchdog.