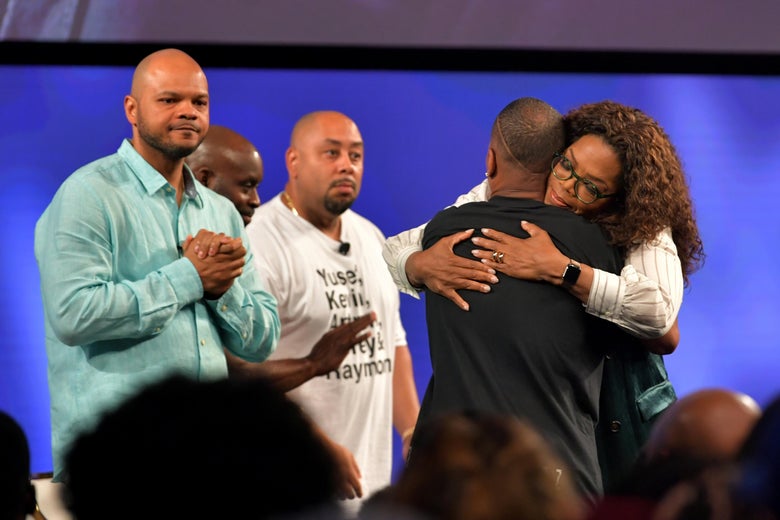 Oprah Winfrey sat down for an interview with Korey Wise, Kevin Richardson, Raymond Santana, Antron McCray and Yusef Salaam — the men formerly called “The Central Park Five” and now referred to as “The Exonerated Five” — at Netflix’s FYSEE location in Hollywood on Sunday night. The conversation, which also included “Whey They See Us” writer and director Ava DuVernay was one of two panels recorded for a special, set to air on Netflix and OWN.

When Winfrey asked the five men if they “blame Linda Fairstein for what happened to them,” they replied with a unanimous “yes.” Winfrey continued her line of questioning, asking if “she the only one to blame, or were there others?”

The answers got a little more complicated as the men explained that they do not feel that Fairstein is the only person responsible for their false imprisonment as teens. Korey Wise was the first to answer, saying “she was just doing her job, but it caught up to her.”

Santana said when the DNA evidence recovered from the crime scene didn’t match the boys – or any of the other approximately 40 young men tested — was the turning point.

“At that moment, this was her chance for her to take step a back and say ‘Let me reevaluate, something’s wrong here.’” he explained. “That pivotal moment that she had to really do the right thing, and she fumbled it. And she kept pushing forward.”

“I believe she was one of many, [but] there are still many more who still need to be exposed,” Richardson added.

Earlier on Sunday, at the Produced By conference in Burbank, Calif., producer Jane Rosenthal revealed that former prosecutor Linda Fairstein decline to participate in the production because the team was also working with the formerly accused men. During that conversation, Rosenthal explained that the team approached Fairstein via email about offering her perspective in the series, but “her point of view was clearly that she didn’t want us talking to the five men if we were talking to her.”

Fairstein is portrayed by Felicity Huffman in the four-part series and the former prosecutor has experienced intense backlash since the show premiered. Fairstein has closed her social media accounts, resigned from a position on the board of trustees at Vassar College, and stepped down from her positions on the boards of other sex crime victim advocacy groups. On Friday, publishing house Dutton dropped the author, after releasing more than 20 best-selling crime novels from the attorney since the mid-90s. Their decision coincided with a petition signed by over 125,000 people demanding they stop representing her.

“I think it’s important that people be held accountable,” DuVernay told Winfrey during the conversation. “And that accountability is happening in a way today that it didn’t happen for the men 30 years ago.”

“When They See Us” star Joshua Jackson, who played McCray’s defense attorney Mickey Joseph, gave his take on the red carpet before the event, saying that he doesn’t think any of the public reaction to Fairstein is undeserved.

“It is a little shocking that it took this performance for people to finally really examine her behavior through this case and possibly even through all of her cases,” Jackson explained to Variety. “But I would really want to caution people against having her be the scapegoat. She is a convenient villain because she is the villain of this story — one of many villains — but she is a villain in the story. [But] the largest villain of it all is all of us, is the system itself.”

DuVernay continued, “Our real goal is to be able to say ‘Go America! Let’s do this, let’s change this.’ And you can’t change what you don’t know, so we came and showed you what you may not know. And now that you know, what will you do?”

A representative for Fairstein had no comment in response to this story.

The full conversation will premiere on Netflix and OWN on Wednesday, June 12 at 10 p.m. ET/PT. “When They See Us” is currently streaming on Netflix.