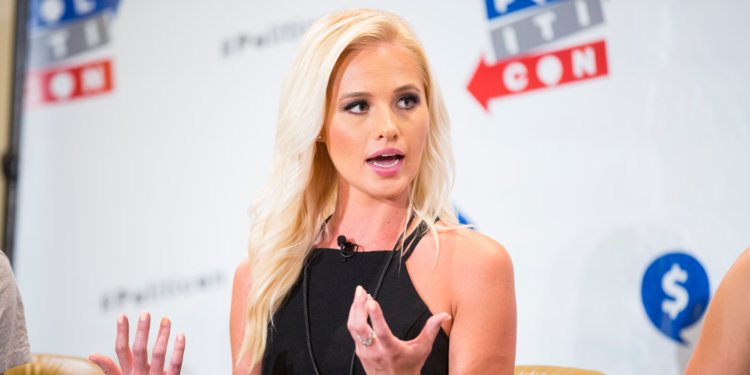 Fox News commentator Tomi Lahren announced Friday that her "Freedom" athleisure line is not made in the United States.

After the line was announced a week earlier, critics were quick topoint out the range of sports bras, leggings, and other garments offered in star-spangled and camouflage prints were made in China.

Lahren wrote on Twitter alongside a statement from Alexo Athletica CEO Amy Robbins that the brand that is producing the line "aims to be Made in America" and is still "working towards that," but "increased labor costs and heightened regulations" pushed their production overseas.

"Like many American small business owners, Alexo aims to be Made in America," Lahren wrote. "We are working towards that."

"Due to the increased labor costs and heightened regulations many U.S.-based manufacturers face, we were left with little option but to manufacture overseas to start out," the statement from Robbins read. "We're working diligently to bring our manufacturing back home to the US and work with other hardworking companies that pride themselves on integrity and quality."

Like many American small business owners, Alexo aims to be Made in America. We are working towards that. A message from Alexo CEO Amy Robbins. pic.twitter.com/D09selTIpx

Lahren announced the line with a defiant Instagram post that claimed she had been told she was "too 'controversial' to have an athleisure line."

"Some have told me I'm too "controversial" to have an athleisure line, that conservatives should just stick to politics and Trump cheerleading," Lahren wrote. "My response? Watch me. Introducing Freedom by Tomi Lahren by @alexoathletica full line available now."

Some have told me I’m too “controversial” to have an athleisure line, that conservatives should just stick to politics and Trump cheerleading. My response? Watch me. Introducing Freedom by Tomi Lahren by @alexoathletica full line available now. #TeamTomi #FreedombyTomiLahren #Alexo #athleisure

The line appears to be pegged at Lahren's conservative following, and is being designed and produced in partnership with Alexo Athleticwear, which is best known for making "concealed carry yoga pants" and other clothes designed to hold "a self defense tool of choice," which Lahren has previously promoted.

An ad for the line shows Lahren describing feeling "locked out" of the athleisure space and inspired to make the line for those who are "proud to be an American, proud of their freedom, proud of the country they live in."

Lahren adds that the pockets in the leggings are perfect for people who "believe in the Second Amendment," as they can use it for a gun, phone, or other items because "it's about freedom."