These Black Pitmasters Are Hustling To Preserve Barbecue's Roots 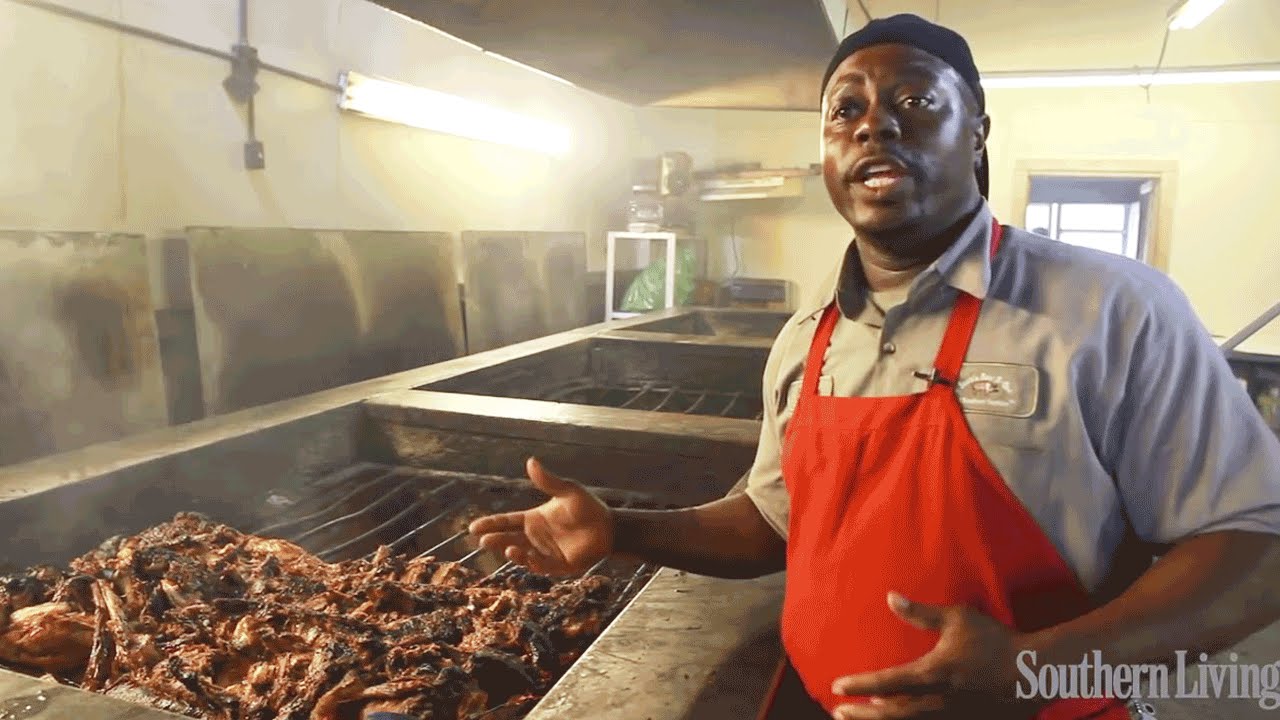 American barbecue often ignites a passionate discourse that can only come from a deep love and appreciation of tender, flavorful smoked meat. The debates are endless: Which state makes the best barbecue: Texas, Kansas, North Carolina, Missouri, Tennessee or Georgia? Sauce on the side or served on the meat? Which wood is ideal for smoking? Depending on who you ask, there is indeed a right way and a wrong way to approach barbecue, but often lost in the conversation are the black pitmasters, cooks and chefs throughout the country who are working to carry the culinary tradition into the future.

To have a real dialogue about barbecue, you must first be prepared to have unsavory conversations about the United States. From Kenya to Germany, many cultures have practices for roasting or smoking meat — but we wouldn’t be telling the complete story of barbecue heritage without acknowledging that the cooking technique was originally the byproduct of an exchange between Native Americans and enslaved Africans in the Caribbean beginning in the 16th century.

Michael Twitty, a food historian and author of the 2018 James Beard Foundation’s Book of the Year “The Cooking Gene: A Journey Through African American Culinary History in the Old South,” is one of the most vocal advocates for making sure the history of barbecue is not rewritten to downplay the contributions of those who crafted the art while suffering under oppression. 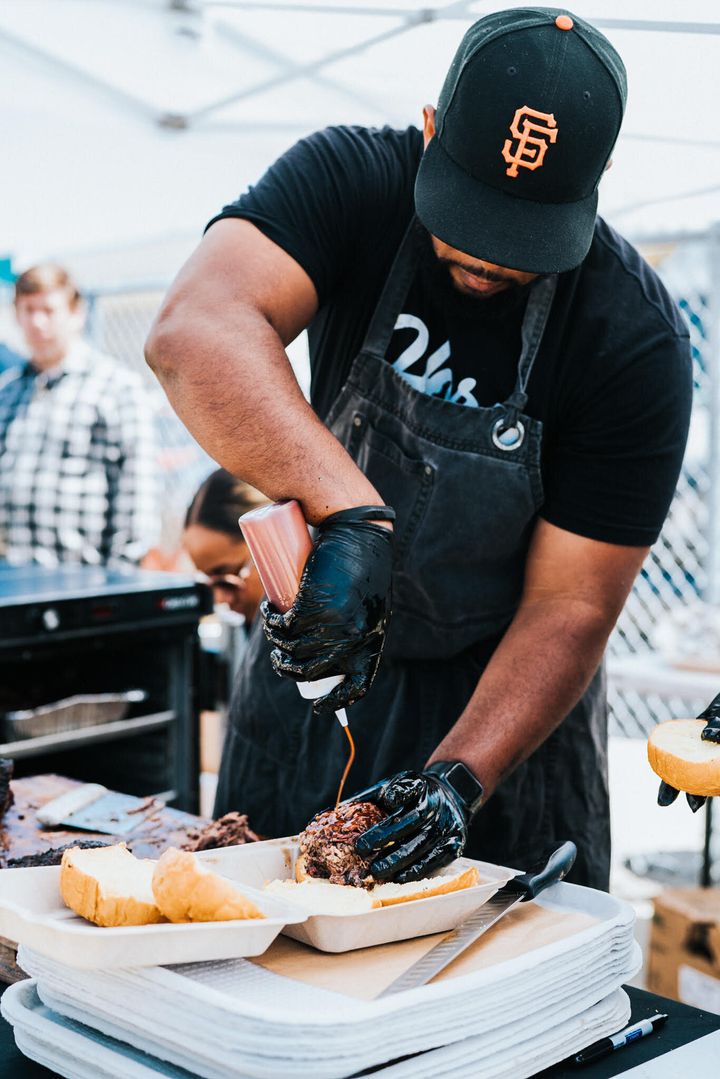 “If America is about people creating new worlds based on rebellion against oppression and slavery, then barbecue is the ideal dish: it was made by enslaved Africans with inspiration and contributions from Native Americans struggling to maintain their independence,” Twitty wrote in The Guardian, explaining how the narrative around barbecue’s roots often focuses on European influences.

Unfortunately, black and Native American influence in barbecue is often erased from pop culture and the media. As of this year, only three African American pitmasters — Henry Perry, John “Big Daddy” Bishop, and C.B. Stubblefield — have been inducted into the Barbecue Hall of Fame, and all three were honored posthumously. Other inductees into the Barbecue Hall of Fame? Celebrity chefs like Guy Fieri, Adam Perry Lang and Myron Mixon. Additionally, an article about Texas barbecue facts, published in the Austin-based country lifestyle media platform Wide Open Country, failed to include any mention of the impact that Native Americans and enslaved Africans have had on barbecue. And if you’re looking to take “An Epic Barbecue Tour of Texas” by way of Eater, don’t expect a single black-owned BBQ joint to be included on the list.

The Hidden Bias of Brisket

It’s not uncommon for African American influence to be overlooked in favor of narratives about the contributions of white chefs, cooks and restaurateurs, which is evident in the nation’s obsession with brisket smoked in Central Texas style.

Of all the U.S. regions known for their barbecue, Texas-style barbecue has transcended state lines and international waters to become the culinary standard for smoking meat. For example, Austria and Estonia are among the many countries with restaurants that serve Texas-inspired menus, according to Texas Monthly. And if Texas is the seminal purveyor of barbecue in the United States, brisket is the state’s MVP.

“We have centuries of people learning the skill and honing and really setting a standard for excellence in barbecue. I’d just hate for that to get obscured or lost or to have it die out.”

Thanks to TV shows and coverage in magazines and food blogs, brisket has become a barbecue media darling, with top purveyors like Aaron Franklin, of Franklin Barbecue in Austin, receiving book deals, TV shows and accolades (Bon Appétit dubbed Franklin a “barbecue genius”). And while the popularity of brisket has helped put Texas barbecue on the international stage, it has also alienated many black pitmasters in the state who have historically focused on other aspects of barbecue.

“At Texas Monthly, and we evaluate barbecue joints according to brisket,” wrote Barbecue Editor Daniel Vaughn, in a 2015 article where he addressed his and Texas Monthly’s bias that has led to many black establishments being dismissed by the publication. “It’s a common fallback position for writers and barbecue fans alike, a rating system anchored in the legendary, and mostly white-owned, joints of Central Texas. If the brisket isn’t any good, then the restaurant is only worthy of moderate praise. And if a barbecue joint doesn’t have great brisket, it won’t make our Top 50 lists.”

Vaughn’s barbecue awakening, according to the article, came after he visited Patillo’s Bar-B-Q in Beaumont, Texas, the oldest African American barbecue restaurant in the state dating back to 1912. The landmark is known for its handmade beef links, ribs and chicken, and like many old-school black barbecue restaurants throughout Texas, brisket isn’t on the menu.

“Barbecue is being redefined to what white standards of barbecue are,” said Adrian Miller, a food scholar who is writing a book that celebrates the contributions of African Americans to barbecue culture called “Black Smoke.” “There’s a wide world of barbecue out there, and it’s a little annoying that some people are exerting that there’s one way to make it.”

In researching “Black Smoke,” Miller was surprised to discover that the exchange of culinary knowledge between Native Americans and enslaved Africans was the root of American barbecue. Another historical injustice has been the ways in which women are diminished or erased from conversations about the origins of barbecue.

Women’s role in barbecue included everything from supervising and cooking the barbecue to making the side dishes. “In my own family, my mom would grill as often as my dad did,” Miller said. “She was taught by her dad.” 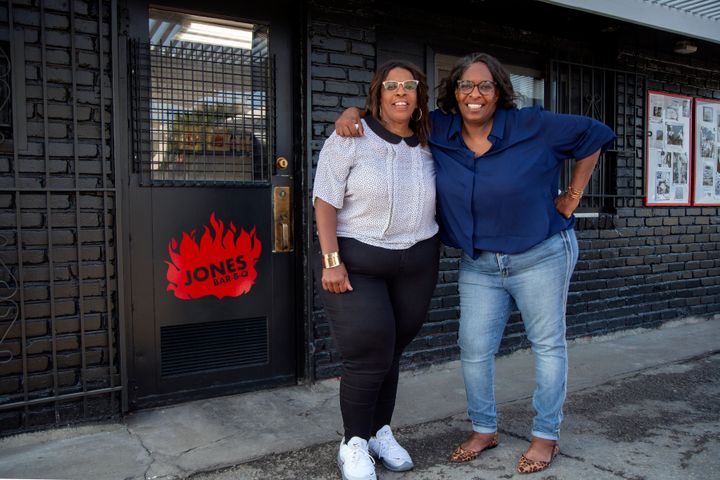 Like Miller’s mother, Deborah and Mary Jones of Jones BAR-B-Q in Kansas City, Kansas, learned about barbecue from their father. Though, for them, understanding barbecue was originally more about the skill than the art.

“When we started learning from our dad, it was something you could do to know how to survive,” Deborah said, explaining that in addition to learning how to smoke meat, they were taught how to cut grass, shovel snow and lay carpet. The sisters, who appeared in Season 3 of the hit Netflix makeover show “Queer Eye,” began picking up the basics of barbecue when they were just teens because their father, who opened the original Jones BAR-B-Q in the 1970s, believed his children should have several profitable life skills they could use to earn money during hard times.

The Jones sisters never set out to be the faces of female pitmasters. After the death of their father, they understood the value of continuing the work he began and decided to reopen the restaurant themselves — a pattern that Miller said is becoming rarer among children of pitmasters. They were also keen to carry on the family tradition because they’d both had the opportunity to attend college and pursue their own careers — Deborah retired from working with the postal service, and Mary was a nurse — before reopening Jones BAR-B-Q and getting behind the smoker full-time. “I think it was great that we had our own careers, but I’m glad that we had some back-up things, too,” Deborah said.

Taking over the family business came with a new set of challenges that the Jones sisters quickly learned to conquer, but Deborah admits that the biggest pressure is honoring their father’s legacy while living up to the attention they’ve received for working in a male-dominated industry. “There were big shoes to fill. There still is because you have to live up to being women pitmasters. It came at a good time because women are in good positions now,” she said.

The desire to leave a legacy inspired Oakland-based Matt Horn to make barbecue a way of life. Horn was born in Fresno, California, to a family with roots in Oklahoma, Louisiana, Alabama and Texas. He started his pop-up concept Horn Barbecue in 2015, leaving behind a career in retail to introduce his take on Texas-style barbecue to the Bay Area.

“You don’t have to necessarily be from Texas or be from North Carolina or Tennessee to get great food or to find people who have committed themselves and have committed their life to creating a product with passion or love,” Horn said. He prides himself on staying true to barbecue’s roots, refusing to cut corners and instead making hot links, sauces and dry rubs from scratch while also being mindful of where he sources his meat.

“When you put that love into anything you’re doing, it reflects in the final product,” Horn said. “When you cut corners, you’re cheating customers and guests that may come in.” 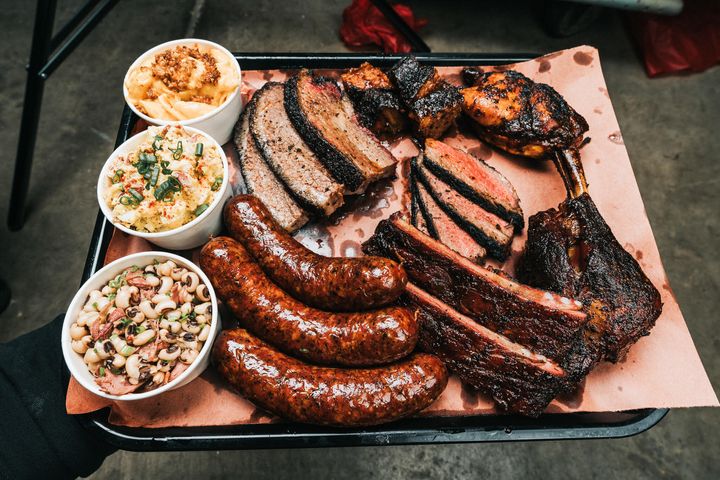 Equally important to Horn is supporting other black pitmasters across the country. He and a friend in Texas, for example, threw a fundraiser for award-winning barbecue chef Bryan Furman after his famed Atlanta restaurant B’s Cracklin’ BBQ burned down in March.

“That’s the thing about barbecue I love,” Horn said. “It brings people together, especially in America now with a lot of the stuff that’s going on. Barbecue is a great unifier.” But for barbecue to truly reflect its roots, Horn is calling on the media to change who and what they praise. “I’d like to see the diversity of barbecue more. There’s just as many cooks of color as there is any else, but the media likes to take the hipster route.”

Many African American pitmasters, both past and present, are finally getting the recognition they deserve, though it’s not nearly at the scale of their white counterparts. South Carolina’s Rodney Scott, for example, won the James Beard Award for Best Chef: Southeast for his whole hog BBQ.

But perhaps one of the biggest threats to the legacy of African Americans in barbecue is the gentrification of neighborhoods where many of these institutions are located. Brian Mays, the owner of Sam’s Bar-B-Que in Austin, Texas, made headlines in 2018 when he turned down several multimillion-dollar offers from developers to buy the land where his family business is located. In June 2018, Mays turned down a $3.5 million offer for the three lots on which the restaurant sits, and by October 2018, the offer had jumped to $5 million.

The restaurant, located in East Austin less than 10 minutes from downtown, used to be just one of the many black-owned businesses in the area. But now, Sam’s Bar-B-Que is one of only a few that still remain. Developers have torn down restaurants and replaced them with apartments or condos, but Mays told KXAN that his love for his community is worth more than the money: “If you’ve been in business for 43 years in community, you’ve go to love that community. They’ve been supporting you for 43 years. You can’t give up on them. You can’t just walk out on them. Why?”

Horn has made it his mission to educate his children about their barbecue heritage, saying, “My son has been with me to chop wood,” while Deborah is looking to keep Jones BAR-B-Q in the family despite the laborious profession being a tough sell for younger generations. “I’m trying to teach my niece and nephews the business because this is an intense job, but it can be done,” Deborah said, adding, “This is already established for them. They don’t have to build it and make it known. They just have to take care of it.”

And Miller hopes that younger people can begin to see the value of carrying on the legacy that has shaped a significant part of African American cultural identity. “I think barbecue is an art and I want to see the knowledge passed on to the next generation because I think it connects us to our ancestors,” Miller said. “We have centuries of people learning the skill and honing and really setting a standard for excellence in barbecue. I’d just hate for that to get obscured or lost or to have it die out.”