The Exonerated 5 join Ava DuVernay at the Emmys 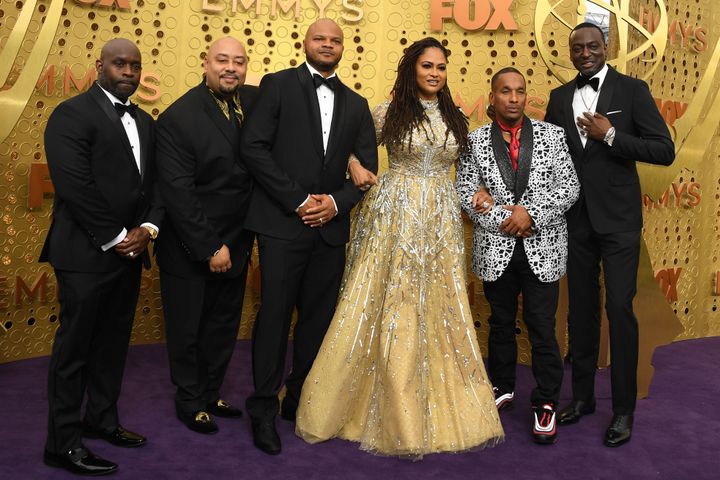 Ava DuVernay attended the 71st Emmy Awards ceremony on Sunday alongside the inspirations for her Emmy-nominated work.

The director brought the group of men who were wrongfully convicted of a 1989 Central Park rape — Antron McCray, Kevin Richardson, Yusef Salaam, Raymond Santana and Korey Wise — to the event on Sunday. The Exonerated Five, who were once known as the Central Park Five, are the subject of DuVernay’s “When They See Us” miniseries, which is up for Outstanding Limited Series.

“It was the most important thing for us to see each other’s story,” Salaam told E! News. “To humanize us in such a magnificent way was such an honor. ... This was the first time after almost a decade for us to have seen each other’s stories.”

Before she hit the carpet, DuVernay tweeted a photo of her “dates.”

The Exonerated Five have made appearances at awards shows in the past. In June, the group received a standing ovation at the BET Awards, where they each presented a line of dialogue in front of the audience.

“We are all on our own individual journey in life. We don’t know where our journey will take us or if (it) will collide with others. One day will bond me to these men for the rest of our lives. But I know that in telling our truth, our lives have been changed forever. Your truth is the foundation your legacy will be built on,” the group said.

The men, who are Black and Latinx and were aged 14 to 16 at the time of the incident, were coerced by detectives using scare tactics and manipulation into confessing to the brutal beating and rape of a 28-year-old white woman. They later recanted the admissions in court, but the media skewed their story as well, erroneously labeling the group as rapists before they could even get to trial.

DuVernay’s Netflix series marked the first time that the story had been told from the perspective of the Exonerated Five. It’s since been critically acclaimed for its deeply personal look into each of the individuals’ lives and its bold exposure of the pervasive racism within the criminal justice system. DuVernay herself has nabbed writing and directing Emmy nominations for “When They See Us.”

Several of the cast members from her miniseries are also up for acting Emmys.