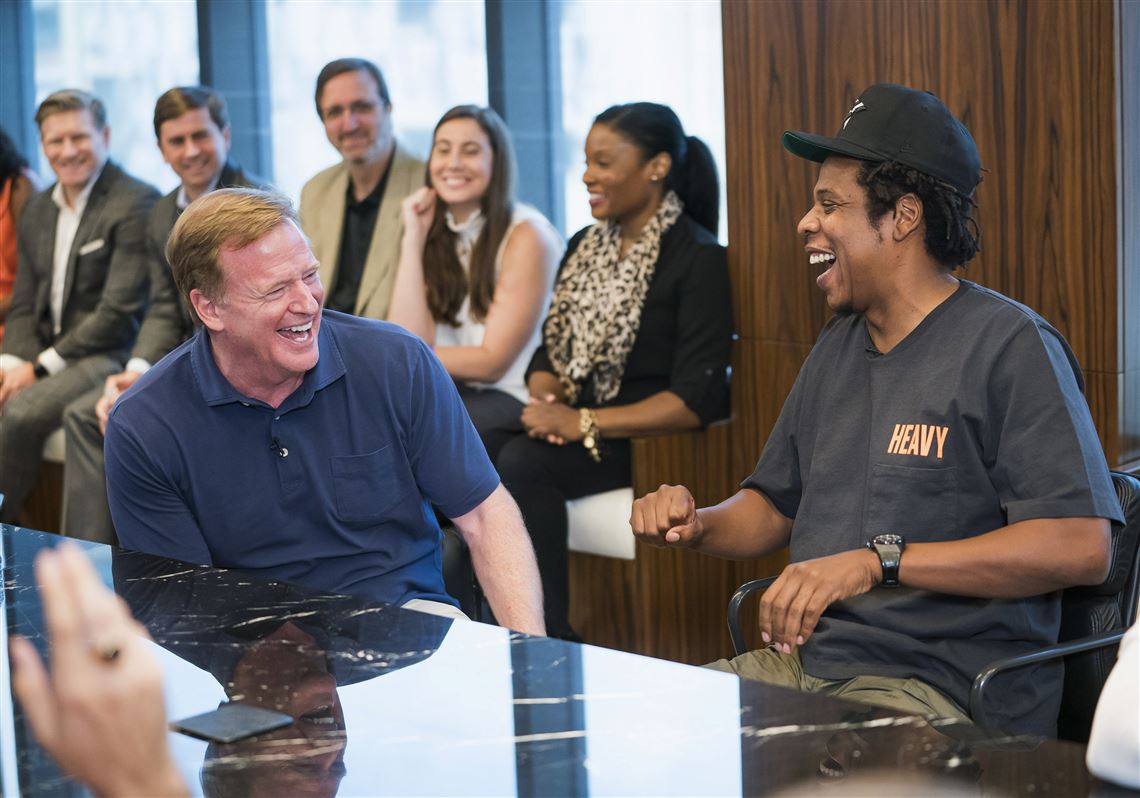 As part of its new long-term partnership with the NFL, Jay-Z’s entertainment company, Roc Nation, has launched an apparel line and a music project that will support programs under the league’s social justice initiative called Inspire Change. But given the NFL’s recent history on the issue, many people are skeptical of the move.

Many high-profile commentators criticized the initiative as hypocritical, accusing the league of blackballing Colin Kaepernick for leading peaceful protests against social justice issues by kneeling during the national anthem at NFL games in 2016.

That same year, Kaepernick’s organization Know Your Rights Camp began hosting camps for young people and teaching communities about their legal rights in police encounters. In January 2018, the activist announced he completed his pledge of donating $1 million to organizations helping underserved communities.

He has remained unsigned by an NFL team since he became a free agent after the 2016 season.

Roc Nation said proceeds from the Inspire Change apparel line will support organizations that are focused on the league’s efforts to address social justice issues, such as education and economic empowerment, police and community relations, and criminal justice reform, according to a press release.

Similarly, as part of the related music initiative called Songs of the Season, select artists will create music that will be used in NFL promotions. The songs will “debut during an in-game broadcast and will be simultaneously released to all digital streaming platforms worldwide.” All proceeds from the songs will go toward Inspire Change.

Carolina Panthers safety Eric Reid, who was the first NFL player to kneel in protest alongside Kaepernick, has been a vocal critic of Roc Nation’s partnership with the league.

″‘Let’s diffuse the uprising of Black voices demanding justice with concerts to “inspire change” that have nothing at all to do with real “action,”’” he wrote. ”‘It’s cool because our token black guy set up the concert.’”

“Let’s diffuse the uprising of Black voices demanding justice with concerts to “inspire change” that have nothing at all to do with real “action”. It’s cool because our token black guy set up the concert”

Kaepernick shared on Twitter Friday a highlighted paragraph from Robert L. Allen’s 1969 book “Black Awakening in Capitalist America” that discusses the role of capitalism in the oppression of Black communities.

He then shared the following quote from the book: “What [they] seek is not an end to oppression, but the transfer of the oppressive apparatus into their own hands.”

“What [they] seek is not an end to oppression, but the transfer of the oppressive apparatus into their own hands. “

Artists Meek Mill, Rhapsody and Meghan Trainor have been announced as the “first Inspire Change advocates of the 2019 NFL season,” Roc Nation stated. They will perform a free concert in Chicago’s Grant Park ahead of the NFL’s kickoff game featuring the Chicago Bears against the Green Bay Packers on Sept. 5.

Other Twitter users joined Reid in criticizing the recent announcement:

Peak NFL is blackballing someone for speaking up for racial injustice and then turning that shit into a t-shirt. Whew chile, the ghetto.

How do we stop racism, systematic oppression, and police brutality?Jay-Z and the NFL: Let’s sell t-shirts and throw concerts. That’ll really shake up the system.

Jay-Z and the NFL are partnering to profit off of “social justice” clothing.

I remember when Kaepernick donated his sneaker collection to homeless folks all over the Bay Area. I remember when he donated suits to former prisoners at Rikers, so they had clothes for job interviews. pic.twitter.com/TnoVWVIHIS

The NFL is now profiting off of what Colin Kaepernick started while simultaneously blackballing him. https://t.co/ma7xOml9B3

The “Inspire Change” tagline is telling. Jay-Z and the @NFL—with all of its power and billions of dollars—don’t seem to want to actually create any social change themselves. They just want to take the cause Kaepernick and others kneeled to illuminate, ban him, and profit. https://t.co/KRUDpPKbYe

I keep reading the NFL and Jay-Z announcement about their plans for Initiate Change but I struggle to interpret it as anything other than making a soundtrack and selling clothes to fix social injustice. That can’t be right, can it? I wanna be wrong, because that plan is weird.