Pop star Rita Ora showed a lot of skin and plenty of curves in her latest Instagram photo share. The British singer slayed yet another sensational look, pouring her jaw-dropping figure into a fabulous cut-out midi dress in a sensual brown color, which perfectly showcased her enviable curves.

The daring frock was a polo neck design that fit her like a glove, highlighting her hourglass frame. Adorned with a hypnotizing, maze-like white print, the figure-hugging number did very little to cover up her insane body, offering fans an eyeful of curves — and exposing a generous expanse of toned, bronzed skin. The eye-catching palette beautifully complemented her glowing tan, calling even further attention to her gym-honed physique.

Rita didn’t hesitate to flash the flesh in the bold outfit. For one thing, the dazzling midi dress was a one-sleeved number that showcased her sculpted shoulder and slender arm. However, the pièce de résistance was a massive keyhole cutout that slashed across her midsection, leaving a large portion of her trim midriff completely exposed. The cutout stretched all the way to her derriere, baring a significant section of her supple back. In addition, the skin-baring dress — which hemmed at the knee — featured a dramatic thigh-high slit on one side, offering a copious view of Rita’s chiseled pin. 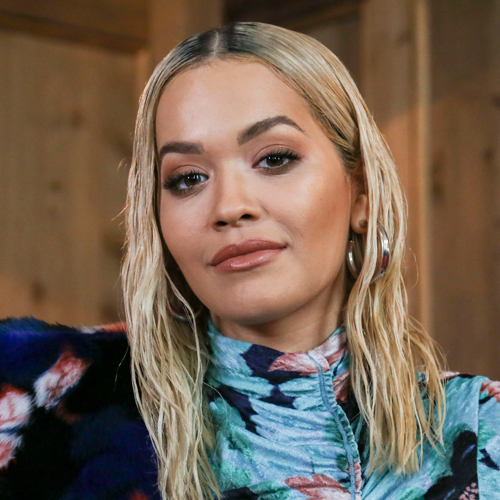 The “Only Want You” songstress showed off the sexy look in a photo-heavy update posted on Saturday afternoon. All in all, Rita shared a total of five snapshots, each of them giving a sultry look at the spectacular attire from a different angle.

The first snap shared with fans showed Rita flaunting her hourglass curves in a provocative pose that highlighted her round hips and sexy thigh. The photo was a low-angle shot that captured the Kosovo-born beauty from the mid-thigh up. Snapped against a beige-colored backdrop, the 29-year-old hottie cocked one hip to the side and looked down at the camera with provocatively parted lips, all the while putting her ripped abs and killer curves on display.

A swipe to the next slide saw Rita posing from the mid-profile — and flaunting her tiny waistline and curvy backside in the process. The shot appeared to be a behind-the-scenes look and portrayed the star getting her glam on as she prepared to head to an event. Rita was puckering her lips as makeup artist Marie Bruce, whom the star tagged in the photo, applied a coat of lip gloss to polish up her glamorous look.

The third pic was also a low-angle shot; however, this time around, the focus was not on the frock’s seductive slit, but rather on its ultra-revealing cutout. Rita proudly showed off her washboard abs and voluptuous hips in the head-turning snap. The same attributes were amply showcased in the next picture as well, but from a frontal angle that shone the spotlight on her perky chest.

The fifth and final pic was a close-up shot that was cropped to her ripped abs and busty assets. Fans could even argue that the smoldering look was a braless one, as the “Hot Right Now” hitmaker didn’t appear to be wearing any kind of support underneath the curve-clinging dress.

Rita followed up with another collection of five photos that offered a more detailed view of her attire, footwear and all.

Thank you for having me back @capitalofficial love yaaaaa!

According to the Daily Mail, Rita wore the memorable outfit earlier today at Capital’s Jingle Bell Ball 2019, which is being held this weekend at The O2 Arena in London, U.K. The “Shine Ya Light” singer teamed up the stylish dress with matching knee-length stiletto boots — an open-toe design that sported the same print and color as the striking frock. Rita added bling to her attire with chunky hoop earrings and an entire collection of sparkling bracelets and rings. The British bombshell also sported a bedazzled manicure that played well with her silver jewelry.

“The singer worked her blonde tresses up into a statement twist, while leaving the rest of her locks to cascade down her back in a sleek fashion,” noted the Daily Mail.

Her makeup was also on point, as Rita highlighted her gorgeous features with a chic winged eyeliner and a dab of pink lip gloss.

As expected, her original post stirred a lot of reaction on Instagram, garnering close to 168,000 likes from Rita’s adoring fans. In addition, 1,250 people dropped by the comments section to throw out praise for the sizzling look.

Among the Instagrammers who commented on Rita’s post was fellow singer Bebe Rexha.

“Insane body,” she wrote, with 74 people agreeing to her post.

“Did you intend to kill me or…,” chimed in another Instagram user, clearly entranced by Rita’s smoking-hot look.

“Should be illegal to look that amazing,” declared another fan.

“LITERALLY HOW ARE YOU EVEN REAL,” penned a fourth person.