Regina King on the relevance of racial injustice in 'Watchmen': 'Same shit's going down' 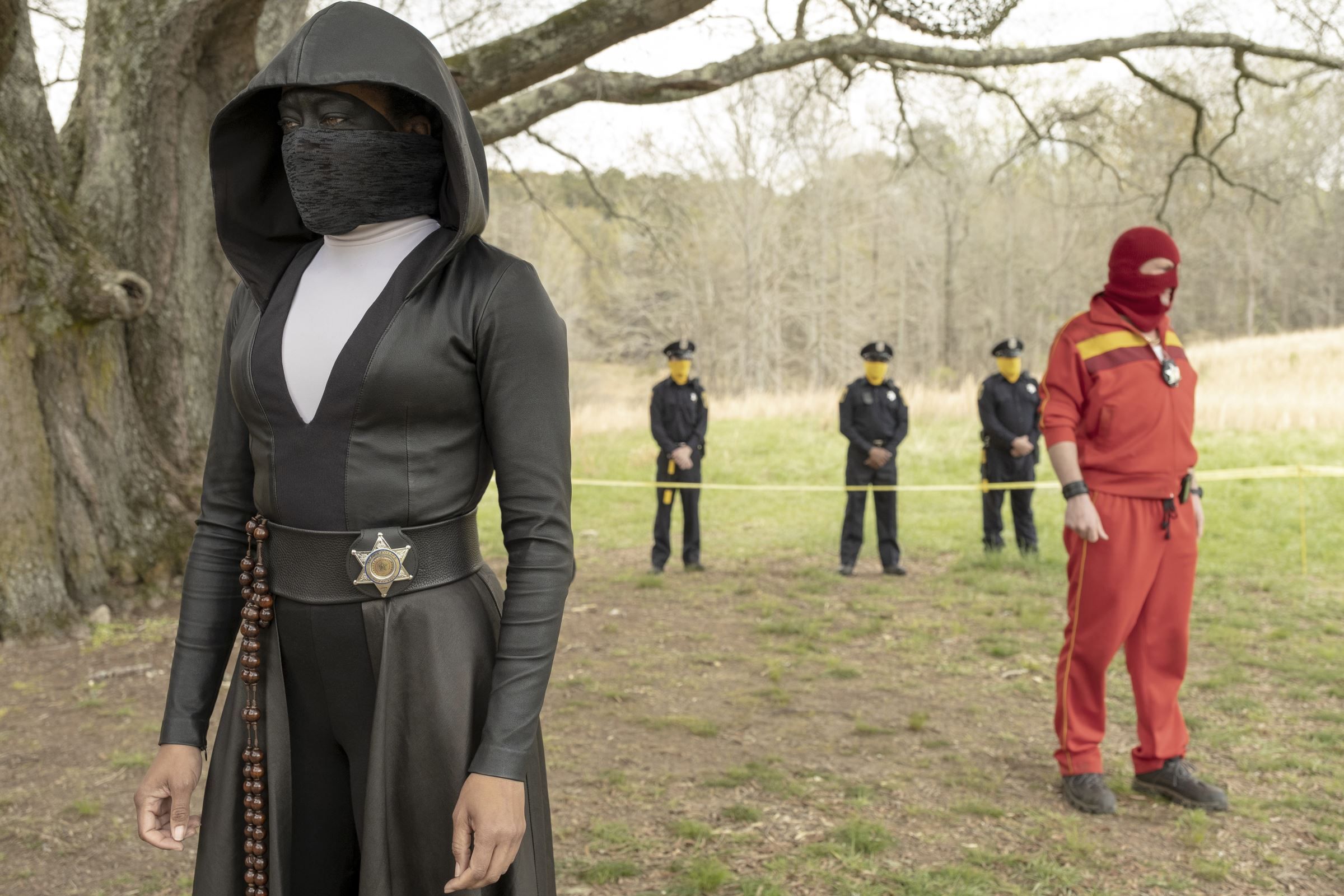 Less than a year after the fall debut of Watchmen, the hit HBO limited series that expands on the seminal 1986 graphic novel has proven uncannily prescient.

Suddenly its masked heroes — cops forced to shield their identities after a KKK-like white supremacist group known as Seventh Kavalry murdered the vast majority of the police force — roaming the streets of Tulsa, Okla., don't look the slightest out of the ordinary in the grips of the coronavirus pandemic.

"It's funny because a girlfriend of mine just sent a picture of Sister Night to me and said, 'Who knew your costume was going to be our go-to grocery store attire," Watchmen star Regina King told Yahoo Entertainment in an interview last week promoting the series' new Blu-ray release of Damon Lindlelof's "remix" of the famed and influential superhero graphic novel. King has not been wearing Sister Night's famed balaclava out in public recently, but has she does rock a Watchmen-themed facial mask adorned with a squid logo that was given out to attendees at the show's October red carpet premiere.

Sadly, there are other deep and tragic connections between Watchmen and the contemporary world. The series, which launches from the real-life 1921 Tulsa Massacre, rings strikingly true in its portrayal of American racism. And it returns following a demoralizing string of high-profile of racial incidents in the U.S. over the past two months: the shooting death of Breonna Taylor in her home by Kentucky police; the slaying of Ahmaud Arbery in rural Georgia; the falsified 911 call made against Central Park birder Christian Cooper; and the galvanizing killing of George Floyd, whose death while being detained by Minnesota police resulted in murder charges against one officer and has touched off a historic spate of protests and uprisings across the country and overseas.

"Look, we're talking about 1921, this happened," says King, 49, who won an Academy Award in 2019 for her role in If Beale Street Could Talk and is also known for Jerry Maguire, Ray, American Crime and her Emmy-winning turn in HBO’s The Leftovers. "Cut to [today], same s***'s going down. There's the same mentality happening. We're not having another massacre, but it feels like we're having little mini-massacres all around."

Watchmen creator Damon Lindlelof (Lost, The Leftovers) was inspired to open the series with the Tulsa race massacre — in which mobs of white residents attacked the city's Greenwood District, then known as "Black Wall Street," leaving the area destroyed, dozens (if not hundreds) dead and thousands homeless — after reading about the historically buried incident in Ta-Nehisi Coates's 2004 article "The Case for Reparations" in The Atlantic.

"It struck something in him emotionally," says King, whose Angela Agbar (aka Sister Night) leads Tulsa's charge against the Seventh Kavalry while also thwarting plots to kidnap Dr. Manhattan, a legacy character from Alan Moore and Dave Gibbons original source material.

Google searches for the Tulsa massacre shot up as HBO's aired of Watchmen's first episode — with many viewers expressing shock that the incident, virtually ignored in history books even though it has been called "the single worst incident of racial violence in American history," was actually a real event. There were no convictions for any of the violent offenders.

In Watchmen's 2019 Tulsa, the city is still on edge, particularly three years removed from a coordinated attack from Seventh Kavalry on the city's police force. But in this reality, it's another celebrity — not Donald Trump — who's president: Robert Redford. (A major point of contention between the city's white and black populations is the slavery reparations — or "Redfordations" — that have been doled out to the latter.)

Redford does not actually appear in the series, much to King's chagrin.

"That was one of the first questions I asked, 'Is Robert Redford going to be in the show?,'" King laughs. "I totally sounded like a 12-year-old. I think they may have reached out to him. I don't know what the exchange was, but in my 12-year-old hopes and dreams, just in my mind that Robert Redford could be threatening an appearance was exciting."

King was excited about the public's response to the series, particularly when it came to all the reactions (and "mind-blown texts") she received to the shocking late-season revelations (last chance for spoiler warnings!), including Angela's husband Cal (Yahya Abdul-Mateen II) unveiling as Dr. Manhattan and hints that she may have inherited his extraordinary powers.

"I think the writing team did an awesome job of setting that up where most people didn't see that coming," says King, recalling that they filmed scenes in Georgia with Abdul-Mateen II in full blue Manhattan makeup. "We had a couple dummy Dr. Manhattans on set so any eyes outside would be focused in on the fake Dr. Manhattan, not Yahya as Dr. Manhattan. But I was surprised that we were able to keep it under wraps that long."

Response to the series has been rapturous — but it's also come with a side of disappointment that Watchmen was planned as only a nine-episode, one-and-done series, with Lindelof leaving after the first and only season. Yet hope grew among fans that a second season (or at least more episodes) could be potentially be in the cards when HBO re-classified Watchmen from a "drama series" to a "limited series," including "possible future installments."

King says she'd certainly be game to return — though it also sounds like that'd be contingent on Lindlelof coming back as well.

"I feel like 'Never say never,'" the actress says. "I do feel like we don't want it to be done unless it can be on par with the first season. And I just feel like that's a really tall order. But if anyone can fill that order then I think Damon Lindelof can. I think we all as castmates feel like if Damon leads, we'll follow.