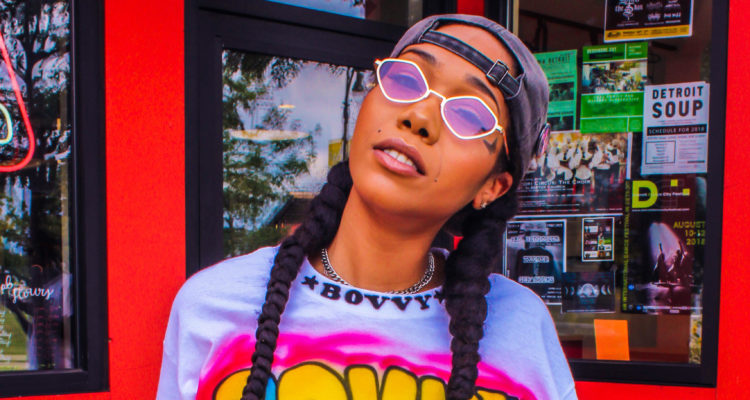 Detroit-based rapper Tiny Jag pulled out of a Detroit, MI music festival this week after she learned that white concert-goers would be charged a higher price than people of color.

Jag, also known as Jillian Graham, told the Detroit Metro Times that she found out about AfroFuture Fest's pay model when a white friend reached out to her and sent her a screenshot via Instagram that outlined the pay difference. The early bird POC ("people of color") ticket was $10 while the early bird "non-POC" ticket cost $20.

"I was immediately enraged just because I am biracial," Graham told the Metro Times. "I have family members that would have, under those circumstances, been subjected to something that I would not ever want them to be in ... especially not because of anything that I have going on."

The organizers of the event are upfront that they are charging different prices based on race, including sharing artwork on social media with a caption about early-bird tickets that reads, “Early Bird POC Tickets are $10 & $20 for NONPOC’s & on sale until JULY 17th.”

OFFICIAL LINE UP For Afrofuture Fest IS HERE✨✨✨

Jag said it was hard to cancel the show, and apologized to her fans.

"It’s not fun to withdraw out of shows, especially at home, especially in your hometown, and especially when your supporters have been so good to you," she says. "It’s also not fun to do that to my fellow Black women, like that sucks too. It sucks that this is a thing that’s put a wedge here."

AfroFuture Fest shared a message on their event page on ticketing site Eventbrite, explaining their price discrepancy. They explained that their ticket structure was built to ensure people in the community would have an equitable chance to enjoy the event.

WHY DO WE HAVE POC(PEOPLE OF COLOR) AND NONPOC(WHITE PEOPLE) TICKETS? I'M GLAD YOU ASKED!

EQUALITY MEANS TREATING EVERYONE THE SAME

EQUITY IS INSURING EVERYONE HAS WHAT THEY NEED TO BE SUCCESSFUL

OUR TICKET STRUCTURE WAS BUILT TO INSURE THAT THE MOST MARGINALIZED COMMUNITIES (PEOPLE OF COLOR) ARE PROVIDED WITH AN EQUITABLE CHANCE AT ENJOYING EVENTS IN THEIR OWN COMMUNITY(BLACK DETROIT).

AFFORDING JOY AND PLEASURE IS UNFORTUNATELY STILL A PRIVILEGE IN OUR SOCIETY FOR POC AND WE BELIEVE EVERYONE SHOULD HAVE ACCESS TO RECEIVING SUCH.

WE'VE SEEN TOO MANY TIMES ORGASMIC EVENTS HAPPENING IN DETROIT AND OTHER POC POPULATED CITIES AND WHAT CONSISTENTLY HAPPENS IS PEOPLE OUTSIDE OF THE COMMUNITY BENEFITING MOST FROM AFFORDABLE TICKET PRICES BECAUSE OF THEIR PROXIMITY TO WEALTH.

THIS CYCLE DISPROPORTIONATELY DISPLACES BLACK AND BROWN PEOPLE FROM ENJOYING ENTERTAINMENT IN THEIR OWN COMMUNITIES.

AS AN AFROFUTURIST YOUTH LEAD INITIATIVE THE VOICES OF OUR YOUTH INFORM OUR RESISTANCE.

HERE'S WHAT THEY HAVE TO SAY

We’ve reached out to Tiny Jag and AfroFuture Fest for comment.