“Ragged Old Flag” Super Bowl 2020 Spot Under Fire: “A Slap in the Face” to Colin Kaepernick 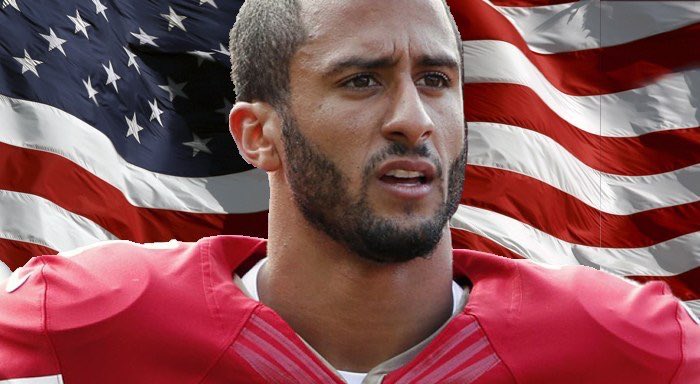 In what may be a Super Bowl record, the NFL managed to make viewers angry with 30 minutes to go before the Super Bowl 2020 kickoff with a new commercial set to Johnny Cash’s “Ragged Old Flag.”

The three-minute ad followed Medal of Honor recipient Kyle Carpenter and other members of the military as they reflected on their service, but not everyone came away with good vibes.

While the NFL’s “Ragged Old Flag” ad didn’t specifically mention Colin Kaepernick, many viewers felt that the commercial was a way of throwing some not-so-subtle shade at the former San Francisco 49er. As one viewer put it, “That ragged old flag bit was the stinkiest propaganda piece I’ve ever seen.”

During the Super Bowl 2020 pregame show, Fox aired a commercial starring Kyle Carpenter, a retired U.S. Marine who received a Medal of Honor in 2014 after he was injured in Afghanistan. Images of the American flag flashed on screen as Carpenter and a few female NFL owners, including Kansas City Chiefs owner Norma Hunt, recited verses from the Constitution and reflected on Johnny Cash’s “Ragged Old Flag.”

The commercial didn’t specifically mention former San Francisco 49er Colin Kaepernick, who drew the world’s attention when he protested police brutality by kneeling during the national anthem, many viewers felt that the implication was clear. “This 90% white people ‘ragged old flag’ piece is bullshit,” tweeted one viewer. “This old flag was a wonderful slap in the face of Colin Kaepernick,” wrote another.

ICYMI: That whole bullshit flag segment in the pregame was about @Kaepernick7. Because NFL owners are more patriotic than you. It was, of course, followed by the crowd doing the tomahawk chop. #MayosHeartlandValues

I love Johnny Cash & “Ragged Old Flag” & that was a beautiful commercial that just aired on Fox ... but because of the double meaning behind it - it was basically a fuck you to Colin Kaepernick it’s also one of the most inappropriate things I’ve seen broadcast on this stage. #NFL

Of course, there were also plenty of positive reactions to the NFL’s “Ragged Old Flag” commercial. “The best part of the Super Bowl,” wrote one fan. “Inject it into my veins please,” said another.

This pre game American commercial with Kyle Carpenter with Johnny Cash singing Ragged Old Flag in the background is already the highlight of the Super Bowl. This is incredible 😭😭

The best part of the Super Bowl was that message with Kyle Carpenter and the song "Ragged old flag." Incredible. 🇺🇸🇺🇸

Watch the NFL’s Super Bowl 2020 “Ragged Old Flag” commercial in the clip below.