Public Enemy have fired founder member Flavor Flav following a dispute over the group performing at a Bernie Sanders rally, bringing to an end one of the most colourful partnerships in rap history.

A statement said the group would be “moving forward without Flavor Flav. We thank him for his years of service and wish him well.”

Chuck D, the group co-founder and core member, added on Twitter that he had been sued by Flav’s lawyer on Friday, “so now he stays home & better find rehab”.

The rally performance took place on Sunday with core member Chuck D performing as Public Enemy Radio. Following the announcement of the show last week, lawyers for Flavor Flav said the rapper “has not endorsed any political candidate in this election cycle”, adding that Sanders was not authorised to use the group’s image without Flav’s permission: “While Chuck is certainly free to express his political view as he sees fit – his voice alone does not speak for Public Enemy.” Flav appended the letter with a handwritten note reading: “Hey Bernie, don’t do this.”

In the wake of the legal letter, but before the dismissal, Chuck D had said: “Flavor chooses to dance for his money and not do benevolent work like this. He has a year to get his act together and get himself straight or he’s out.”

Following the dismissal, Chuck D argued that Flav’s decision was about money rather than politics. “My last straw was long ago,” he wrote on Twitter. “It’s not about Bernie with Flav … he don’t know the difference between [American football player] Barry Sanders or Bernie Sanders … So I don’t attack Flav on what he don’t know.

“If there was a $bag, Flav would’ve been there front & center. He will not do free benefit shows.” He complained of a lack of support from Flav for an earlier fundraiser by Harry Belafonte for the social justice organisation Sankofa, calling Flav “ungrateful” and accusing him of judging a bikini contest instead. 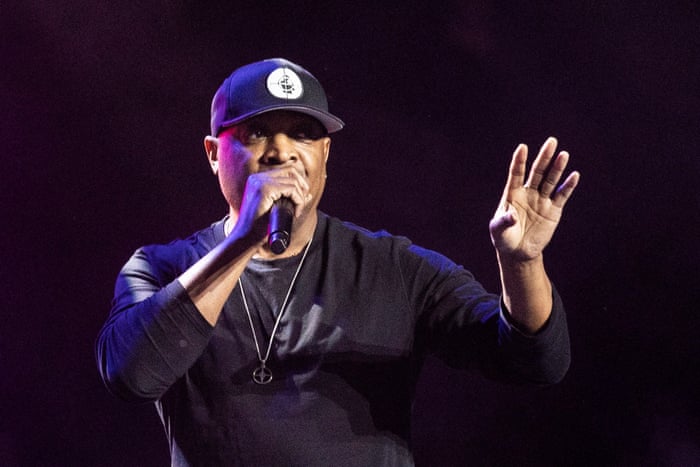 The dismissal ends an enduring and characterful partnership, where Chuck D’s withering political screeds were offset by Flav’s animated punchlines and outlandish image, featuring outsize clocks worn around his neck.

The pair met on the New York hip-hop scene in the mid-1980s, Chuck D initially getting Flav a job moving furniture for his father’s delivery company. After teaming up with production outfit the Bomb Squad, and adding strikingly martial choreography by peripheral members the S1Ws, Public Enemy recorded tracks including Fight the Power that pushed rap music into political territory while remaining commercially successful.

The group’s DJ, Terminator X, left in 1998 and was replaced by DJ Lord. Supporting member Professor Griff left in 1989 after causing outrage with homophobic and antisemitic comments.

Chuck D and Flav previously clashed in 2017, when Flav sued Chuck D and the group’s management company, Eastlink, over unpaid earnings. The case against Chuck D was dismissed in January 2019; the Eastlink case was also dismissed but is being appealed. Flav’s latterday fame has mostly been from reality TV, in the shows The Surreal Life, Strange Love and Flavor of Love.

On the day of the Sanders rally, Chuck D offered muted support for the potential presidential candidate. “I dig aspects of Bern,” he wrote on Twitter. “Hate the party Bulsht. But can relate to half the issues & get forward. Use your minds & be ready to fight whoever in office … Wake the fcuk up get off your asses make yourself important where you live.”