President Trump Came to Chicago With Insults. For Chicagoans, the Feeling Was Mutual. 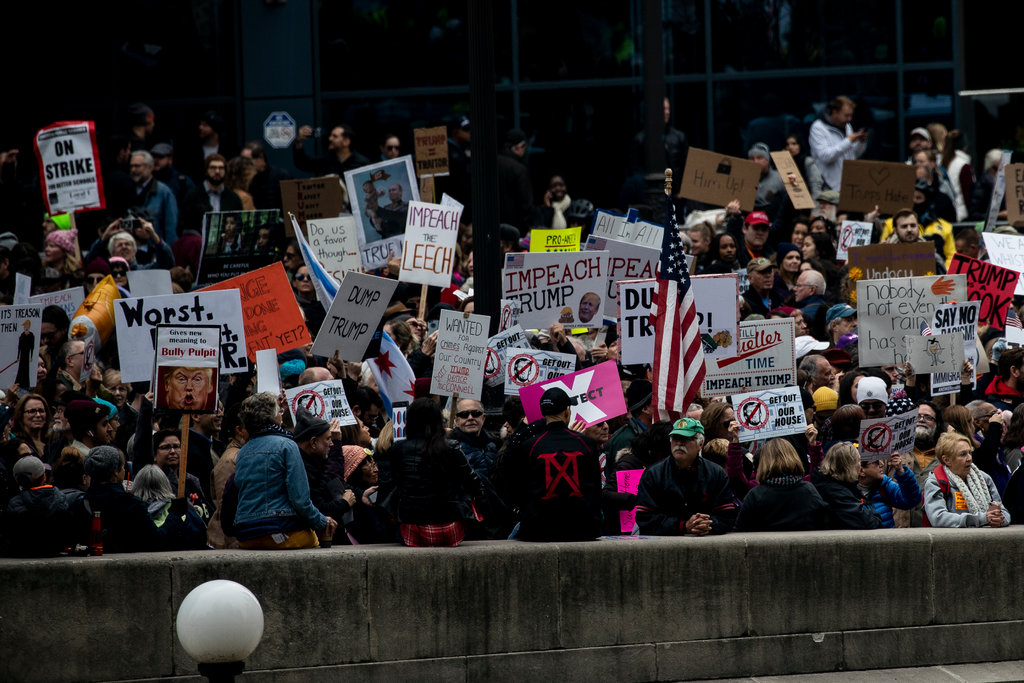 “He’s not welcome in our city,” said Pam Capraro, 65, as she walked along the Chicago River to join a chanting, singing, sign-waving, occasionally sousaphone-playing crowd outside the Trump International Hotel & Tower. “He represents everything that Chicago isn’t — racism, sexism, xenophobia.”

She flicked her hand dismissively in the direction of the Trump building, where the president’s name is emblazoned in jumbo letters on one of its glassy sides. “Why is that even here?”

On Monday, President Trump arrived in Chicago for the first visit of his presidency, delivering a speech to a conference of police chiefs that denounced the city in biting and personal terms. 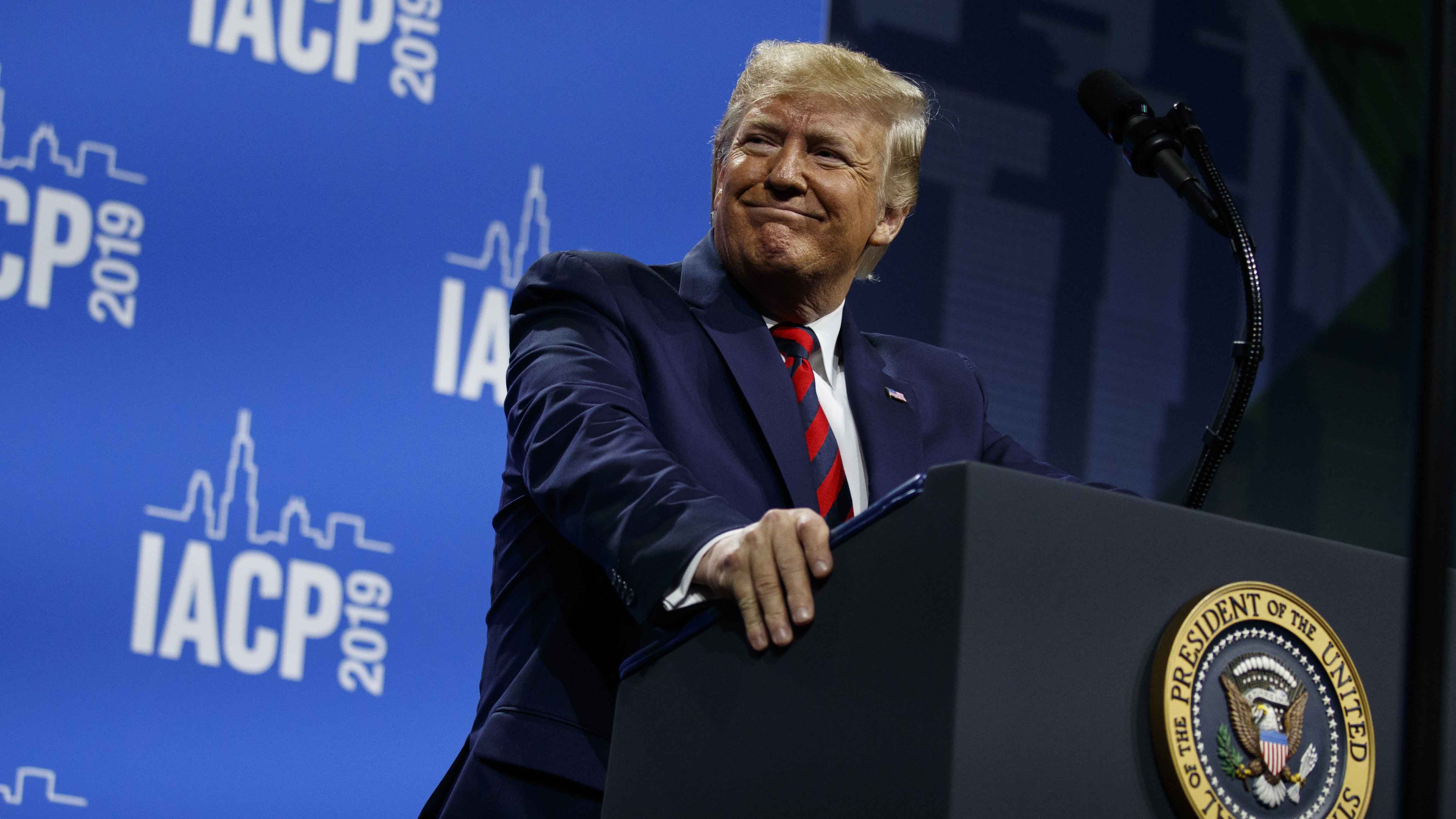 He called the values of Chicago’s police superintendent, Eddie Johnson, who had pointedly skipped the president’s address, a “disgrace.” He criticized the city’s open stance toward immigrants. He said Chicago was notorious around the globe for its violence. “It’s embarrassing to us as a nation,” Mr. Trump said. “All over the world, they’re talking about Chicago.”

In Chicago, where Mr. Trump won less than 13 percent of the vote in 2016, residents responded with equal contempt, gathering by the thousands outside his curvy skyscraper on the river downtown, where he later attended a private fund-raiser.

Protesters hoisted rainbow-colored letters spelling “Resist” with the famous corncob-shaped Marina City towers standing in the background. Some in attendance wore red, the color representing Chicago’s public schoolteachers, who have been on strike for eight days in a dispute with the city administration. One man held a small sign to his chest that simply read “Go away.”

The police shut down entire blocks of Upper Wacker Drive, one of downtown’s major thoroughfares, leaving the Loop unusually choked with traffic. 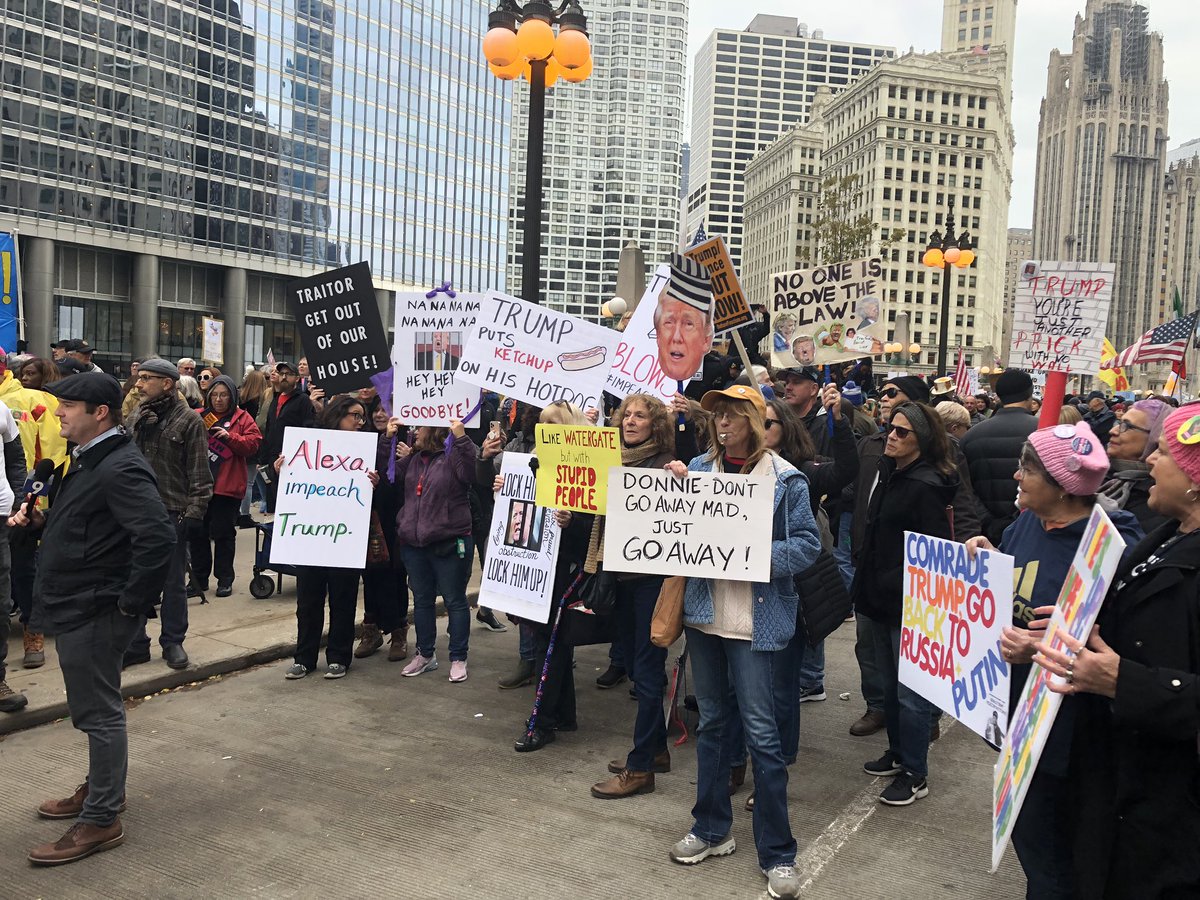 Marsha Durbin, a registered nurse who lives in Indiana and wore a Trump T-shirt, said she was determined to defend the president’s name in the face of an overwhelmingly liberal crowd. “I think he’s doing a great job,” she said. “We would have globalism without him. And thank God he’s here addressing the violence problem.”

But for many Chicagoans, the gathering had a cathartic, festive feel, with a brass band playing, children dancing and many in the crowd chanting in praise of their city. (“What city protects democracy? Chicago!”)

Ian Wallace, a 38-year-old stay-at-home parent from the Old Town neighborhood whose children attend public elementary school, said he was drawn to the protest to stand against Mr. Trump, his policies and his frequent attacks on Chicago.

“We wanted to show our disappointment with him,” Mr. Wallace said beside three of his children. “There’s a lot of negative things you hear about Chicago, and it’s almost always from someone who doesn’t live here. We love our city.”

Mr. Trump in recent weeks has been showing up in places where he is unpopular, including the San Francisco Bay Area and Minneapolis, and in his brief day trip to Chicago on Monday, he mostly avoided its residents in favor of out-of-town conference attendees.

Last week, Mr. Johnson, the superintendent, said he did not plan to attend Mr. Trump’s speech to police leaders because it “doesn’t line up with our city’s core values, along with my personal values.”

“I can’t in good conscience stand by while racial insults and hatred are cast from the Oval Office, or Chicago is held hostage because of our views on New Americans,” he said in a statement.

Speaking to the International Association of Chiefs of Police, Mr. Trump questioned Mr. Johnson’s values and said he protected illegal immigrants in a violent city.

“Here’s a man that could not bother to show up for a meeting of police chiefs, the most respected people in the country, in his hometown and with the president of the United States,” Mr. Trump said. “And you know why? It’s because he’s not doing his job.” 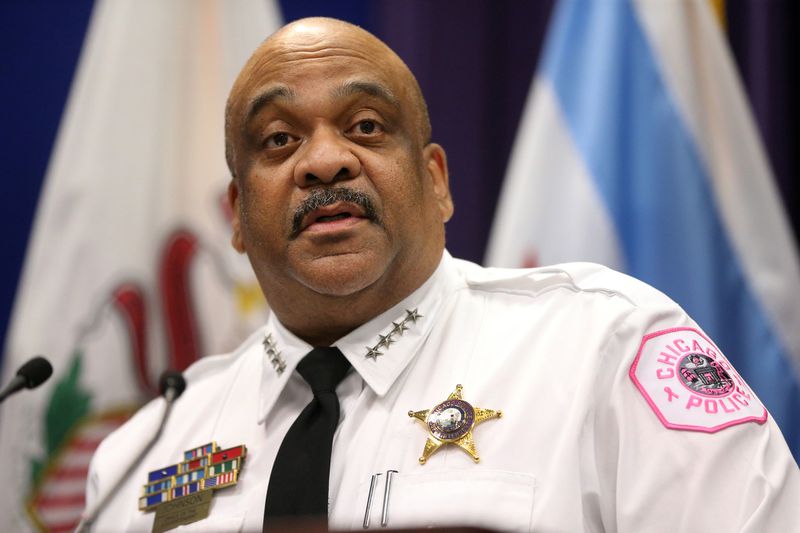 Mr. Johnson called a news conference to rebut Mr. Trump, pointing out that homicides and shootings have seen double-digit percentage declines in recent years. Chicago has more murders than Los Angeles or New York does, but it has significantly fewer than it did in 2016, when there were 762 murders in the city.

“Today, the same police officers the president criticized for their inability to protect this city spent all day protecting him,” Mr. Johnson said.

Mayor Lori Lightfoot chimed in on Twitter: “Rather than belittle Chicago’s communities with hateful and dishonest rhetoric, he needs to go back to D.C. and face his fate.”

Mr. Trump has frequently criticized Chicago and its crime rate, but he had avoided the city since being elected. In March 2016, he planned a rally in the city but, facing heavy protests, canceled it just before it was scheduled to begin.