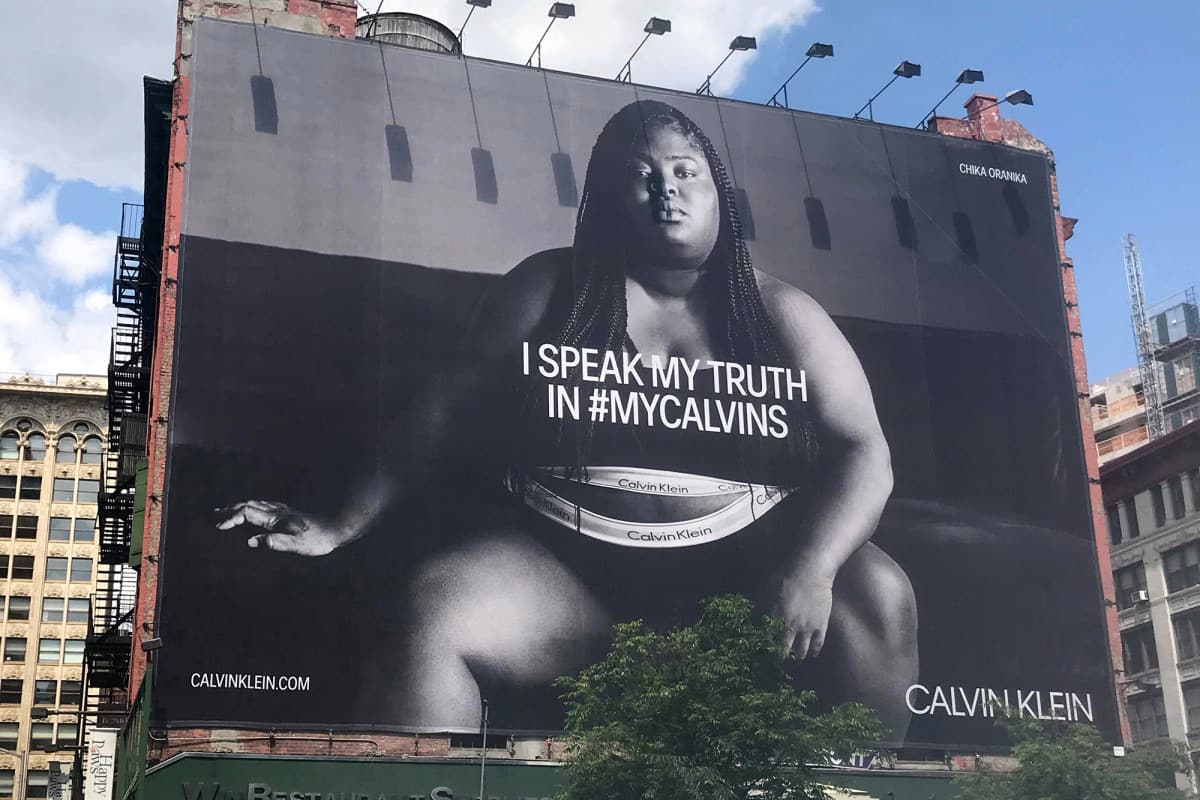 Apparently Chika speaks her truth in or out of her Calvins.

On Tuesday, self-described conservative and “Brexiteer” Dominique Samuels posted a picture of a Calvin Klein billboard featuring Indie rapper Chika Oranika in the designer’s bra and underwear to Twitter. “Out of all the black plus-size models that exist, you just had to pick the one that looks 5 minutes from diabetes to promote unhealthy living, Calvin Klein? You should be ashamed,” Samuels wrote.

Why do we need the morbidly obese to speak the truth in their Calvins? Out of all the black plus-size models that exist, you just had to pick the one that looks 5 minutes from diabetes to promote unhealthy living, Calvin Klein?

You should be ashamed. 🤦🏽‍♀️ pic.twitter.com/Gy21NTQ56f

I’ve got no problem with avg curvy bodies being represented in fashion. The avg size of a woman is around 14-16. This isn’t that. It’s not representing women. It’s participating in this dumb woke culture that needs to die out fast.

Samuels’ tweet incited a heated debate among thousands of users, with some of the discussions focusing on conflating diabetes with weight and stigmatizing obesity.

ma’am I have diabetes and I am half your size

Oranika, who went viral in April 2018 for her freestyle to Kanye West’s “Jesus Walks,” added her two cents to the conversation by sharing the tweet and writing “someone’s mad they’re not on a billboard.”

Someone’s mad they’re not on a Billboard. 🥺 https://t.co/Kyk1GEJ3XD

people being shitty doesn’t bother me anymore because i see it as a mental disorder.

it’s just weird and very annoying to do this every few months. unprovoked.

i’m tired of waking up to this shit.

for those so worried about me:

2.) PCOS affects 1 in 10 women, causing weight gain, fertility issues, and other annoying things. i’ve had it since i started puberty.

To get her message across all platforms, she took to Instagram, sharing a screenshot of her Twitter response and captioning the photo: “we still doing this? lololol”

we still doing this? lololol

And instead of invalidating Chika’s beauty, Samuels helped it to become more apparent that standards are definitely shifting as many showed their support for the rapper on the rise.

She is sooo pressed. As soon as I saw it I said damn that’s sis who used to make the freestyle videos 😍🥰 keep going!!!

I'm saddened that she came for you. I'm glad you on the billboard. Keep pushing keep doing you!

Just like being overweight doesn't automatically mean you are unhealthy, being skinny doesn't mean you are healthy. I'm overweight and just had a full physical and no evidence of high blood pressure, high cholesterol or diabetes.

The ad in question, located in Manhattan’s Soho neighborhood, first made waves at the end of August and appeared to show an attempt by Calvin Klein to reach an audience that is increasingly valuing inclusion.

“We believe the most compelling and engaging campaigns are those that embrace not just diversity of race, body type, sexual orientation or gender identity, but also diversity of opinion and experience,” Calvin Klein Chief Marketing Officer Marie Gulin-Merle told the New York Post.

In an interview with InStyle following the photo shoot, Oranika said she was surprised she was given this type of opportunity, but she knew it would be too important to pass up.

“When I first heard I would be ‘in my Calvins’ there was hesitation," she told the magazine. "I’ve never wanted my career or message to center around my body and I knew it could bring a lot of attention. But, the more I thought about it, I felt it was integral that I practice the same self-love and boldness that I preach. That made the day a breeze for me. I knew I was doing something to help push an important statement."