Just days after a grand jury issued no charges against the Louisville officers who fatally shot Breonna Taylor, evidence from the case is leaking out on social media and digital news sites, raising questions about the investigation into her death.

Video footage reviewed by The Courier Journal appearing to come from body cameras worn by Louisville Metro Police officers at Taylor's apartment March 13 shows potential violations of policies designed to maintain the integrity of the investigation.

In a clip posted Saturday by the digital site VICE News, former Detective Brett Hankison can be seen entering Taylor's apartment while investigators are inside working the scene after her death.

Hankison was one of three officers who fired their guns at Taylor's apartment that night, and he was subsequently fired and charged with wanton endangerment when some of his bullets went into an occupied apartment next to Taylor's.

Hankison, Sgt. Jonathan Mattingly and Detective Myles Cosgrove fired more than 30 rounds after Taylor's boyfriend, Kenneth Walker, fired one shot when the officers broke in the door while trying to serve a "no-knock" search warrant. Walker said he didn't realize it was police. 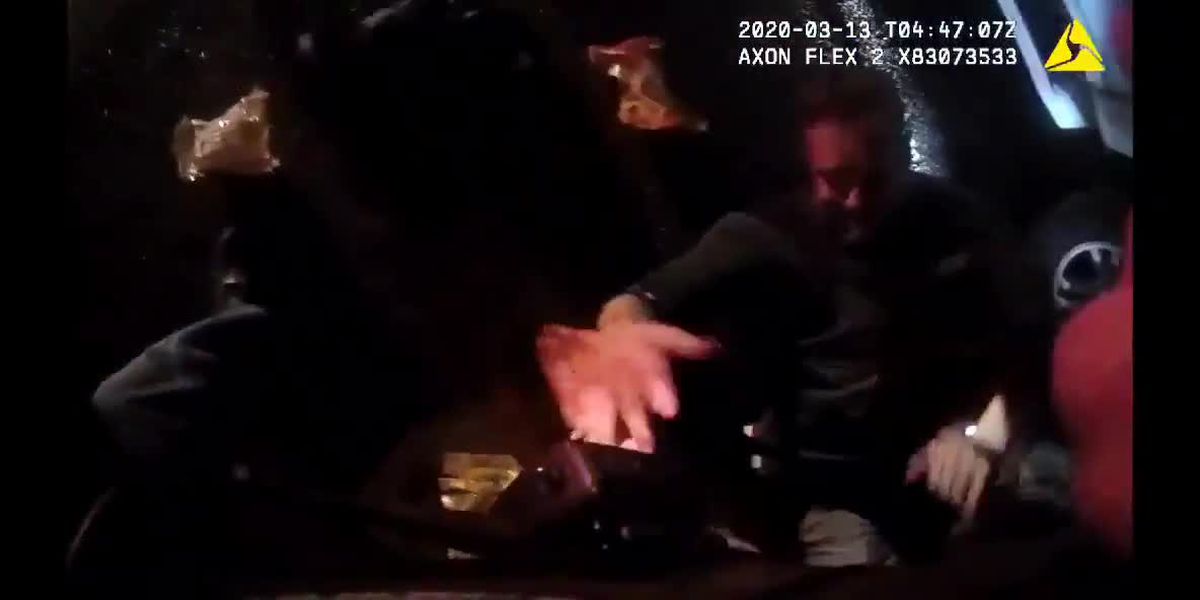 In the body camera footage posted on VICE, Hankison can be seen about a shell casing on the ground, saying, "That's theirs?"

"That's ours, it looks like," an unidentified officer responds, before telling Hankison to "back out until they get PIU (the Public Integrity Unit) in here."

Hankison doesn't exit right away, instead asking, "Are there any guns visible?" as he shines a flashlight into the apartment. He then asks if there's a "long gun."

The former detective's presence at the crime scene would violate LMPD policies intended to keep away officers involved in a shooting from the active investigation.

The video and other evidence from the Taylor investigation have been tightly guarded.

For months, Louisville Mayor Greg Fischer's administration and LMPD have refused to release documents in the investigative file, prompting The Courier Journal to sue for access.

LMPD spokesman Lamont Washington declined to comment Sunday, stating the investigative "file has not been released by the department at this time." He added LMPD's "internal review" of the case is ongoing, so it would be inappropriate to comment.

Spokespeople for Fischer did not immediately respond to an emailed request for comment.

Kentucky Attorney General Daniel Cameron also has declined to release the evidence in his investigation. He outlined his office's findings Wednesday after the grand jury announced its indictments, but didn't make public any supporting evidence.

But over the weekend, other videos have surfaced on social media, including an unidentified officer walking to the door of Taylor's apartment and asking, "Is anybody here dead?"

Wilson told reporters Sunday he obtained the footage from Sam Aguiar, an attorney for Breonna Taylor's family, who helped negotiate the family's $12 million settlement with the city. He called on Aguiar to release more of the records he'd obtained under seal, despite the settlement's requirement that attorneys destroy that evidence.

Wilson has a pending harassment lawsuit filed in federal court against Hankison. Aguiar is his lawyer in that case, taking over as Wilson's counsel in August for no fee, the attorney said.

In one video clip Wilson posted, an officer he claims is not Hankison says his rounds went through Taylor's window. In another, an officer can be heard stating that there was a "Black female" shot inside, along with the shooter — indicating that police might have known that Taylor had been seriously wounded before Walker exited the apartment and was arrested.

Wilson told viewers there's "plenty more where this came from." But in a rambling interview Sunday, he refused to produce more evidence. Instead, he accused LMPD officers of collusion.

By the end of his appearance, Wilson accused reporters of corruption in a profanity-laden rant and walked away.

Aguiar confirmed he hired Wilson as an investigator in June to work on the Taylor case. Wilson was retained on a contract basis, and Aguiar has paid him roughly $18,500 for his work.

Aguiar also said Wilson appears to have posted the only footage he had access to. When asked by a reporter during the interview Sunday, Wilson said he did know what a PIU, or Public Integrity Unit, file is — the investigative findings turned over to Cameron for possible charges.

VICE's report states in body camera footage reviewed by the news outlet, none of the officers present for the raid on March 13 is separated or paired with an escort, as required under LMPD policy.

The conduct of those officers is noted in an investigative report VICE obtained. And a SWAT commander, Lt. Dale Massey, later tells investigators that Hankison was "way too up in the mix" and that he requested he be separated, according to VICE.

Wilson has past run-ins with Hankison

Wilson, 35, has had multiple past encounters with Hankison, 44, dating to 2016, which Wilson outlined in his federal lawsuit filed October 2019. The suit remains pending.

In it, he calls Hankison a “dirty cop” with a “vendetta” and says he decided Wilson, “had to be engaging in illegal activity, and that he had to ensure his conviction.”

In his lawsuit, Wilson outlines three times Hankison arrested him at bars where the officers worked as off-duty security. The arrests are confirmed by court records, and all three cases were dismissed.

It also says that Wilson and Hankison have had interactions outside of the arrests, “including over a relationship with the same woman.”

He also alleges LMPD officers executed a search warrant at his home and barbershop in October 2019, kicking in the door of his home and pointing guns at his girlfriend before handcuffing her during the search.

Officers seized a legally owned gun and Wilson’s license and cell phone, according to the suit, which accused Hankison, a narcotics detective, of playing "a role in the issuance of these warrants, which were carried out by narcotics officers.”

Roberts also launched a GoFundMe for Wilson, describing it as “Kendrick’s Fight Against CORRUPTION.”

“Please support Kendrick as he fights against CORRUPTION!” it reads. “We still want justice for Kendrick and Breonna Taylor. They deserve JUSTICE!”

The fundraising goal is $1 million. As of Sunday evening, it had raised $25 from one anonymous donor.