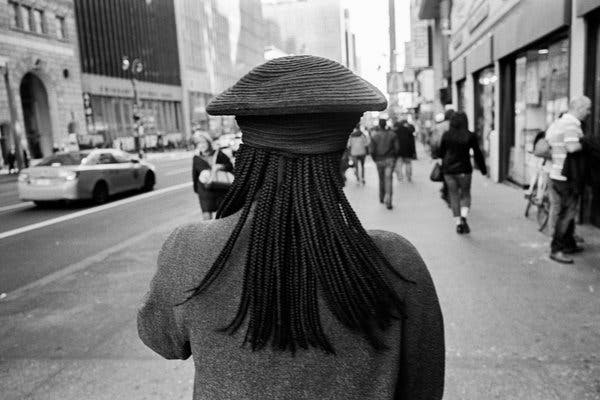 NEW YORK (AP) — New York City doesn’t want people to have their hairstyles held against them, and it has unveiled novel anti-discrimination guidelines.

They enable people to seek fines and other remedies if they’ve been harassed or punished in workplaces, schools or public spaces because of their hair texture or style.

The guidance says New Yorkers have the right to “maintain natural hair or hairstyles that are closely associated with their racial, ethnic or cultural identities.”

The protections apply to everyone but were prompted largely by what the commission calls “racist stereotypes that black hairstyles are unprofessional.”

Hair nets can still be required for health and safety reasons.

In New York, it isn’t difficult to find black women and men who can speak about how their hair has affected their lives in both subtle and substantial ways, ranging from veiled comments from co-workers to ultimatums from bosses to look “more professional” or find another job.

For Avery, 39, who works in Manhattan in court administration and declined to provide her last name for fear of reprisal at work, the answer to how often she fields remarks on her hair in a professional setting is “every day.”

Avery said her supervisor, who is white, encourages her to relax her hair, which she was wearing in shoulder-length chestnut-colored braids. “She’s like, ‘You should do your hair,’ when it is already styled, or she says, ‘straight is better,’” Avery said. She added that the only hair color her supervisor approves of is black.

Georbina DaRosa, who is interning to be a social worker, had her hair in box braids as she ate lunch with a colleague at Shake Shack on East 86th Street on a recent weekend afternoon. Ms. DaRosa said her hair sometimes elicited “microaggressions” from her superiors at work.

“Like, people say, ‘I wouldn’t be able to recognize you because you keep changing your hairstyle,’ that’s typical,” said Ms. DaRosa, 24.

Her lunch partner, Pahola Capellan, who is also black and whose ringlets were bobbed just above her shoulders, said, of her own experience: “It’s very different. There’s no discrimination because my hair is more acceptable.”

A 21-year-old black woman who gave her name only as Enie said she quit her job as a cashier at a Manhattan Wendy’s six months ago when a manager asked her to cut off her 14-inch hair extensions. “I quit because you can’t tell me my hair is too long, but the other females who are other races don’t have to cut their hair,” said Enie, who now works at a hospital.

There has long been a professional toll for those with certain hairstyles. Almost 18 percent of United States soldiers in active duty are black, but it is only in recent years that the military has dropped its prohibitions on hairstyles associated with black culture. The Marines approved braid, twist and “lock” (usually spelled loc) hairstyles in 2015, with some caveats, and the Army lifted its ban on dreadlocks in 2017.

And certain black hairstyles are freighted with history. Wearing an Afro in the 1960s, for instance, was often seen as a political statement instead of a purely aesthetic choice, said Noliwe Rooks, an author and professor at Cornell University whose work explores race and gender. Dr. Rooks said that today, black men who shave designs into their hair as a stylistic choice may be perceived as telegraphing gang membership.

“People read our bodies in ways we don’t always intend,” Dr. Rooks said. “As Zora Neale Hurston said, there is the ‘will to adorn,’ but there is often a backlash against it.”

Chaumtoli Huq, an associate professor of labor and employment law at City University of New York School of Law, said that attitudes will change as black politicians, like Stacey Abrams, who ran for governor of Georgia, and Ayanna Pressley, who represents Massachusetts in Congress, rise in prominence.

“As more high-profile black women like Abrams and Pressley opt for natural hairstyles, twists, braids, we may see a positive cultural shift that would impact how courts view these guidelines that seek to prevent discrimination based on hair,” Ms. Huq said.