In Richmond, the capital of the Confederacy, towering monuments to Confederate leaders stand in the middle of the city. One statue depicts cavalry commander Gen. J.E.B. Stuart sitting upon a muscular horse, striking a heroic pose.

About a mile away, a similar bronze sculpture has been installed; but instead of a Confederate general, it portrays a black man with dreads, wearing a hoodie and Nikes.

The statue called Rumors of War was built by Kehinde Wiley, widely known for painting the official portrait of President Barack Obama. After spending several weeks on display in Times Square, Wiley officially unveiled the three-story-tall statue Tuesday at its permanent home in front of the Virginia Museum of Fine Arts.

"It is monumental and not just a figure of speech, it is truly monumental, in terms of its ability to be a seismic shift in how we perceive and how we understand ourselves as people living here," Valerie Cassel Oliver, the museum's curator of modern and contemporary art, told NPR's Newscast Unit.

"CBS This Morning" co-host Anthony Mason spoke exclusively with the new monument's artist, Kehinde Wiley, about how he wants to create a new narrative.

A few years ago, Wiley, of California, came face-to-face for the first time with the statues of Stuart, as well as Gens. Robert E. Lee and Stonewall Jackson along Richmond's Monument Avenue. "There's a type of ceremony that surrounds the valorization of these guys," Wiley said.

Asked what he saw when he looked at the monuments, he said, "I saw a spectacle that felt dreadful. I mean, it almost felt like it was designed to be menacing."

"To be in a black body walking through the streets of Richmond and to see something that signifies the enslavement of your people, that's a little bit more heavy duty," he added.

The 42-year-old artist decided to answer with a monument of his own. On Tuesday, Wiley's 27-foot high bronze sculpture of a young black man on horseback, called "Rumors of War," was unveiled at the Virginia Museum of Fine Arts. Thousands came out for the unveiling, many standing in front of the neighboring headquarters of the United Daughters of the Confederacy.

The new statue was celebrated by Virginia Gov. Ralph Northam, who was mired in a blackface scandal earlier this year and Richmond Mayor Levar Stoney, who wants the confederate statues removed.

"Today we say welcome to a progressive and inclusive Virginia," Northam said.

Stoney said he doesn't think Confederate monuments should be on "grand boulevards like Monument Avenue."

"I think they should be found in museums and cemeteries and battlefields," he said.

Wiley, who's best known for his portrait of former President Barack Obama for the National Portrait Gallery, made his name with epic paintings of ordinary people. In one, he painted his sister in a suit of armor. 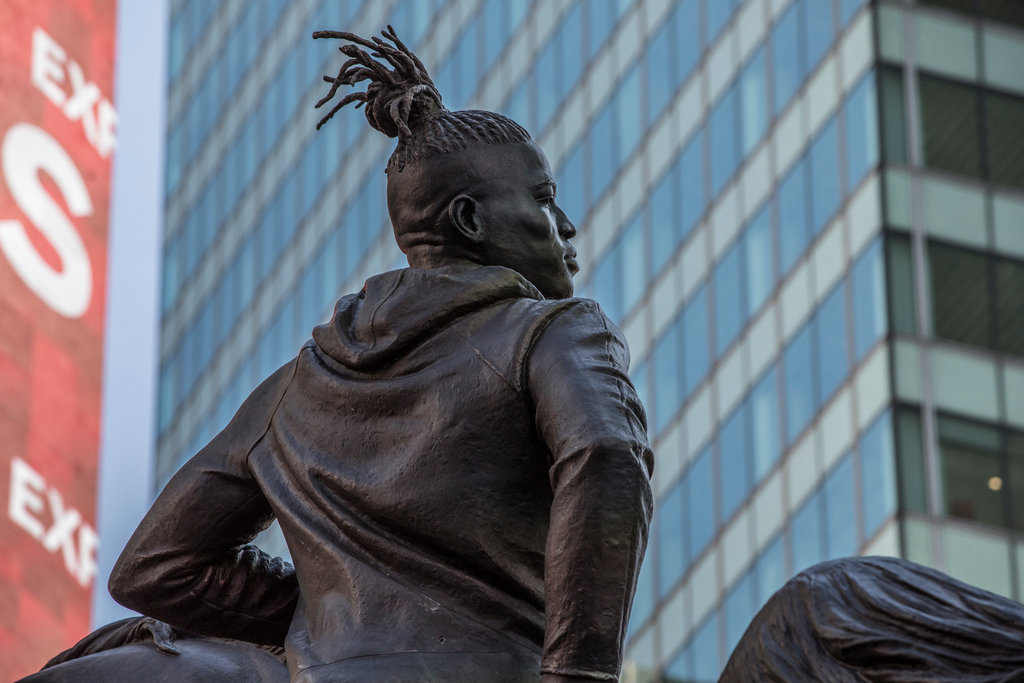 "This is part of a body of work that's about skin. … Armor is a kind of strange stand in for race in a way as well. This kind of skin that is at once so important, but a burden," he said.

He's also used horses in his earlier work. Asked what drew him to that imagery, he said, "My work is all about power. It's about the negotiation of power, the depiction of it, those who have it, those who don't."

The new sculpture made its debut this fall in New York's Times Square.

"I wanted it to be at the center of a global conversation. And when you think about America in lights, it's Times Square. It's where the world comes to see America," Wiley said.

Describing the statue, he said, "Who is this man? Well, he's anyone and no one. … I think it meant a lot to me to be able to say that in the 21st century, we as a society can say yes to a monument to a young black man in a hoodie."

Then last week it was disassembled and loaded on flatbeds for the trip to Richmond to take its permanent place near the confederate monuments.

"You want your statue to be speaking back to those statues?" Mason asked.

"I want my statue to be speaking back to the people looking at those statues," Wiley said.

"So you don't think those statues should be taken down?" Mason asked.

"I think that the best thing to do is to respond to them with more statues," he said. "Disappearance is not what I'm asking for. Nor is it keeping sculptures in city centers to horrify people. What I'm saying is, the answer to negative speech is more speech, positive speech. … It makes sense to have something exist on a monumental level, because this is a monumental conversation that this country needs to have."