New Emmett Till Memorial Will Be Made Bulletproof, Group Says

A new historical marker honoring Emmett Till will reportedly be bulletproof and protected by security, following national outrage over a photo of college students posing with guns beside a bullet-riddled memorial to the teenage lynching victim.

The Emmett Till Memorial Commission said Thursday that the new sign ― to be placed at the spot where 14-year-old Till’s body was pulled from the Tallahatchie River in northwest Mississippi in 1955 ― will in some way acknowledge the many instances of vandals defacing the site. “Unlike the first three signs, this sign calls attention to the vandalism itself,” the nonprofit group said. “We believe it is important to keep a sign at this historic site, but we don’t want to hide the legacy of racism by constantly replacing broken signs.”

Till has been an icon of the civil rights movement for over half a century. In August 1955, Till, a Chicago native, was visiting relatives in Mississippi. A white woman accused Till, who was black, of flirting and whistling at her. Her account prompted her husband and his half-brother to kidnap Till from his bed and beat and mutilate him before shooting him in the head and sinking his body in the Tallahatchie. An all-white jury acquitted the men, and the woman reportedly said decades later that she’d lied when describing her encounter with Till.

Details about the new sign’s design are still forthcoming, but the commission told NBC News that it will be 500 pounds and steel-reinforced. Visitors can also anticipate a gate and security cameras near the memorial soon, the group said. 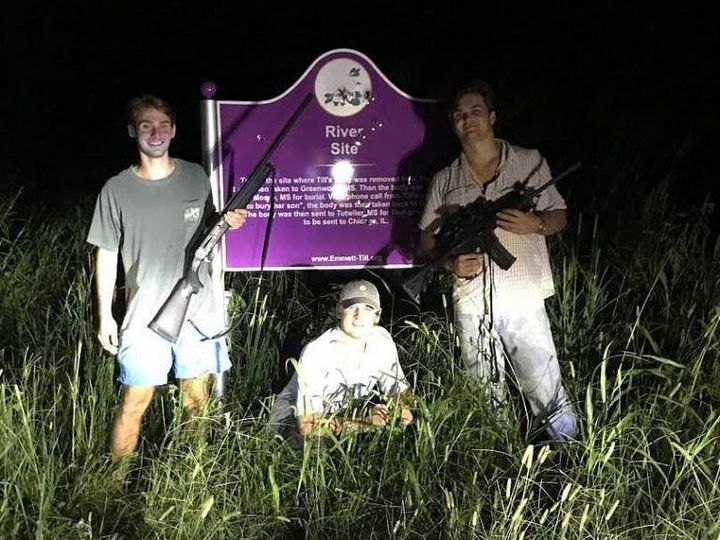 This week, the Mississippi Center for Investigative Reporting exposed a photo of three University of Mississippi students posing with guns beside a bullet-pocked sign honoring Till. According to the Center, the image appeared on the men’s social media accounts earlier this year. It’s unclear whether the men in the photo actually shot at the sign, but they’ve been suspended from their fraternity and may face a federal investigation.

Since 2007, the Emmett Till Memorial Commission has put up several signs near the site of Till’s death, but the one along the Tallahatchie River is the most secluded and has been subject to the most vandalism. “Our signs and ones like them have been stolen, thrown in the river, replaced, shot, replaced again, shot again, defaced with acid and have had KKK spray painted on them,” the group wrote this week. “The vandalism has been targeted and it has been persistent.”

Soon, such vandalism could carry a much harsher punishment. The commission is in the process of getting the historical sites about Till designated as a national park, acknowledging how his family’s response to his death triggered the first wave of the civil rights movement. Vandalism in national parks is treated as a federal crime.

“This has been our highest hope since our organization was founded,” the commission wrote of the effort to secure the national park designation. “In 1955 the federal government refused to get involved in the Till case. We believe it is now the responsibility of Congress and the President to ensure this story is told for generations to come.”