NBA players and coaches from four teams took a knee during the national anthem on Thursday night in the first set of games since the league paused its season over the coronavirus pandemic. The demonstration, inspired by free-agent NFL quarterback Colin Kaepernick, calls attention to racial injustice and police brutality.

In the first game of the season restart, between the New Orleans Pelicans and Utah Jazz, players and coaches kneeled during "The Late Show with Stephen Colbert" bandleader Jon Batiste's rendition of the national anthem. The team members also wore Black Lives Matter shirts and locked arms.

Both the Pelicans and Jazz issued statements in support of the protests. The Jazz, who won the matchup 106-104, issued a statement saying the organization stands with its players, coaches and staff as they "exercise their First Amendment rights, and use their voices, their experiences, and their platforms to peacefully express themselves." 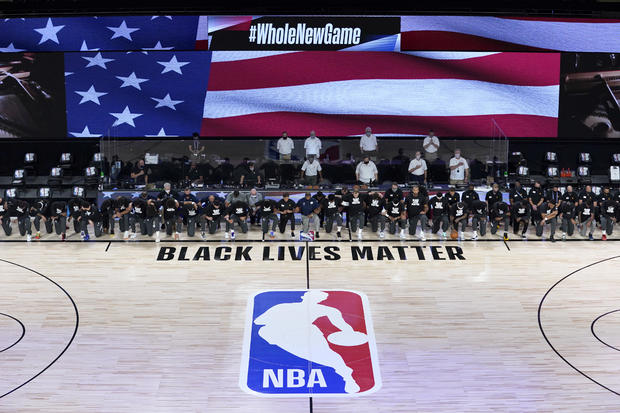 In the next game, players and coaches from the Los Angles Lakers and the Los Angeles Clippers kneeled together in solidarity as the Compton Kidz Club sang the "Star-Spangled Banner."

After the Lakers pulled away to defeat the Clippers 103-101, LeBron James spoke about the importance of the players using their platforms.

"The game of basketball has always been bigger than just the ball and 10 guys on the floor, referees. It's an opportunity to use this platform and be able to spread a lot of positive, a lot of love throughout the course of the whole world," James said in his post-game interview on TNT.

"We understand what's going on in society right now and we're using this NBA platform — as the players, as the coaches, as organizations — to continue to stand strong on that. It's great to have the NBA back and I hope our fans are proud of us tonight." 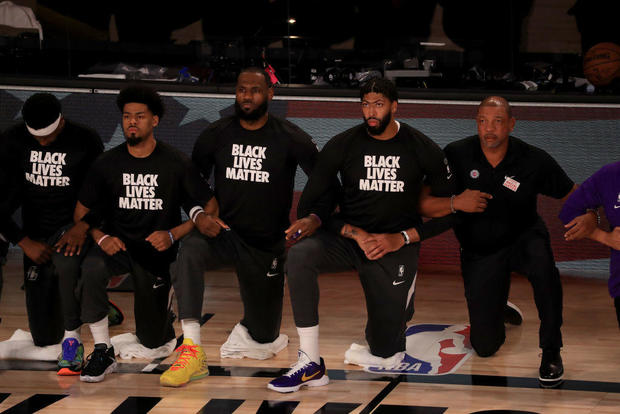 When asked how much progress the league has made, James stressed that players can't let up. "There's been progress, but in the past, when we've seen progress, we've let our foot off the gas a little bit. We can't do that."

"We deal with a lot of racism, a lot of social injustice, a lot of police brutality, not only in my neighborhood, not only with Black people, but with people of color. It's something that we want to continue to have people's ears open to."

A new CBS News poll found that most Americans view kneeling during the national anthem to protest racial discrimination as an acceptable form of protest, but there are divisions along political, racial and generational lines.

In the aftermath of George Floyd's death, many players have participated in Black Lives Matter protests and voiced the need for social change. After discussions with teams, the NBA allowed players to have pre-approved social justice messages on the backs of their jerseys.

James and other players have also kept the spotlight on Breonna Taylor, a Black emergency technician who was killed in her home by police executing a drug raid. None of the officers involved in Taylor's death have been charged.

The Pelicans, Jazz, Lakers and Clippers are among the 22 teams participating in the restart of the 2019-2020 season at the ESPN Wide World of Sports Complex at Walt Disney World Resort in Orlando. Each team will play eight seeding games over the next two weeks to determine their playoff standings.