Michelle Obama's Becoming on track to become the most popular autobiography ever, publisher says

The candid memoir, released in November, quickly became a best-seller and is one of the most popular books of the decade.

"We believe this could be the most successful memoir in history," said Thomas Rabe, the chief executive of Bertelsmann, a parent company of Penguin Random House, according to the Wall Street Journal.

The firm paid $60m in 2017 for the rights to the book alongside that of former US President Barack Obama. Mr Obama's book is yet to be published. Bertelsmann owns a 75% stake in Obama publisher Penguin Random House.

Obama has sold out arenas on her massive international book tour, where she has been interviewed onstage by Oprah Winfrey, Sarah Jessica Parker, Reese Witherspoon and former Obama senior adviser Valerie Jarrett, among others. 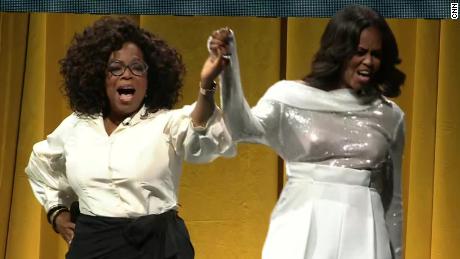 The book had the longest streak at No. 1 for any book since "Fifty Shades of Grey" came out in 2012, according to Amazon.