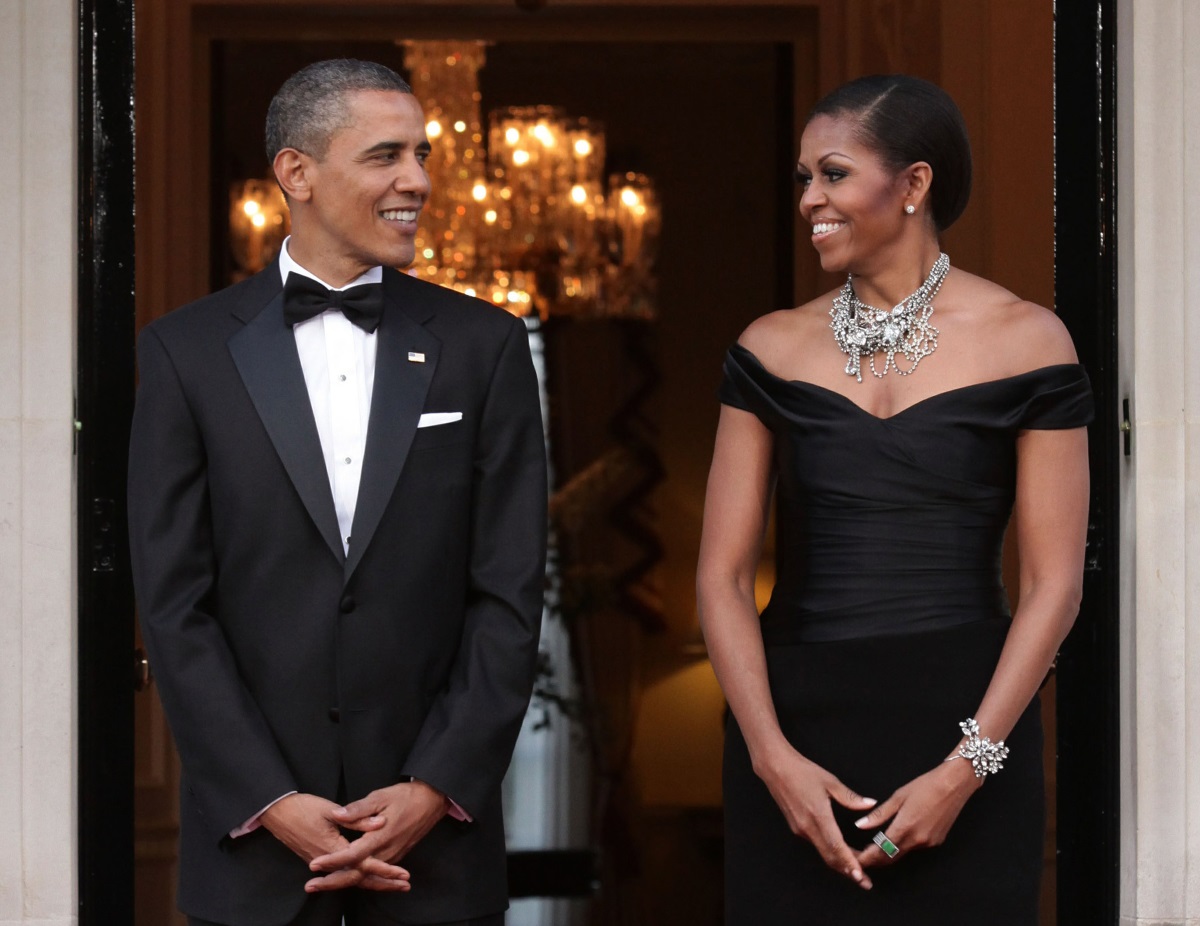 Michelle Obama has been away from the White House for more than three years, a period long enough to write a memoir and release an accompanying documentary film.

"Becoming," which begins streaming Wednesday on Netflix, is a companion film to Obama's bestselling 2018 memoir of the same name. It is in part a self-examination project for the former first lady, composed of scenes clipped from her book tour, detailing interactions and conversations with fans and friends, both onstage and off.

"The whole idea of doing the tour is about being able to have the time to actually reflect, to figure out 'what just happened to me?' " says Obama to Oprah Winfrey during one of her onstage book tour interviews, parts of which are in the documentary. "It's the panic moment of, 'this is totally me, unplugged, for the first time in a long time.' "

Obama may feel anxiety at such a deep truth-telling exercise as baring her soul in front of the tens of thousands of people who paid for tickets to her global book tour. But for many Americans, Obama remains in their minds the most accessible first lady of modern United States history. 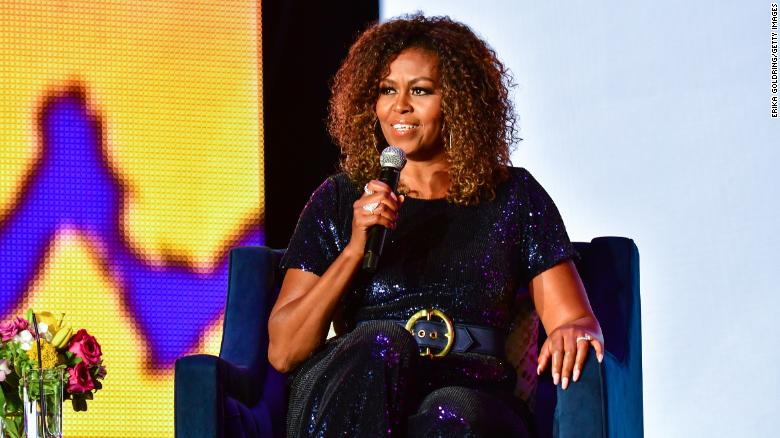 During her tenure, she opted for a public presence not shrouded in secrecy and formality, but rather at least the perception of normalcy and realness. Supporters found Obama to be a reflection of modern motherhood and independence; detractors felt she was making too familiar the role of presidential spouse, leaving by the wayside conventional expectations.

Obama chose to spend her eight years as a first lady as capable of giving a powerful speech on a policy issue as she was doing pushups on a talk show, or making up a rap song about eating vegetables.

In "Becoming," which was directed by Nadia Hallgren, Obama speaks openly about that delicate balance of maintaining her sense of self, along with the immeasurable scrutiny every first lady finds herself facing once she becomes the most recognized woman in the world.

"Every gesture you make, every blink of an eye is analyzed," says Obama in the film. "You have the world watching every move you make. Your life isn't yours anymore."

She reveals to Winfrey that she held back tears as she walked away from the United States Capitol building to Marine One after President Donald Trump's inauguration, "because they're going to say I'm crying for a different reason," but as soon as she was safely aboard Air Force One, on the ceremonial last flight out of Washington, she let go, and sobbed.

"(It was) the release of trying to do everything perfectly," she says. 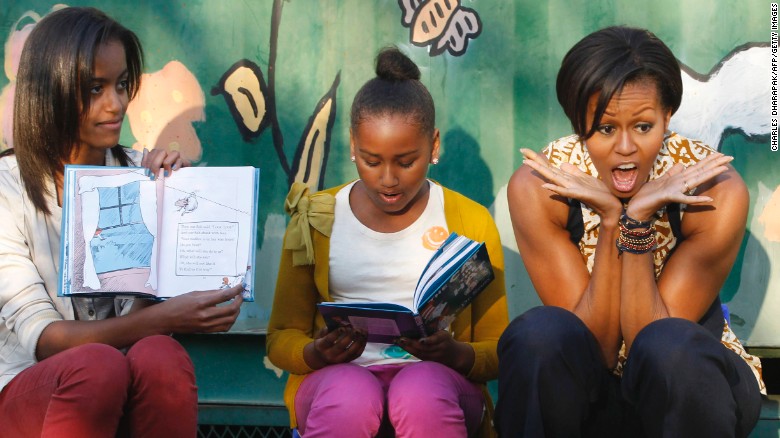 Obama's predominant concern in the White House was her two young daughters, Malia, now 21, and Sasha, now 18. She is more candid in the film about raising them there, offering insight on the struggles she had keeping them grounded while living in an enormous mansion with servants and privilege. She says she insisted they clean their own rooms and do their own laundry, for example.

Obama also shares she let the girls have a last sleepover with friends on their final night in the White House, but had to rouse them in the morning by saying: "Wake up, the Trumps are coming!"

In one scene from the documentary, a camera is backstage at a book tour stop to capture Malia visiting her mother, and reflecting on the massive crowd awaiting Obama. Malia tells her mom "those eight years weren't for nothing," realizing the broader impact of Obama's tenure. Malia and Sasha also make a rare appearance together in "Becoming," taking part in a brief interview, as does Obama's mother, Marian Robinson, and her brother, Craig Robinson.

How Obama dealt with the pressures of being first lady is more understandable watching and hearing she and her family talk about some of the challenges she encountered most of her life, not just in the White House. She wrote about many of them in the memoir "Becoming," and she recounts them in the film. Obama tells a story about her a particularly discouraging high school guidance counselor. 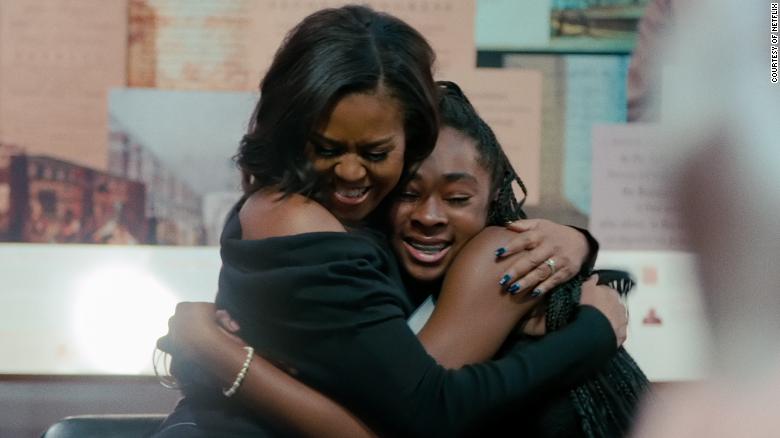 "She decided I was reaching too high," says Obama, who named her initiative to help young people continue education past high school Reach Higher. She also recounts being one of few minority students at Princeton University, where she studied as an undergrad.

"One of my roommates moved out because her mother was horrified I was black," she says. "She felt her daughter was in danger."

Race and being a woman and struggling to be heard and seen are recurring themes in the film, and are paramount to Obama's discussions with groups of young women, many African American, with whom she meets at events associated with the book tour.

"I hope my story urges you to see the power of your story, and to own that," says Obama to a young woman named Shayla.

"We can't afford to wait for the world to be equal to start feeling seen," she says in a clip. "I feel like I gotta share with you all that the energy that's out there is much better than what we see."

Another teenage girl asks Obama how she's getting her life "back on track" now, after her first lady detour, to which Obama replies, "It's a whole new track. It's not going back, it's all different." 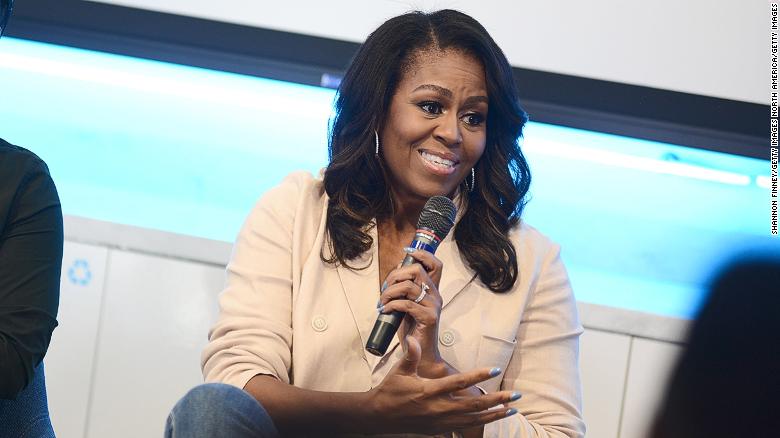 Since departing the White House, Obama has physically not moved far, just a few miles away to a comfortable house in Washington, DC.; her objectives haven't strayed either.

She is still championing young women and girls, in 2018 launching the Global Girls Alliance to support education. Of late, she has also been active with her other initiative, When We All Vote, encouraging eligible voters to do so digitally.

Since the onset of coronavirus stay-at-home guidelines, Obama has also been active in messaging the country, from recording a robocall for Washington's vulnerable residents to outline the availability of free testing, to launching a reading program with PBS Kids called "Mondays with Michelle."

Last month, she joined with Laura Bush to record a video message thanking heath care and front line workers as part of the two-hour Global Citizen television event. On Tuesday, she announced on social media that she would be part of a massive virtual commencement celebration, via YouTube, offering her guidance for graduates in an address for students unable to participate in person.

While her schedule is busy these days, with voting and Covid-19 prerogatives, and soon, presumably, helping campaign for presumptive Democratic presidential nominee Joe Biden, Obama reveals in "Becoming" that she's also "figuring out what I want to do, what do I care about?"

She displays a vulnerability and uncertainty that she couldn't always show when she was in the White House. 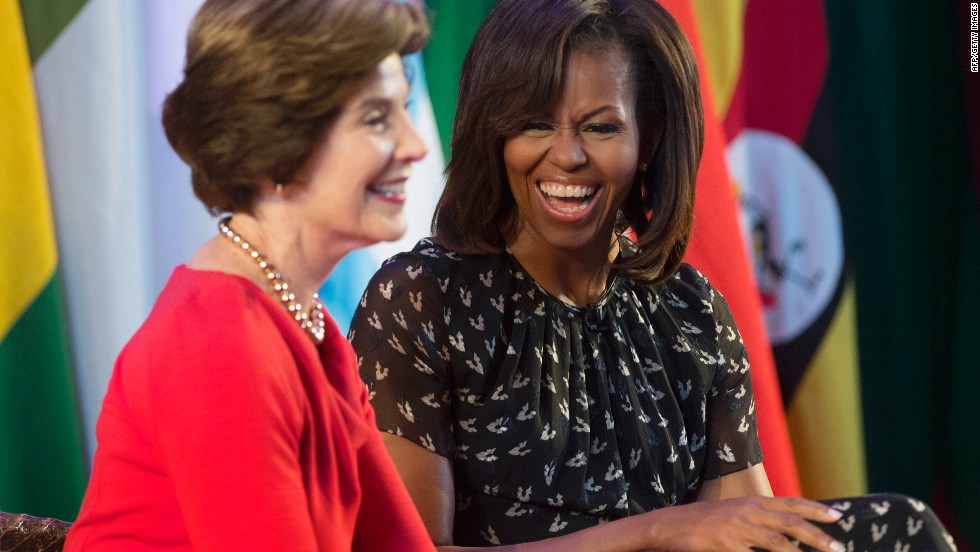 Many of Obama's predecessors likewise found exiting the White House liberating. Being able to talk about what events were actually like versus what the public saw is an exercise that every first lady dating back decades has revealed in a personal memoir, most of which have been incredibly popular.

Helen "Nellie" Taft was among the first first ladies to write a detailed autobiography, "Recollections of Full Years," and see it published while she was still alive, in 1914.

In his book, "Author in Chief," Craig Fehrman writes Ford's memoir, "Times of My Life," was more anticipated than her husband, Gerald Ford's, autobiography. The couple, like the Obamas, signed a joint publishing deal and Fehrman says that Betty Ford in 1977, the year before her book was released, gave Gerald Ford a T-shirt for his birthday that read, "I bet my book outsells yours."

Clinton has written three memoirs, but her first, 2003's "Living History," about her years as first lady, was a massive bestseller, breaking records for first-day sales at bookseller Barnes & Noble.

The curiosity factor of a first lady is generally high, and traditionally, the memoirs offer revealing insight into women who are typically stereotyped as secondary characters in a presidential administration, no matter how accomplished, independent or established they were prior to their White House years.

Yet no first lady memoir, or any memoir of a public figure for that matter, has done as well from a sales perspective as Obama's "Becoming," which according to publisher Penguin Random House sold more than 10 million copies less than five months after its release. Seven hundred thousand copies were sold on the first day, 1.4 million in the first week, making "Becoming" the fastest selling book of 2018; experts say it will be a tough record to beat, even for her husband, Barack Obama, who has yet to release a memoir of his presidential years.

So while the announcement that Netflix was releasing a "Becoming" documentary came as a surprise last month, the notion that such a film existed was less shocking.

Obama needs little in the way of build up, or rousing an audience. There is, as she says in the movie, a lot more she would like to share.

"So little of who I am happened in those eight years, so much more of who I was happened before," she says.