Melania Trump Wants One Thing For her Birthday and It's Green 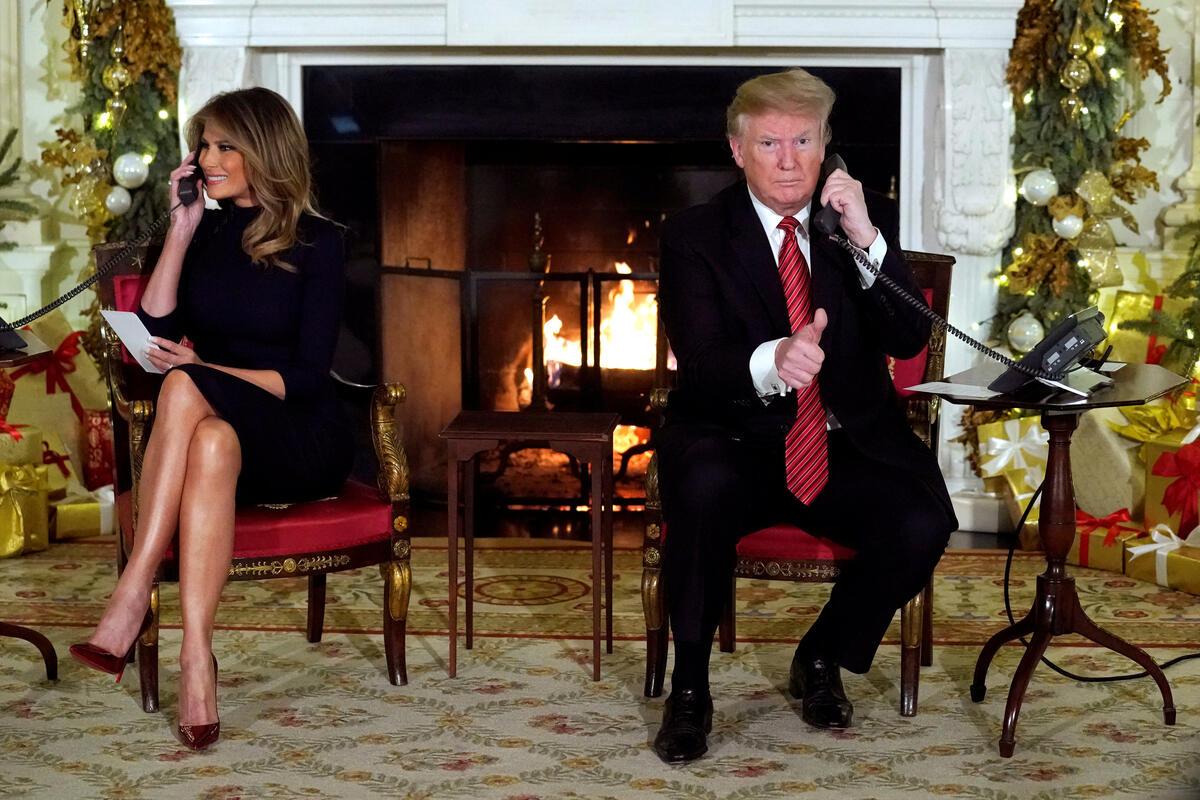 If you're an avid Trump supporter, your love for first lady Melania Trump rivals your devotion for her husband Donald J. Trump, and in some cases, the former probably exceeds the latter. If you are all in for Team Trump, you already know that the First Lady's birthday is on April the 26th, and the think tanks over at Trump financing department have expertly devised a way to capitalize on such enthusiasm. But before we dive into the monetary aspect of Melania’s birthday, let's revisit the Trumps' strange but true romance.

When Melania and Donald Trump first met, she didn’t immediately give in to his requests. Rather, she posed a bit of a challenge. Inside Edition reports Trump attempted to start a relationship with Melania while he was on a date with another woman. Melania told GQ she knew Trump didn’t come to the party they were both attending alone, so she refused when he asked for her phone number. Instead, Melania took his number. Donald was so determined to get a date that he gave the beauty all his phone numbers, which included numbers to his office, his Mar-a-Lago property, and his New York home.

Melania’s heart slowly started to warm up toward Donald. A couple of days later, she decided to call him. However, they didn’t make a love connection immediately. It is reported Melania waited an entire week before picking up the phone and making the first call. “I’m not starstruck. We had a great connection, we had great chemistry, but I was not starstruck. And maybe he noticed that,” she told GQ.

Melania was also drawn to the fact that Donald is very similar to her father. Trump and Melania’s father, Viktor Knavs, are alike in many ways. For starters, Trump is just five years younger than Melania’s father. In addition, friends and former classmates have said the two men have similar personalities. Melania’s friends told The New York Times that Knavs is “larger-than-life,” and he reminds them of Donald Trump. So, it appears that Donald reminds Melania of family. We guess there’s just no place like home.

The Trumps have been married for 15 years now, and they have what some would call a quite “exceptional” relationship, as Donald, who has a certain affinity for extremely beautiful women, never misses an opportunity to take loving digs at his wife that are borderline cringeworthy. 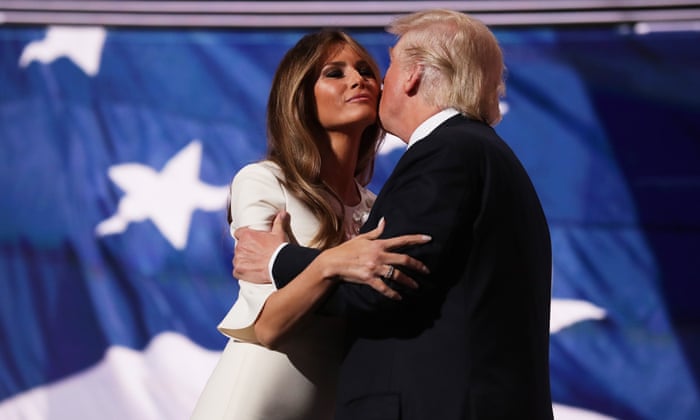 At a private fundraising event for top Republican donors, Donald begins to thank all the republicans who stuck by his side, like Steve Scalise  who had been shot by a crazed gunman the previous year. He anecdoted how Scalise’s wife was so worried about the welfare of her husband and how she thanked him for stopping at the hospital to check on the Louisiana Republican’s health. But then he came out with this gem of a line: “[Scalise’s wife’] cried her eyes out when I met her at the hospital that fateful day … I mean not many wives would react that way to tragedy, I know mine wouldn’t.”

Maybe he is saying Melania Trump hates him so much she wouldn’t even cry at his funeral. Maybe he’s saying that after all the strain that their marriage has gone through, she has no more tears left to give? Maybe he was genuinely being funny. Who knows?

And as far as the First Lady is concerned, she doesn’t seem to enjoy Donald's company nowadays. On many occasions, she repeatedly appears to refuse to hold her husband’s hand in public.

Below, she goes with the tactic of appeasing him with a one second hand hold, before letting go.

Other times she has swatted him away, like on this state trip to Tel Aviv.

When asked in an interview if she loved her husband, her answer was a rehearsed, politically correct one, meant to quell rumors of infidelity and unhappiness in the marriage. Notice that the words, “I love Donald”, never come out her mouth, but the insistence that all is well in Camelot..

“I'm a mother and a first lady, and I have much more important things to think about and to do," she tells @ABC. https://t.co/VILtmVBA2E pic.twitter.com/MSLsRksVu8

We also can't forget the many looks Melania has given the Commander in Chief these past three years, that range from venomous to silent cries for help. When Trump got his big moment on the Jumbotron at the World Series, the timing couldn’t have been worse. Hearing the crowd chant “lock him up!”, he went from an ear-to-ear grin to a scowl.

His better half, strangely, went from cat-like-grin, to serious face, back to cat-like grin in a matter of seconds. Like someone trying to put on a very serious face whilst trying not to burst out laughing.

I am sure all wives have done that to their husbands at various points in their marriage.

So with the First Lady's birthday quickly approaching, Mr trump wants to give her a special gift this year. And the token of his affection is, strangely enough, a birthday card. Not your typical birthday card, but one with the signatures of 150 of her most devoted fans who want to help celebrate her most festive of days. My guess is that being married for over a decade to a millionaire, now president of the united states, you probably have been given anything and everything under the sun on your birthday, anniversaries and including major holidays. With his back against the wall, and time quickly running out, there is only one last option for a diligent Donald Trump. He has to break out the hallmark card and hope for the best... Because sleeping on the couch, at his age, is not an option. Here you go patriots for Trump, your commander in chief needs your help. You have just received the chance in a lifetime to not only sign his card but to send Melania a message of your choice. You can wish her the bestest of birthdays or you can tell her how much she is the classiest first lady to ever grace the white house, like one one conservative commentator dared to name her.

The marching orders to sign her birthday card came through phone messaging to his millions of supporters who have been receiving text alerts for two weeks now. Once you follow the link in the text message, you are immediately directed to the official Donald Trump website where you are asked for your name, email address  and even zip code.

There is also a special slot for a personalized message for the First Lady. At this point, you believe your message is as good as sent and ready to be read by Melania, until you hit the submit button and you are redirected to another page where a donation to Donald Trump's America first Agenda is required. I am not quite sure why a donation is needed to wish somebody a happy birthday, but it ids safe to say that tone’s well wishes do not make it to Melania until said contribution is made.

Thankfully, in these hard times, which began roughly a month ago, you can pick from a minimum of 40 dollars to a maximum of 2.800 dollars. But if you are really struggling, you can pick the "0ther" option and type in a small two digit number, lower than 40, that better reflect your current situation. Some of us are feeling the pinch of the corona virus, stay at home quarantine, more than others. And I also find it interesting that it took two whole weeks for the president to find 150 supporters, out of all of those hundreds of thousands, who would be willing to pay to leave Melania a message. Either people hate the First Lady or maybe somebody is peddling the false idea that only a selected few would have the honor to correspond with her.

The truth of the matter, this is just another ploy from the Donald Trump campaign to squeeze as much money as possible from his poor supporters in order to finance his reelection effort.

Some of their most shameful ploys to raise money vary from promised face to face meetings with the president to acquiring (supposedly) exclusive merchandise, like those infamous MAGA hats, signed personally by Mister Trump. 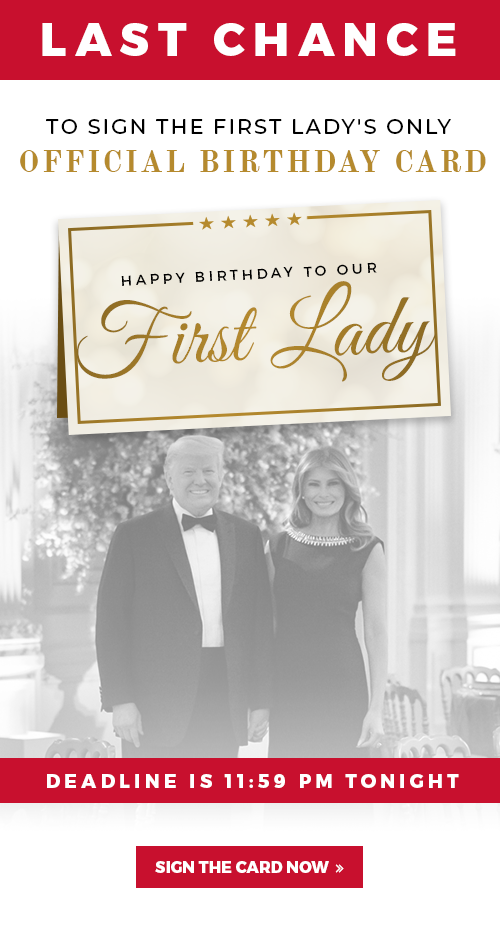 Selling merchandise to fill ones coffers is not illegal, but the guise used to raise those funds is truly despicable. Adding the words "limited", "exclusive" and "one time only" are triggers in his supporters’ brains, coercing them to grab that Trump merch before it’s too late, and at all costs.

I hate to break it to you, that signed card for Melania is just another money grab. With that being said, some may be completely aware that they are being duped because they believe that they are supporting a greater cause and still choose to donate under the guise of getting or doing something truly special. That’s completely fine, and I would never dare try to talk you out of it if you can afford it. But my advice for those who really feed the need to express their love for the First Lady, do yourselves a favor, go to her twitter page, and leave her a message there. She will eventually see it. You will still feel good after doing it, and you may end up saving yourself some money for you next grocery store run. Eventually you will need to get the essentials, like toilet paper. Nowadays that’s far more rewarding than a Hallmark card.