British Vogue Editor-in-Chief Edward Enninful revealed last week that Meghan’s issue set two major records for the publication: It became the fastest selling issue in the history of the magazine and also the “biggest-selling issue of the past decade.”

A surprise moment with the Duchess - for an intimate, behind-the-scenes look at the making of the September 2019 #ForcesForChange issue, guest edited by the #DuchessOfSussex, head to @BritishVogue’s YouTube channel. Directed and edited by @Kloss_Films

“I’m thrilled to report that newsstand sales of @BritishVogue are up in the second half of 2019, but the real highlight for me is the performance of our September 2019 issue,” Enninful wrote in an Instagram post on Thursday.

″#ForcesForChange, guest edited by The Duchess of Sussex @SussexRoyal, was our fastest-selling issue in the history of #BritishVogue ( sold out in 10 days) and the biggest-selling issue of the past decade,” he added.

In honor of the issue’s success, Enninful posted an exclusive behind-the-scenes video of Meghan at his home, talking about the poignant issue and the women featured in it. The video was also shared on the SussexRoyal Instagram account.

In the video, the two talk about how their collaboration came to be and why it was important that anyone who read the magazine issue “should be able to see themself in it,” the duchess said. For that very reason, the cover included a blank space ―  meant to represent a mirror ― next to the 15 women featured on the front.

During the 2½-minute clip, Meghan breaks out celebratory party hats for her and Enninful, whom she calls “E,” before they call some of the women featured on the cover. Many of them were surprised to hear the duchess on the phone and thanked her for her work.

“Meghan, I’m so proud of you for using your amazing platform and your strong voice, and I’m so honored to be a part of it with all those other amazing women,” Jane Fonda can be heard saying over the phone. “Thank you so much for including me.” 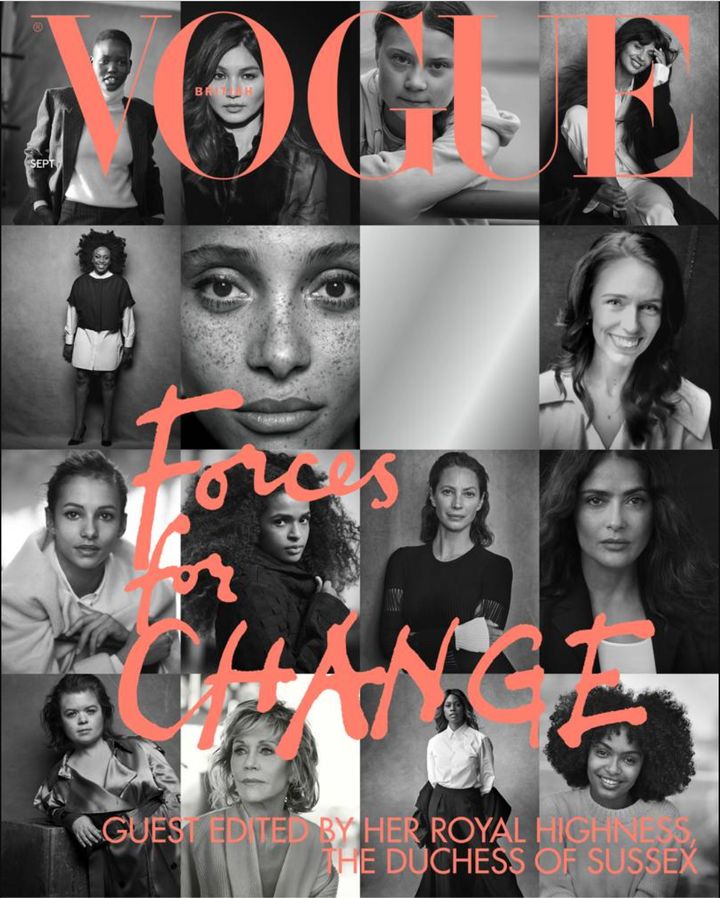 When the news of Meghan’s role as guest editor broke, the duchess said in a statement on her SussexRoyal Instagram page that it was “rewarding, educational and inspiring” to work on the issue.

“To deep dive into this process, working quietly behind the scenes for so many months, I am happy to now be able to share what we have created,” Meghan said at the time. “A huge thanks to all of the friends who supported me in this endeavour, lending their time and energy to help within these pages and on the cover.”