In a bombshell that sent shock waves throughout the Lakersorganization and the NBA as a whole, a teary-eyed Magic Johnson announced Tuesday night that he is stepping down after just two years as the team's president of basketball operations.

"It's a difficult decision. I cried before I came here," Johnson said as he choked back tears while making the announcement before the Lakers' regular-season finale against the Portland Trail Blazers, a 104-101 loss. "I am about to cry now. It's hard when you love an organization the way I love this organization. It's hard when you love a person like I love Jeanie [Buss]. I don't want to disappoint her."

But Johnson also made it clear that the decision leaves him in a happier state.

Johnson said the decision had nothing to do with Luke Walton's future as the team's head coach. He admitted, however, that he wanted to avoid Walton's job coming between him and Buss, the Lakers' controlling owner and governor who has been a staunch supporter of the coach.

"We love Luke [Walton], so I got to make a decision and that's a tough thing," Johnson said. "I'm good with where I am. I'm happy. I want to do the things I used to do, so I had to weigh both situations, so this is better for me."

Johnson said he had not informed Buss or general manager Rob Pelinka of his decision before talking to reporters. He later told ESPN's Rachel Nichols that he didn't tell Buss first because he was afraid she would have talked him out of it.

The Lakers thanked Johnson in a statement, saying in part, "There is no greater Los Angeles Laker than Earvin Johnson. ... He will always be not only a Lakers icon, but our family." Buss echoed those sentiments in a tweet, writing: "Earvin, I loved working side by side with you. You've brought us a long way. We will continue the journey. We love you."

The Lakers franchise is currently "paralyzed" by the news, a team source told ESPN.

The Lakers finished the season 37-45 and went 35-47 last season, putting the job security of Walton, the third-year coach, in jeopardy. The team has not made the playoffs since 2013.

Walton has two years remaining on his contract, but only next season is guaranteed, a source told ESPN's Adrian Wojnarowski.

"But you know ... it was going to be tough for her, because she loves him, loves me," Johnson said of the dynamic with Buss, Walton and himself. "And I was already saying, you know what? Really, Earvin, are you really happy? So when I decided I wasn't, I didn't want to put her in a position like this. And so this was the right move to make. And I've never been so relieved."

Walton gave his pregame remarks before Johnson surprised reporters by taking the coach's place behind the dais set up in the hallway across from the Lakers' locker room at Staples Center. When asked how the season went, Walton said it was "wild."

I don’t know what the HELL just happened with MAGIC JOHNSON!!!!!! pic.twitter.com/Ra9yRDpDYw

After Tuesday's loss, he declined to say much about Johnson's announcement.

"I found out when you guys did," he said. "It was 80 minutes before the game ... and I haven't had any time to really process it."

Johnson acknowledged the rough start to the Lakers' season. He admonished Walton in a tense meeting after the team opened 2-5, but he said everything has been "fine" between the two since.

"Sometimes as a president you have to have a tough meeting with the coach," Johnson said. "After that, it was fine. And it's been fine. I haven't had any problems with Luke. People think we had problems, but we haven't had any problems. ... If I had come back, we all had to be better. I made mistakes myself. But also, everybody had to be better, and that is what it is all about."

Johnson, who was named to the position in February 2017, said he made his decision Tuesday morning, a day after he and Buss had a three-hour meeting. He said the reason why he had not told Buss about his decision before his announcement was because he could not face her. Johnson waited for Buss after his announcement but then left the arena after he was told she wasn't coming to the game.

League sources told Wojnarowski that Johnson and Pelinka visited with Lakers star LeBron James and his agent, Rich Paul, on Saturday. Johnson offered no indication that he was on the brink of leaving the team, sources said. Johnson said he did not tell James about his decision to leave before making his announcement, either.

Lakers point guard Rajon Rondo said the Johnson news took the organization and the locker room by complete surprise. He said he arrived at the arena and saw a media horde surrounding Johnson but initially didn't know what was happening.

"Nobody had an idea," said Rondo, who did not play in the season finale against Portland. "I didn't know if it was true or not. What shocked me is how everybody else is shocked. Because nobody knew.

"I walked in ... and thought LeBron had retired or something."

In discussing his decision Tuesday night, Johnson said he did not like "the backstabbing" and "the whispering" that was going on. He did not clarify what he meant, other than to say it is something that happens in the NBA and that he wasn't talking strictly about the Lakers organization.

"I don't like a lot of things that went on that didn't have to go on," Johnson said. "So I hope that, after tomorrow, the Lakers can head in the right direction, which we are. Injuries really hurt us."

Asked if he would like to see Pelinka and Walton retain their jobs, Johnson declined to answer, saying that will be up to Buss. He noted that he and Pelinka "worked well" together.

"Do I think Rob is the right GM? That's a decision Jeanie has to make," Johnson said. "I worked well with him. I had no problem with him.

"Jeanie has to make all the calls. That's not the calls for me to make. This is her organization."

In a podcast appearance last week, Buss said a story that came out this season about her team -- she wouldn't specify which one -- caused her to question her connection to some of the people she worked with. She requested one-on-one meetings with several colleagues to meet face to face and gauge her belief in them. Johnson said Buss was not referring to him.

"Her and I? No. No. She trusted me," he said. "She already knows I'm the most loyal person she got. She's loyal to me, I'm loyal to her. Trust, we had that down. Even before I got here [as president]. Because I would always tell her the truth about the organization. I think that was about some other people, but you would have to ask her. But she gave me what I needed. When I first got here some people wasn't up to excellence, so I had to fire some people and she was OK with that." 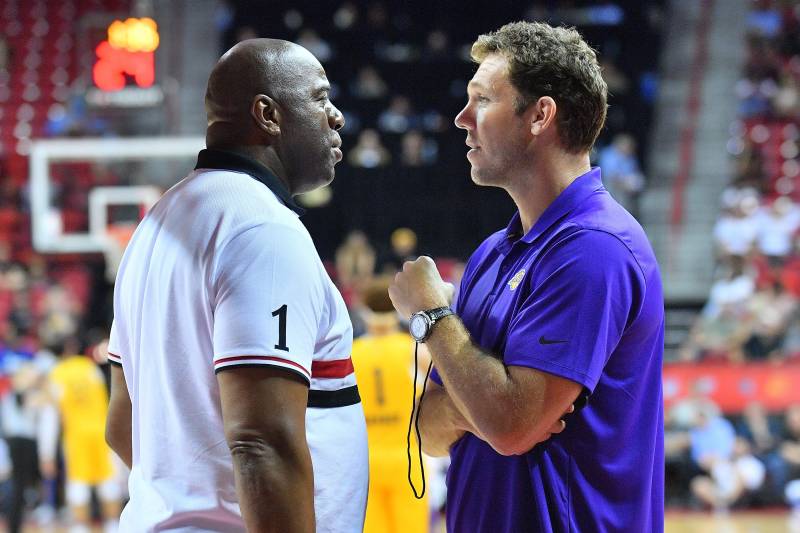 Johnson lamented that his position with the Lakers didn't allow him to be a statesman of the game of basketball, because any comment he made about another player on another team could lead to tampering. Johnson and the Lakers have been fined a total of $550,000 for tampering over Paul George and Giannis Antetokounmpo in the past.

Earlier this season, the NBA looked into whether the Lakers tampered when Johnson revealed that Philadelphia's Ben Simmons asked the Lakers if he could work out with Johnson in the offseason to improve his game. The NBA ultimately ruled there was no tampering.

Johnson also said that he wanted to remain active in the community and his businesses.

"I was happier when I wasn't president [of the Lakers]," Johnson said.

"We [the Lakers] are halfway there with LeBron coming. Think this summer, with that other star coming in, whoever is going to bring him in, I think this team is really going to be in position to contend for a championship with the growth of the young players."

Johnson spoke to reporters for nearly an hour and a half, causing the Lakers to cancel a scheduled pregame media session with James for what would have been his final remarks of the season.

"I'm a free bird and I've been handcuffed," Johnson said. "And I don't like that. ... This is the right time. The right move. The right decision. I'm so happy. I'm a guy who always knows when things are right, and this is right. It feels good."