Steve Bannon, Kris Kobach and Erik Prince are among the backers of an improbable effort to start building a border wall without federal funding. 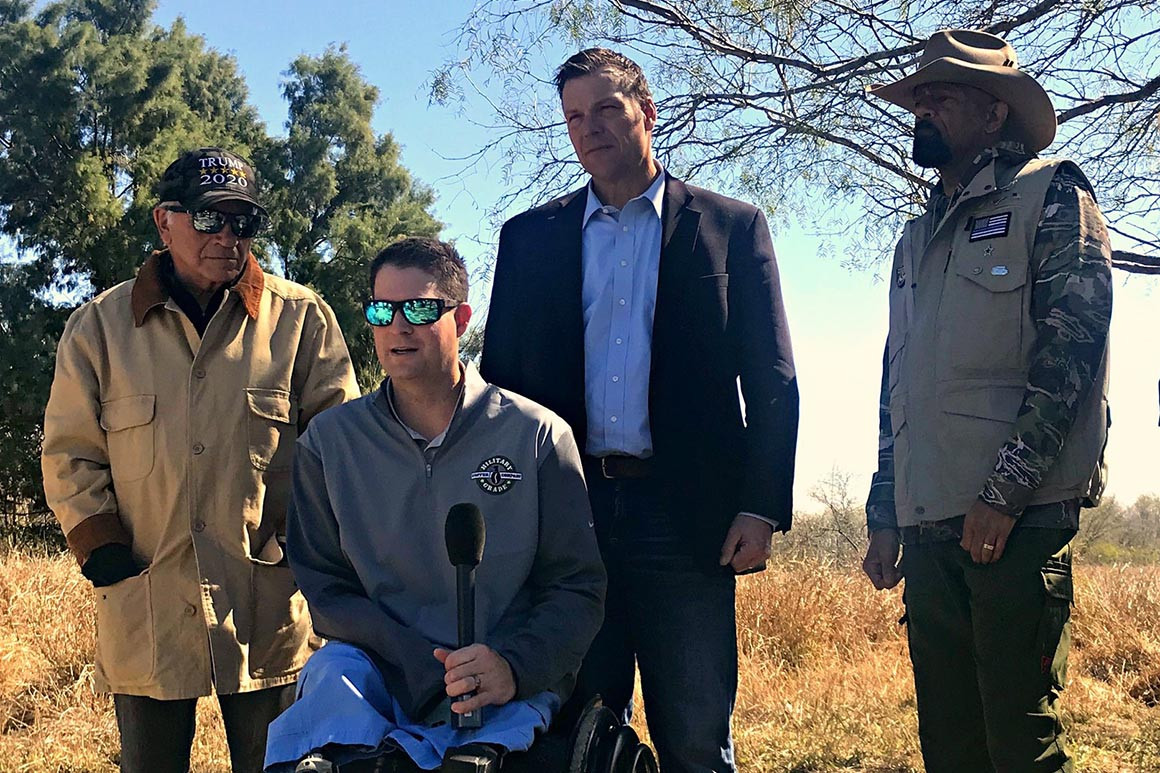 It could have been an outtake from a hard-right reboot of “Ocean’s 11” for the Trump era: a gathering of some of President Donald Trump’s most notorious and outspoken supporters, who descended last week on the southern border town of McAllen, Texas.

With Congress refusing to pony up the $5.7 billion Trump has demanded for the project, his allies are now plotting to kick off construction with private money and private land.

The idea, which began in December as a Florida man’s quixotic crowdfunding campaign, is becoming something more, well, concrete. Big-name Trump supporters like Bannon, a former Trump campaign and White House strategist, have flocked to the project. And they have initiated talks with the Israeli firm that constructed that country’s fence on its border with the Gaza Strip, they told POLITICO. They expect to hold a town hall in Tucson, Ariz., as soon as Friday and visit the border in Laredo, Texas, next week.

The details come as Trump, who reportedly blessed the project in a conversationlast month with Kobach, one of the country’s most prominent advocates of restrictionist immigration policies, is expected to renew his demand for a border wall in his State of the Union address Tuesday night.

Organizers insist they are serious about developing a large-scale infrastructure project, one that could supplement — and trim the cost of — Trump’s proposed federal wall. Whether they can achieve anything close to that remains an open question.

“Look, it’s evolving,” Bannon, whose involvement in the project has not previously been reported, said.

“Do we have a billion dollars right now? No. But can we raise one- or two-hundred million dollars? No doubt about it," added Bannon, whose compatriots have formed a nonprofit group, We Build the Wall, that grew out of the original crowd-funding campaign.

Still, the endeavor has the air of political theater.

Bannon told POLITICO that his team is studying whether its wall could be constructed from the hemp-based building material hempcrete. “Do you understand the irony of using hempcrete to keep out marijuana?" Bannon said. The group has entered intoa partnership with the Kansas-based America’s Hemp Academy to supply the material if it is selected, according to organizers.

"What these individuals are doing is a great political stunt, but it's not going to make the country safer," said Ali Noorani, executive director of the National Immigration Forum, a Washington-based pro-immigration advocacy group. Noorani argued that border security resources would be better deployed at ports of entry.

But even Noorani conceded that the private wall scheme had one advantage over Trump’s border wall proposal: It requires the consent of private landowners, rather than government seizure of their land through eminent domain.

Leon Fresco, a former deputy assistant attorney general for the Justice Department’s Office of Immigration Litigation, said he was skeptical the effort could make a meaningful dent in migration patterns. He noted that a single mile of border wall could cost millions.

“Twenty-million dollars to $30 million is not going to get you very far," he said. Private wall-building efforts could run into problems with the Environmental Protection Agency and the Interior Department, said Fresco, a partner at the Washington office of law firm Holland & Knight.

“They have the right to be skeptics,” said Brian Kolfage, a triple amputee Iraq War veteran who started the GoFundMe campaign in December. “It's something that's never been done, and it’s a very big project, but we're going to give it our all."

About two-thirds of the 2,000-mile border is owned privately or by states, according to a 2015 Government Accountability and Oversight report, which did not offer a more detailed breakdown. Bannon said the group has identified roughly 250-400 miles of privately owned land that the project would target.

After consulting with experts, including a representative of the Israeli fencing firm Magal Security Systems, the group believes it can build a mile of wall for $1.5 million to $2.5 million, excluding the cost of land, Kolfage said.

Organizers said they plan to use traditional political fundraising methods, like mail and email campaigns, to get from the $20 million raised so far to the projected multibillion-dollar cost of constructing hundreds of miles of wall.

The group plans to promote the wall plan at the annual Conservative Political Action Conference, which begins at the end of February. It is considering following that with a bus tour and town halls, Kolfage said. From there, actual construction could be only weeks away. "We should be turning dirt on this thing by May 1, June 1 at the latest, according to our experts," he said.

Kolfage said he expects the beginning of construction to spur more fundraising, especially if the group can demonstrate competence to potential megadonors. “Once we break ground, it's going to open up a whole new can of worms," he said.

Kobach suggested $100 million could be raised for over 30 miles of wall in the project’s first year.

"Oftentimes, people will just wait for the government to do it,” Kobach said. “In this case, the need is so urgent that they say they want to do it right now." The White House did not respond to a request for comment about Kobach’s account of his conversation with Trump about the project.

But that approach quickly came to look like a dead end. Even if citizens donated funds to the Treasury, Congress would still need to approve their use for a wall. So Kolfage and company switched tacks, forming We Build the Wall to fund a private construction effort on private lands.

Behind the scenes, Bannon has lent the project his connections and star power. Bannon got to know Kolfage after Facebook shut down pages the veteran maintained there last year, and Kolfage turned to Bannon for help. Kolfage said he began flying to Washington for meetings about the wall project facilitated by Bannon in late December.

While Bannon’s involvement had been secret, Prince, Kobach, Clarke, Tancredo and Schilling all serve on the nonprofit’s board. Each of them brings colorful credentials to the mix: Prince, the brother of Trump’s Education secretary, Betsy DeVos, has performed extensive private security work in the Middle East, Asia and elsewhere. Clarke, a former sheriff of Milwaukee County, Wis., known for wearing cowboy hats, has a reputation for espousing extreme law-and-order views on the conservative media and conference circuit. Tancredo made his name as a five-term congressman with constant calls for tighter border security. And Schilling has pivoted from a storied major league pitching career to a failed video game startup to hosting a podcast for Breitbart News.

Last week, the group convened for the first time in Texas.

There, they encountered groups of migrants seeking asylum. Tancredo said he was surprised that the migrants were "completely, totally unconcerned about being confronted by us," and instead were eager to find the Border Patrol so they could request asylum.

Organizers also conferred with representatives of Magal Security Systems, which built a border barrier between Israel and the Gaza Strip. In the weeks following Trump’s 2016 election, Magal offered itself as a natural candidate to build Trump’s proposed wall. Kolfage said he expects to formalize a consulting deal with the firm this week. Magal did not respond to emails requesting comment.

As it pursues its wall, the group has formed several committees, including on site selection, building and fundraising, Tancredo said.