The Rouge Collection identified one of the officers as Lt. Don Stone, who is still on the force. The other, according to The Advocate, is now-retired Capt. Frankie Caruso.

The two officers were part of an undercover narcotics operation with five other Baton Rouge cops, according to a 1993 article in The Advocate. The outlet reported at the time that the undercover cops used “chopped-up welder’s chalk” as fake crack cocaine and went into “drug ‘hot spots,’” which were predominantly black neighborhoods, to fool people into buying drugs.

The operation led to 10 arrests of people who attempted to buy the fake drugs from the officers in blackface, according to the article. It said one man in his 50s offered to pay for the phony dope with food stamps. 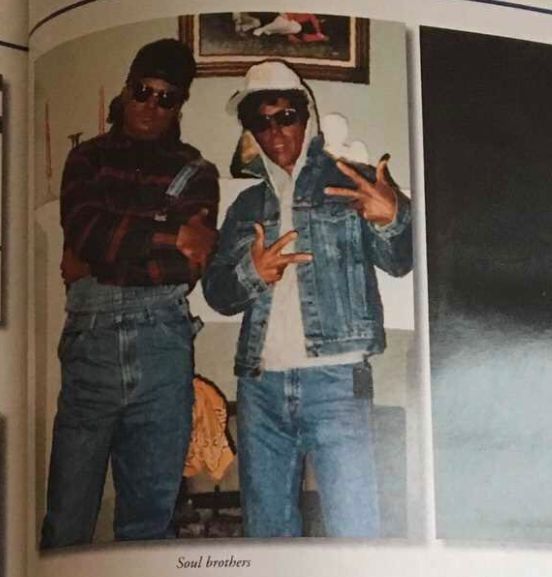 Caruso’s “wife made him and Stone up to look black,” the 1993 article reported.

“Not only do they not know we’re cops ― they don’t even know we’re white!” Stone said at the time.

There were only two black narcotics officers on the police force in 1993, and they were “well known” in the targeted area, The Advocate reported at the time.

Baton Rouge Police Chief Murphy Paul confirmed in a Monday statement that the photo was from a “department-approved operation.”

Paul added that current policies do not permit police officers to wear blackface in any official capacity, but the department “cannot apply existing policies to conduct that happened before the policies were in place.”

Caruso and then-Chief Greg Phares defended their actions in an interview with The Advocate published Monday. HuffPost and other media outlets couldn’t reach Stone for comment.

“You got to dress the part. It wasn’t done offensively,” Caruso said.

Neither officer would characterize their disguises as blackface.

“I have no problem whatsoever with that these officers did,” Phares, currently the chief deputy at the East Feliciana Parish Sheriff’s Office in Louisiana, told The Advocate. “For anyone to try to make this some sort of racial issue two decades or more later is just beyond ridiculous.” “While this may have been department-approved 25 years ago, that does not make it right,” Weston Broome, a black woman, said in the statement. “Blackface is more than just a costume. It invokes a painful history in this country and it is not appropriate in any situation.”

Gary Chambers, the co-publisher of the Baton Rouge Collection, told HuffPost that this incident reflects a pattern within the police department.

“Baton Rouge has been under a consent decree since 1980 for not having enough black officers,” Chambers said, referring to a Justice Department settlement that applied to several cities in Louisiana. “This shows how bad the department had been. Rather than hire more black officers they justified painting officers in blackface.”

The police department photo adds to a string of blackface controversies.

Additionally, Katy Perry and the fashion brands Gucci and Prada have issued apologies for selling products that resemble blackface.