Lizzo is Unrecognizable in Her 'Mandalorian' Costume for Halloween

Lizzo's Halloween costume not only captured the spirit of the season, it allowed her to go out without being recognized at all. The singer dressed as Grogu - a.k.a. Baby Yoda - from The Mandalorian on Friday night. She posted a video of her costume on Instagram, but only after she used it to walk the streets of Hollywood unrecognized.

"GROGU TAKES HOLLYWOOD," Lizzo wrote alongside her video. "GROGU JUST WANNA SAY... LAST NIGHT IF YOU SAW GROGU... NO YOU DIDN'T." The singer wore a long khaki cape with a fur collar and sleeves, as well as a whispy pale wig. Of course, the real finesse of the costume was the green makeup, which covered her face, hands and, she later revealed, her entire torso. She also contoured her forehead to resemble the wrinkles on Grogu's face. She capped the whole look off with prosthetic ears and thin sunglasses.

Halloween Party in West Hollywood. Commenters applauded her makeup job and laughed at the fact that passersby didn't recognize her. They imagined the disappointment of any who might have found out later who they walked past.

"Imagine not knowing you saw lizzo till u got home," one person wrote. Another added: "Guy who took a selfie doesn't even know how lucky he is," while a third wrote: "Lizzo trolling the city is the best thing to happen this Halloween." 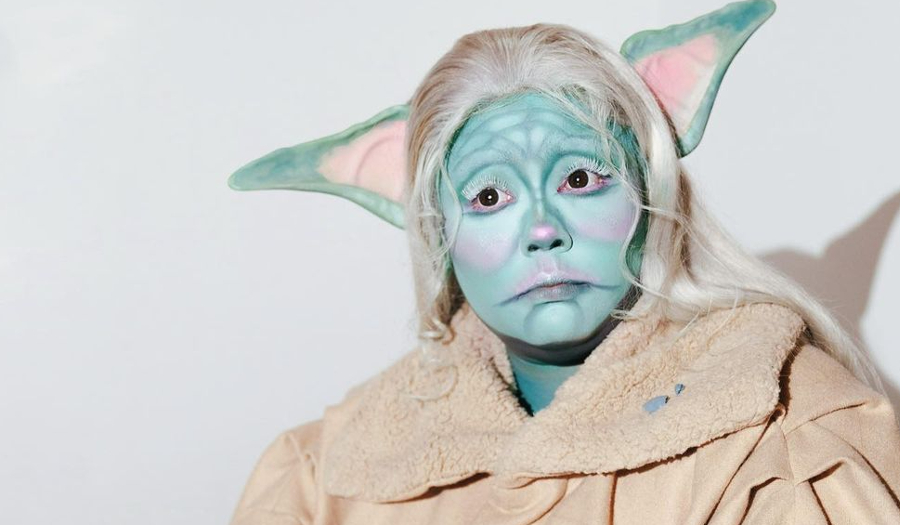 Grogu has struck a remarkable balance as one of the most beloved, most mysterious and most important characters in all of pop culture. The plot of The Mandalorian hinges on his future - and likely the future of many other entries in the franchise. However, scant details on his life have only trickled out after he became a worldwide meme.

Grogu was introduced in the pilot episode of The Mandalorian, and referred to as "Baby Yoda" by the fandom for most of that time. On the show, he was referred to as The Child up until his name was revealed in Season 2, Episode 4 "The Jedi." Even then, many aspects of his past remain a mystery, while fans are still left to wonder how his future will intersect with the Star Wars films that take place later in the canonical timeline, including the entire sequel trilogy. Fans are dying for more information, and they're not even sure where exactly it will come from. All eyes are on The Mandalorian Season 3, which began filming just this month. It is not expected to premiere until some time in 2022, with no exact date set yet. However, the spinoff series The Book of Boba Fett is scheduled to premiere on Wednesday, Dec. 29, 2021 on Disney+, so there could be more answers there.