Let’s Talk About The Black Women In ‘Joker’

“Joker” is an ugly film. That isn’t a judgment call: There are plenty of good “ugly” movies. And “Joker” is good in the sense that it is competently shot, beautifully acted, and ticks all the right boxes that a film like this, so heavily influenced by the Scorsese pictures of the 1970s, is supposed to tick.

Ugliness is a deliberate aesthetic choice of the film, an aesthetic aiding its main goal: to create a sense of atmosphere and tone so oppressive that it leaves no room for the story, or the audience, to breathe. It is a shame because as much as it plays up themes of class disparity, the pain of mental illness and the general brutal indifference of society, “Joker” doesn’t actually seem interested in exploring these themes beyond using them as atmosphere builders, as plot devices.

It is particularly relevant when it comes to the presence of Black women in Joker’s world, a presence so glaring yet so subtle it almost goes unnoticed. We see Joker, or Arthur Fleck (played superbly by Joaquin Phoenix) interact with six women over the course of the film. One of the women is a TV producer he speaks with briefly over the phone. Another is his disturbed mother, who he learns has been lying to him all his life. The remaining four women are all Black: a mother on the bus, his social worker, his neighbor/love interest Sophie (Zazie Beetz), and a psychiatrist at the mental hospital.

Individually, these characters don’t give that much pause. But collectively, their presence made me wonder if there is a reason why the majority of the women Arthur interacts with on-screen happen to be Black. All of Arthur’s interactions with women are fraught and charged, each one establishing his view of the world as a cold, apathetic hellscape. When he playfully makes a small child laugh during a bus ride, the kid’s mother turns around and snaps at him, “Will you please stop bothering my kid?” His social worker is cold and standoffish, admonishes him. At one point, he calls her out for never really listening to anything he has to say.

It would be easy to say that the film’s choices when it comes to Black women are willfully stereotypical or negative, playing up all-too familiar tropes of Black women as angry or cold. I don’t think that’s necessarily a fair distinction though. These Black female characters don’t feel forcefully lodged into the plot; they come up organically and naturally in the world that Arthur inhabits, and there are no strange or outlandish machinations that precede these interactions. Indeed, the original “Joker” script states explicitly that he lives in a Black neighborhood, though the film itself never makes this clear.

But the presence and treatment of Black women, particularly Beetz’s character, are still worth considering, especially given the fact that writer-director Todd Phillips has famously cited two Martin Scorsese films, “The King of Comedy” and “Taxi Driver,” as inspirations for this iteration of the Joker’s origin story.

In “Taxi Driver,” Travis Bickle’s racism and misogyny are implicit features of his personality. We see it in the way he sizes up the groups of Black men he encounters on the street and in the unabated glee with which he kills the Black man who robs a liquor store. Harvey Keitel’s pimp character, it should also be noted, was originally supposed to be played by a Black man. In the film’s final massacre, all the criminals Bickle kills were supposed to be Black, an indictment on his own racism, but studio executives called for that detail to be changed, afraid that there would be riots.

With “Joker,” there have been similar murmurings about how the film might incite violence, or fuel the ideologies of incel culture. Of course, “Taxi Driver,” which “Joker” borrows heavily from, didn’t cause riots. But “Taxi Driver” is a smarter movie than “Joker,” which, as writer Sarah Hagi aptly pointed out on Twitter, might as well be called “We live in a society: the movie.” In other words, it simply doesn’t have the range.

Where “Taxi Driver” makes it clear that Bickle’s desire to rid the streets of “scum” is not actually a noble crusade but rather the result of his own selfish neuroses and prejudices, “Joker” never quite delves deep enough beyond its indictment of a nebulous arbitrary “system.”

There’s a fleeting, promising moment in the movie when Arthur’s social worker informs him that funding for the program has been cut, and she will no longer be seeing him. She makes a comment, something along the lines of, “They [the people at the top] don’t care about people like you and me.” But the line just sort of hangs there in the air; it doesn’t seem as if Arthur has actually absorbed (or can actually absorb) the idea that he is not the only cog in this grinding, indifferent machine. Rather than a critique of institutional abuse, the exchange feels more like an indictment on the individual for not understanding him, thereby justifying his hatred and his violence.

Much like “Taxi Driver” and its ambiguous final montage, the thing to remember about “Joker” is that the story is being told intentionally and specifically through the main character’s eyes. In the third act, the audience learns that the budding romance we’ve witnessed between Arthur and Sophie has been all in his mind. He barges into her apartment, unannounced, and a startled Sophie pleads with him to leave.

The film cuts to the next scene, never showing Sophie’s fate. The ambiguity of Sophie’s fate is, in a sense, largely emblematic of the ambiguity with which this film tackles gender and race. It also calls into question everything else we’ve seen up to this point ― the asshole finance bros whom Joker kills early on in the film, his overbearing mother, Thomas Wayne’s cruelty. The trick of “Joker” is presenting us Arthur’s skewed version of the world as true and then, and the last minute, forcing us to question our own empathy for him. At least, that’s the idea. 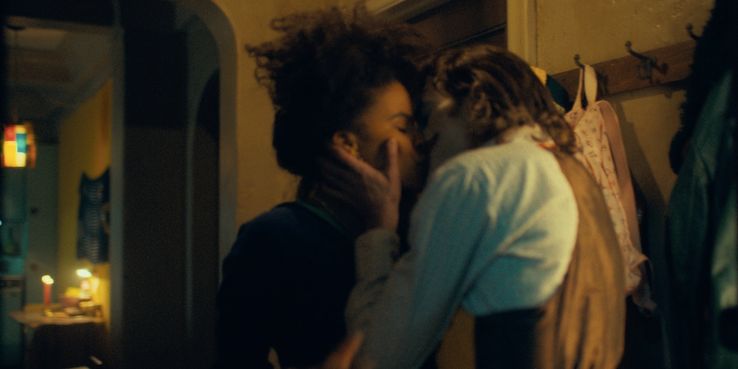 That’s why his interactions with Black women are interesting, especially his infatuation with Sophie. If Black women play roles of alienating authority in his everyday life, it’s significant that he would project a romantic fantasy onto a Black woman, casting her as the nurturing and supportive female figure that has eluded him up until now.

This is all worth thinking about, especially in a film that seems to be trying (but ultimately fails) to make some sort of commentary on the disparity between the haves and the have-nots. A racial reading of this movie is perhaps the last thing Phillips, who recently lamented how “woke” culture killed his desire to make comedy, wants the viewer to take away from this. But you can’t really have a discussion about class without having a discussion somewhere in there about race. I doubt Phillips was trying to make any sort of intentional commentary with his placement of Black women in positions of antagonizing authority or elusive romantic obsessions, but that’s what makes these characters, arbitrary as they seem, so important.