All the prophets of fashion assembled in the Théâtre des Bouffes du Nord this morning at 8 a.m. Simon Porte Jacquemus, Haider Ackermann, Olivier Rousteing, Jean Touitou, Michèle Lamy, Sarah Andelman, Carlyne Cerf de Dudzeele, editors, stylists, writers, and peripheral fashion disciples all sat on cloth benches to hear the word of another. Even Cédric Charbit, the CEO of Balenciaga, was in the front row, despite the fact that his brand’s fall 2020 collection was to be presented in a mere two hours.

Instead of hearing sermons on pant lengths, flounce sleeves, or wardrobe dressing, as we have these past four weeks in New York, London, Milan, and Paris, we were there to hear the word of a messenger who was serving a higher master. It was Kanye West’s Sunday service.

It was a big morning, especially big because it was the 26th consecutive day of fashion shows in four countries. And yet fashion and religion remain inextricably related.

The fall 2020 season has taken on a decidedly sacred tone with vestment-inspired ensembles walking runways from Rodarte to Paco Rabanne. The entire fashion show experience mimics that of a ritual or sacrament, and as an industry we vault our stars to saintly levels, treating them with holy reverence. So, in some ways assembling in a round theater, air kissing our friends and colleagues—from at least three feet away, of course, thanks to ongoing worry about COVID-19—and smushing together in too-small seats to see a show was none too strange.

It might have been strange for West, whose Sunday services have remained close friend-and-family affairs until this one. But he is likely to issue his statements on that tomorrow, when he sits down for interviews with the press and presents his Yeezy season eight collection. Today, his wife Kim Kardashian West, daughter North West, sister-in-law Kourtney Kardashian, and niece Penelope Disick represented the West contingent in the audience.

The sermon began with a processional of a choir making its way into concentric circles around a simple pine piano. Each wore a beige cotton drill uniform of V-neck top, loose pants, turtleneck, gold necklace, and Yeezy sneakers. A platform behind the piano provided a stage for the event’s pastor, and a place for West to stand beside as the choir—all flown in from Los Angeles for this performance—danced around.

This was not the woo-woo spirituality popular in the fashion sphere, but most of the audience appeared to be comfortable accepting the word of Jesus Christ Lord and Savior—and his prophet Kanye West. There was plenty of clapping, swaying, and singing along. Even when the sermon took on an anti-materialist tone, fashion people in their Balenciaga coats, Chanel bags, and Christian Louboutin shoes, listened, rapt. 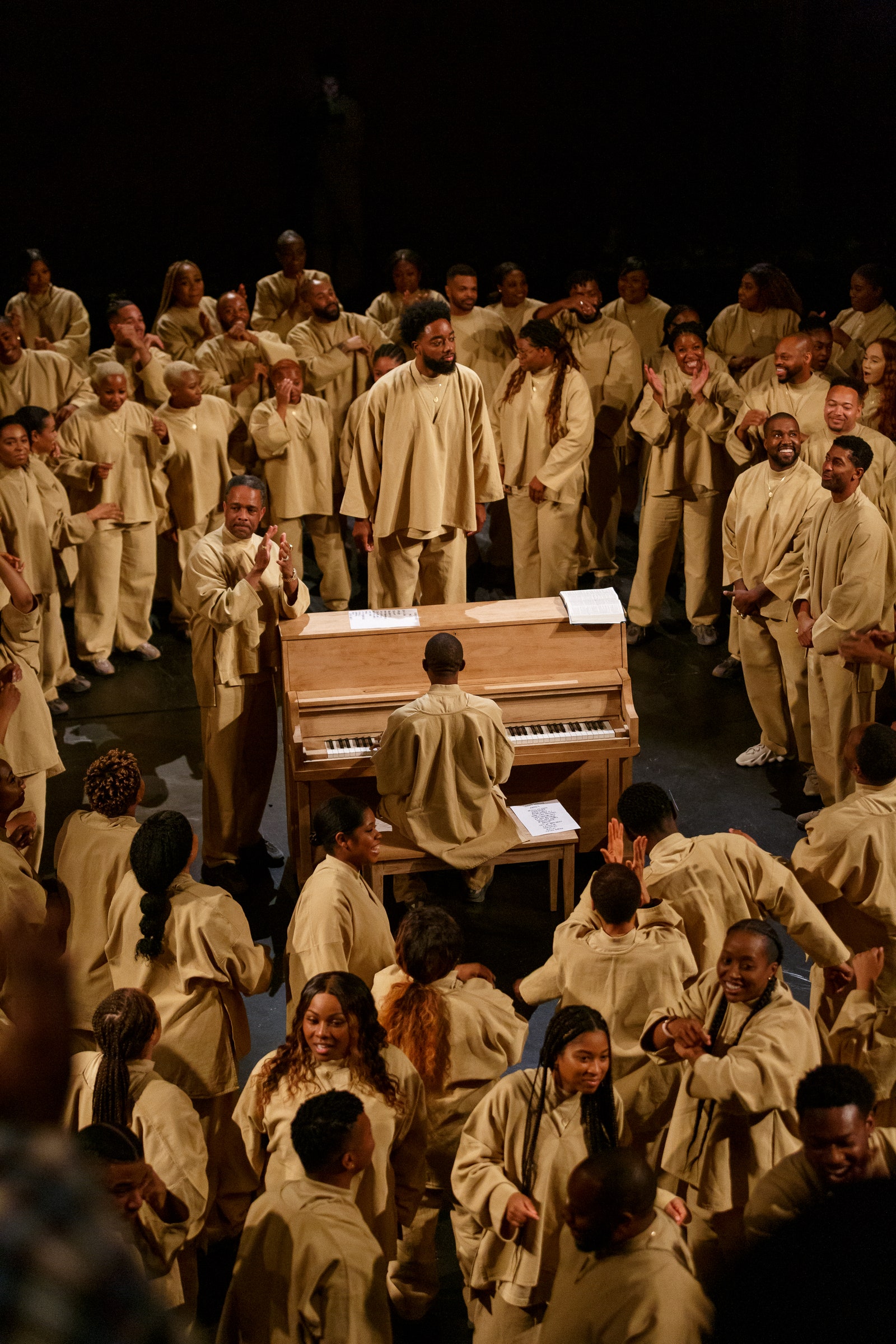 That was the most pointed jab at his audience West offered. Or maybe it wasn’t a jab at all—the Bible says that the meek shall inherit the earth. Still, there’s something odd about luxury industry types crowding into a decrepit theater and cosplaying as everymen before hitting up the next fashion show.

Even so, West’s sermon offered something that fashion month lacks. For all the spectacle, few runway shows are actually moving or emotional. Few get people on their feet. Through a high-key sermon that turned Portishead, Elton John, and his own music into religious-themed songs, West created a truly poignant experience. Only Marc Jacobs’s bare-bones dancers at New York Fashion Week and Gucci’s tribute to the art of fashion in Milan produced similar groundswells of feeling. 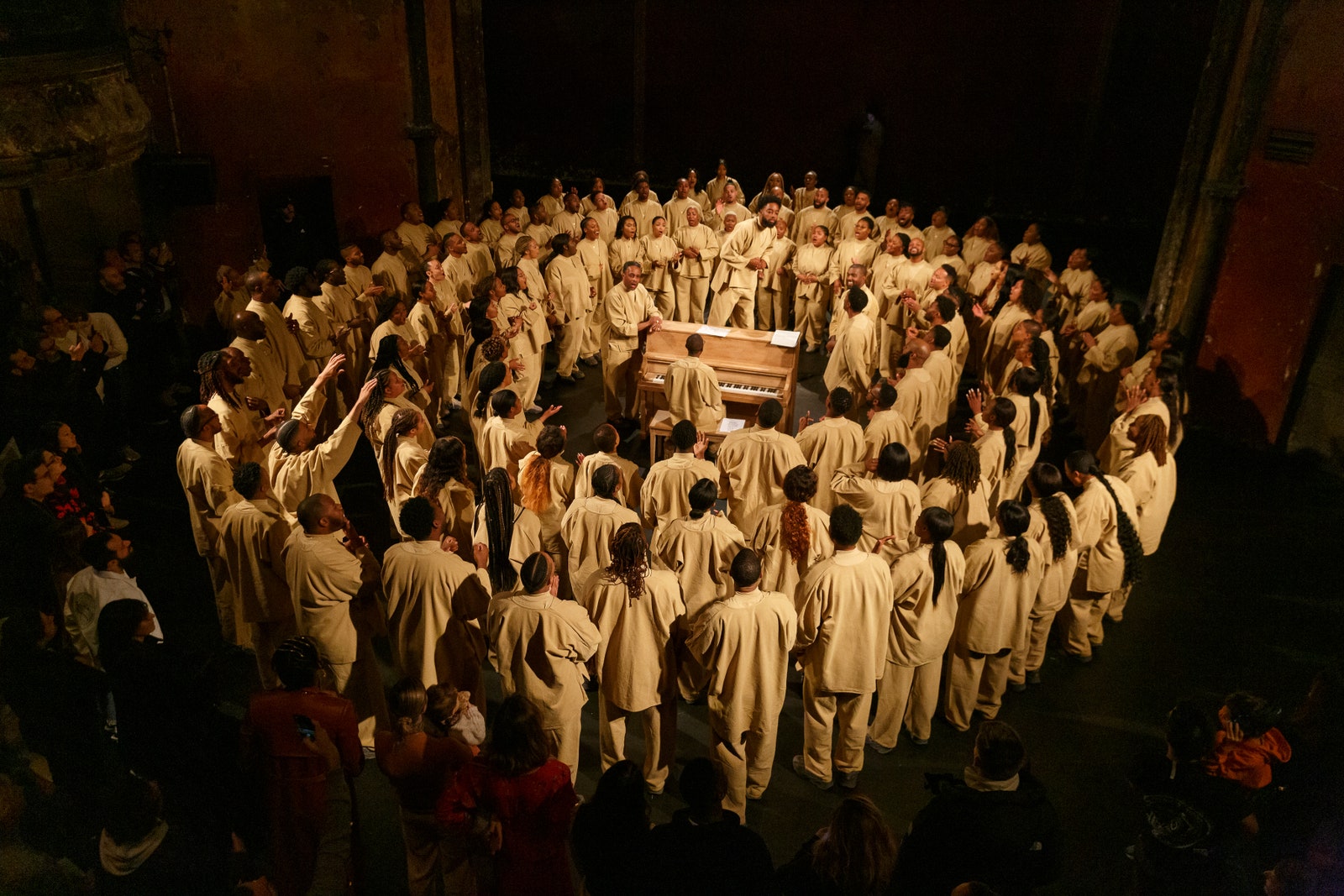 People were beaming as they exited, frantically looking for their cars to dart off the to the Balenciaga show in Saint-Denis. Once arriving there, they would see models walking on water and visions of a brimstone end from Demna Gvasalia. All the prophets seem to be riding the same vibes: The end is nigh. West advises seeking solace in God (and possibly his new Yeezy collection, to be seen tomorrow); Gvasalia offers an escape in a perfectly tailored neoprene suit. “A faith walk is a daily choice,” said West’s pastor at one point. Up to you to choose in whom to place your belief.