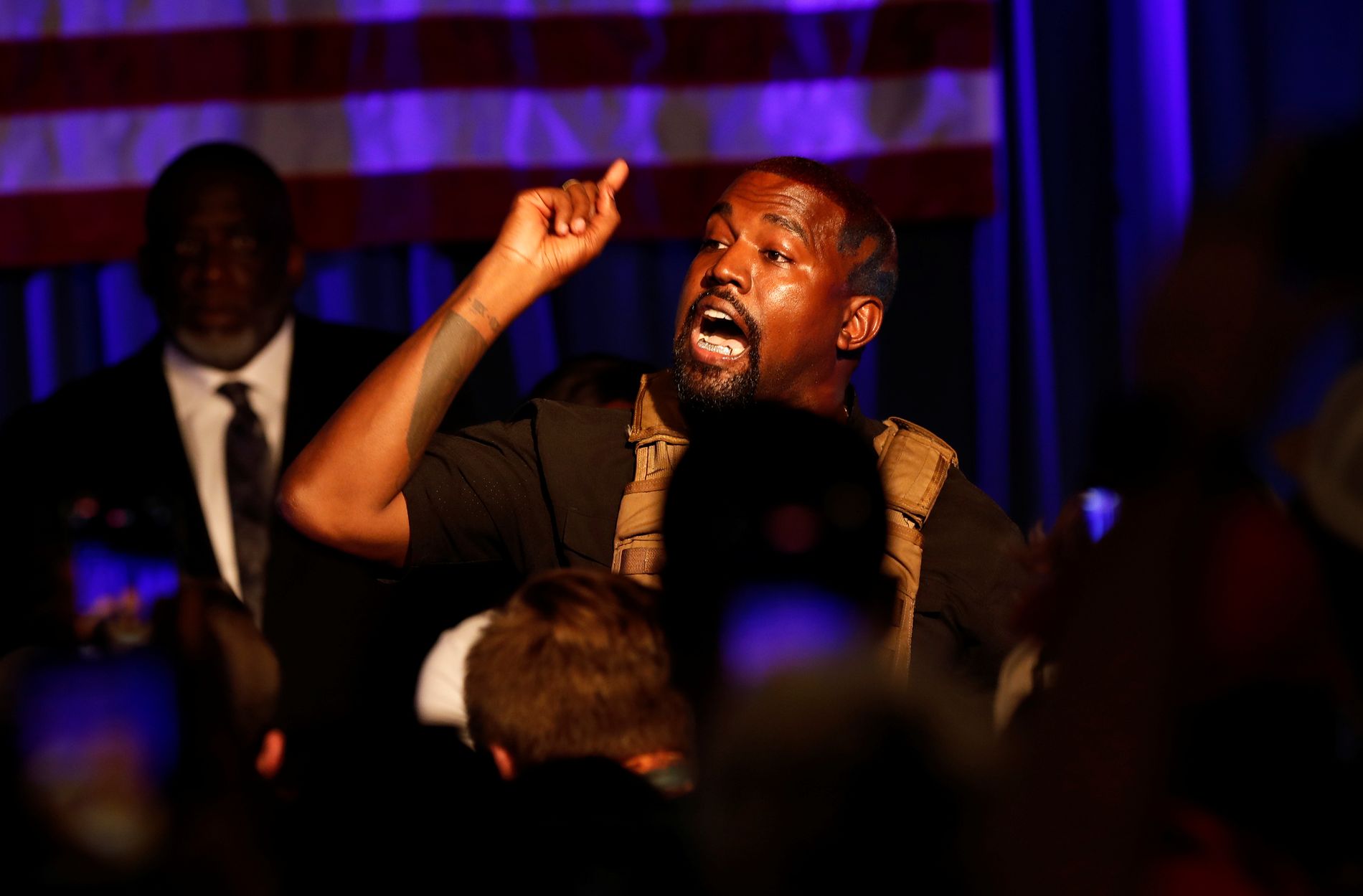 Kanye West has shared shocking footage of himself urinating on a Grammy Award as he 'goes into battle' against labels Universal and Sony to try and retrieve the rights to his own music.

The rapper, 43, posted the vision to his Twitter feed on Wednesday afternoon, which showed one of his 21 Grammys placed inside of a toilet bowl.

'Trust me... I WON'T STOP,' West captioned the clip, which referred to his current bid to gain ownership of his masters - otherwise known as the copyright to his original songs.

It came amid a Twitter rant that lasted several hours, during which he violated the social media site's code of conduct after he shared the personal contact details of a magazine editor he called 'a white supremacist'.

'If any of my fans want to call a white supremacist... this is the editor of Forbes,' West wrote above the phone number of the publication's editor Randall Lane.

West has repeatedly hit out at the magazine in the past for failing to label him as a 'billionaire'. Twitter took 30 minutes to hide the tweet with Lane's details, which has now been deleted.

In a separate tweet, the star also joked that his wife, Kim Kardashian, would represent him in legal proceedings.

However, the reality star has not yet commented on her husband's latest antics.

Kardashian is taking 24 hours off Facebook and Instagram to protest the spread of 'hate, propaganda and misinformation' on the social networks.

West's current battle with his labels began on Monday, when he attacked the structure of the music industry, declaring that musicians actually had little to no power because record labels owned all of their work.

He took aim at his labels Universal and Sony and vowed not to release any new music until he was freed from his contracts with them.

In a stinging tweet on Tuesday, West also savaged the strict contracts that black NBA players were under, and stated: 'The music industry and the NBA are modern day slave ships. I'm the new Moses'.

Taking to Twitter again on Wednesday morning, the rapper repeated the same sentiment, claiming: 'There is no NBA or music industry without black people... fair contracts matter... ownership matters.'

West also shared the screenshots of a private contract he signed with Universal back in 2011, just minutes after he tweeted: 'I feel so humbled and blessed that God has put me in a strong enough position to do this ... Everyone keep praying.. It's working... I am on my knees this morning.'

He then appeared to address black artists directly, and claimed that there needed to be an overhaul in the business.

'We've gotten comfortable with not having what we deserve ... they [record labels] allow us to have a little money from touring, get some gold chains, some alcohol, some girls and fake numbers that feed our egos ... but we don't own our masters,' he wrote.

He further accused the media of 'trying to kill' black heroes, including Michael Jackson.

During his Wednesday Twitter rant, West also stated that he was too powerful to be 'muted or cancelled' and declared that he was rich enough to buy his masters from Universal and Sony.

'Universal won't tell me what my masters cost because they know I can afford to buy them,' he taunted in a tweet shared shortly after 6am PDT.

West has a reported net worth of $1.3 billion. The cost of his masters is likely to be upwards of $300 million.

Back in 2018, Scooter Braun bought Big Machine Label Group for that price, acquiring almost all of Taylor Swift's masters in the process.

West went on to share a number of Biblical verses, before writing: 'I KNOW MY LORD AND SAVIOR JESUS CHRIST WILL MAKE FOOLS OF AND PUNISH ALL WHO HAVE PARTICIPATED IN UNFAIR CONTRACTS'.

He added: 'I will do everything in my legal power and use my voice until all artist contracts are changed, starting with getting my masters for my children. I will not stop, I promise you. I am petty and very personal.'

He further claimed that the bid to own his masters was to ensure the future financial security of the four children he shares with Kardashian.

Referencing his daughter, North, he stated: 'She will be able to do nothing but put up emojis for the rest of her life because my children will own my masters.'

On Monday, West hit out at the fact most artists do not own their masters.

'In the streaming world master ownership is everything... that is the bulk of the income ... in COVID artist need our masters,' he wrote.

'Artists are starving without tours ... Ima go get our masters ... for all artists ... pray for me.'

Later in the day, he reportedly tried to contact Universal and Sony about being released from his contracts.

The following day he shared a text conversation on Twitter about possibly taking legal action against Universal and Sony after failing to hear from them.

In the actual text conversation, the individual who could be a lawyer writes: 'Meaning that we can argue that Universal and Sony have not supported you fully. And that as a result they have breached. This is the lawsuit/termination nuclear option.'

The individual continues: 'If we went that route we would litigate and ask for your masters as part of a settlement. This is a high risk but high reward strategy.'

At some point, West and the individual spoke about Taylor Swift and the controversial $300million deal that Scooter Braun, who manages Justin Bieber and Ariana Grande, struck in order to obtain her master recordings in 2019.

'Re masters ownership we can look into buying. But if Taylor's [Swift] cost $300million yours would cost a lot more I assume. Remember that if you re-recorded these songs you could own these new masters outright,' the person speaking with West wrote.

'A much more radical consideration would be to propose an entirely new relationship or joint venture with Universal. One that is equal and not one sided. I am not sure you are interested in that. But if [sic] could be a Yeezy Media/Universal joint venture play but one where you have the power,' the person continued.

In response to those text messages, West responded: 'I'm not open to any form of business with Universal or Sony.'

The incident comes following his failed bid for President - a move which prompted many armchair experts to say he was in the midst of a bipolar episode.

West first acknowledged his bipolar disorder in 2018, a condition that is associated with episodes of mood swings ranging from depressive lows to manic highs and can be controlled with medication.

Kardashian hinted last month that his struggle with bipolar was to blame for his recent erratic behavior, that has seen him embark on the unlikely bid for presidency and get emotional at his first campaign rally in South Carolina while discussing abortion.