A Kentucky Catholic bishop claims a third-party investigation has cleared Covington Catholic High School students of any wrongdoing during a confrontation with a Native American elder at the Lincoln Memorial that went viral last month.

Covington’s Bishop Roger Foys told parents he was “pleased” to report that an investigation initiated by the diocese and conducted by a Cincinnati detective agency has accomplished exactly what he expected: exonerating “our students so that they can move forward with their lives.”

“In truth, taking everything into account, our students were placed in a situation that was at once bizarre and even threatening,” Foys wrote in a letter Monday. “Their reaction to the situation was, given the circumstances, expected and one might even say laudatory.”

Covington Catholic High School shot into the national spotlight in January after a video surfaced online that appeared to show its students mocking a Native American man after attending an anti-abortion march in Washington, D.C. Additional videos from different angles depicted a more complicated view of the incident, suggesting it was actually a fluid, three-way confrontation involving the Catholic students, Native American demonstrators and a group of Black Hebrew Israelites.

Some of the Catholic students involved in the incident were wearing President Donald Trump’s “Make America great again” hats. That prompted a bishop from a neighboring Kentucky diocese to admonish the students, insisting that the teens can’t claim to be “pro-life” while wearing the slogan of a president who devalues the lives of immigrants and refugees.

HuffPost reached out to the bishop Wednesday for comment on the investigation report and will update the article if he responds.

The inquiry was conducted by Greater Cincinnati Investigation Inc, a detective agency Foys says has no connection to the diocese or high school. According to the report, four investigators from the agency spent about 240 hours interviewing 43 Covington Catholic students and 13 trip chaperones. The agency also reviewed about 50 hours of social media posts.

The investigators weren’t able to get in-person interviews with Native American activist Nathan Phillips and Covington Catholic high school student Nick Sandmann, who appeared to be involved in a standoff during the January incident. The report claimed Phillips didn’t respond to multiple interview requests. In media interviews, Phillips has claimed he stepped in to reduce tensions between the white students and black protesters. Sandmann’s lawyers referred investigators to a statement about the incident the teen made on Jan. 20, when he told CNN he was trying to defuse the situation.

HuffPost has attempted to reach Phillips for his reaction to the report. The article will be updated if he responds.

“Some students performed a ‘tomahawk chop’ to the beat of Mr. Phillips’ drumming, and some joined in Mr. Phillips’ chant,” the report said.

The agency claimed that most students purchased the MAGA hats after they arrived in Washington for the anti-abortion rally. Some chaperones said that during previous trips, Covington Catholic students had purchased “Hope” hats, based on President Barack Obama’s campaign slogan. There is apparently no school policy prohibiting students from wearing political slogans on school trips.

In regard to the interaction between Sandmann and Phillips, investigators said that the teen’s Jan. 20 statement “appears to accurately reflect the facts surrounding the interaction.” On the other hand, the agency claimed Phillips’ public interviews “contain some inconsistencies” that they haven’t been able to resolve because they weren’t able to get in touch with him.

The Covington diocese received heated pushback from parents after it initially denounced the students’ actions as “opposed to the Church’s teachings on the dignity and respect of the human person.” Foys later claimed he was “bullied and pressured into making a statement prematurely.” 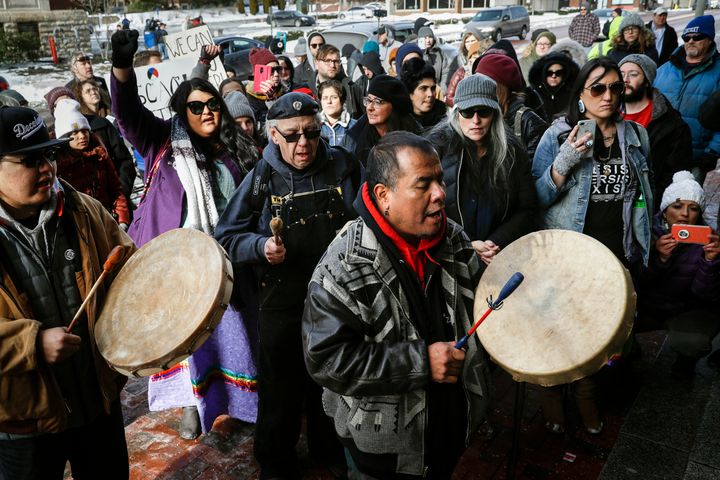 The high school and diocese were the focus of a peaceful protest from Native American groups in January. The diocese claims it has also received threats of violence in the wake of the controversy.

Foys now claims the investigation demonstrates that Covington Catholic School students “did not instigate the incident.”

“These young high school students could never have expected what they experienced on the steps of the Lincoln Memorial while waiting for the buses to take them home,” the bishop wrote. “Their stance there was surely a pro-life stance. I commend them.”