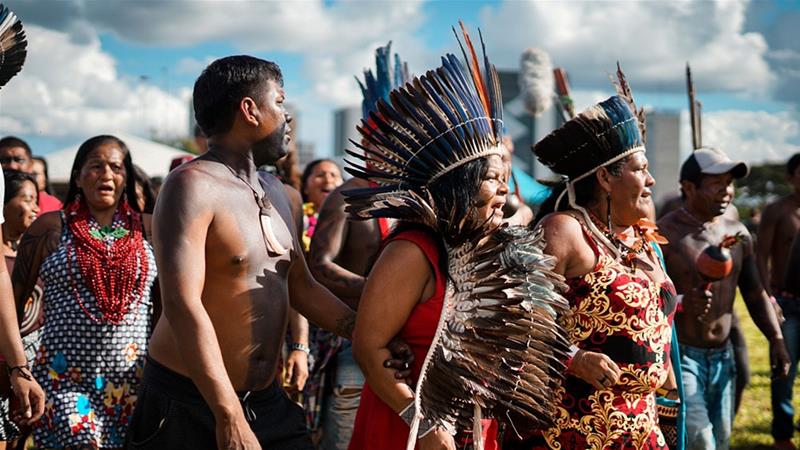 Thousands of indigenous people decorated with traditional feathers and body paint converged on Brazil’s capital on Wednesday to defend hard-won land rights many fear could be eroded by far-right President Jair Bolsonaro.

Heavy security, including riot police, was deployed for the annual three-day lobbying effort in the heart of Brasilia, where representatives from various tribes have set up camp along the broad avenue leading to Congress.

Next to tents pitched on the grass, demonstrators displayed posters declaring “Our land is sacred,” “No mining on indigenous lands” and “We demand the demarcation of our lands” as others sang and danced during the first such protest under Bolsonaro, a champion of farm businesses, mining and logging who took power on January 1.

“We do not just fight for constitutional rights, we fight for the right to exist,” indigenous leader Sonia Guajajara told reporters.

Around 2,000 indigenous people have arrived so far, according to AFP journalists. Organisers of the tribal camp said nearly 4,000 had turned up to the event that was given little coverage by major local media outlets. 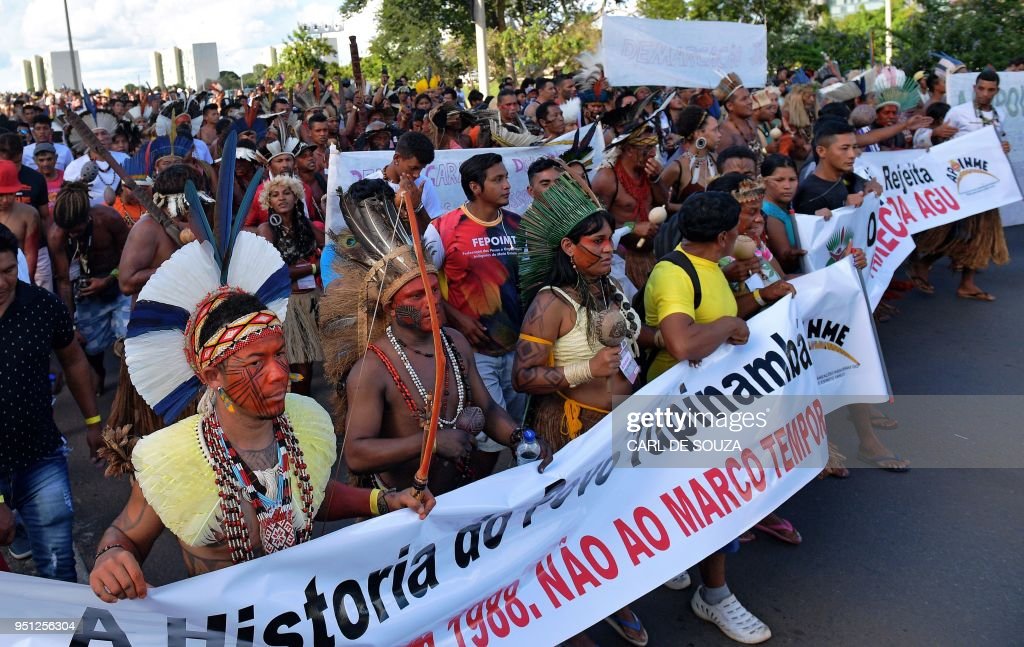 “We came here for an important cause — it was very difficult for us, our ancestors, to win these rights and little by little they are decreasing,” said Camila Silveiro, 22, from the southern state of Parana. “We came here to ask for more respect.”

Luana Kumaruara, an anthropology student from the northern state of Para, accused Bolsonaro’s government of attacking “all” the rights of indigenous people, including education and health.

There are more than 800,000 indigenous people and more than 300 different tribes in the country of 209mn people, according to Brazil’s FUNAI indigenous affairs agency.

They have long fought to preserve a way of life imperiled since European colonialists arrived in South America more than 500 years ago.

But the situation has deteriorated dramatically under Bolsonaro, an indigenous alliance has warned.

“We are experiencing the first stages of an apocalypse, of which indigenous peoples are the first victims,” 13 signatories said in a piece published in French daily Le Monde earlier this month.

Bolsonaro has vowed to “integrate” Brazil’s indigenous people, in part with new roads and rail lines through the Amazon and clearing more areas for agriculture.

“The Indian cannot continue to be trapped within a demarcated area as if he were a zoo animal,” the populist leader once said.

Guajajara on Wednesday rejected Bolsonaro’s comments, telling reporters: “We don’t want the society that Bolsonaro wants to introduce us to.”

Bolsonaro has been less than welcoming to the protesters in Brasilia.

In a Facebook Live broadcast last week, he suggested Brazilian taxpayers would foot the bill for the “10,000 indigenous people” who take part — a claim rejected by organisers who said they were using their own funds to pay for the event.

“This government that is in power today is trying to exterminate the indigenous people, but our people are warriors,” indigenous leader Cacique Dara told reporters. “We don’t care about wealth, what’s important is nature.”

Protesters at the “Acampamento Terra Livre”, or “Free Land Camp”, hope to meet with members of Congress and the Supreme Court in the coming days as they push for greater protection of their lands.

Bolsonaro has already stripped FUNAI of the power to define native land, giving that authority instead to the agriculture ministry.

There are more than 400 demarcated territories across the vast country, established in the 1980s for the exclusive use of their indigenous inhabitants.

Bolsonaro vowed during last year’s election campaign that he would not give up “one centimetre more” of land to indigenous communities in Brazil, home to around 60% of the Amazon rainforest.

According to conservation group Imazon deforestation increased 54% to 108sq km in January — the first month Bolsonaro was in office — compared with 70sq km a year earlier.

Arara indigenous people in Para state told AFP recently that illegal logging on their lands had intensified in the opening months of Bolsonaro’s presidency.