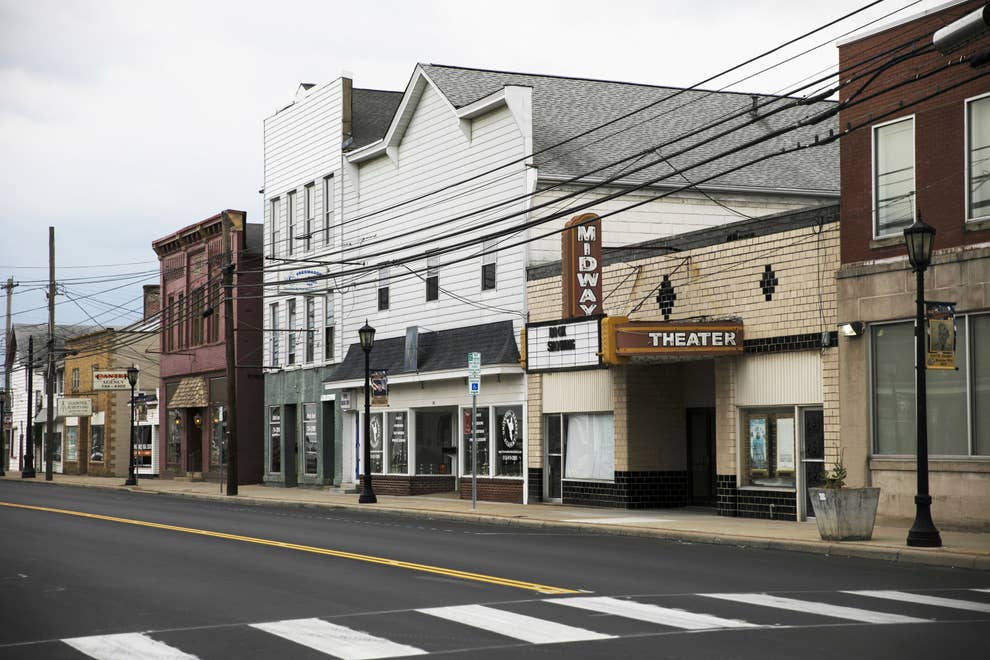 Alicia Gee said she was preparing on a cheerful Sunday morning not for church, but for a demonstration “long overdue in my little town.”

“A demonstration to show my neighbors there are people who care, to show my very monochromatic town that Black Lives Matter,” said a Facebook post from Gee, who identified herself as a lifelong resident of the village of Bethel, Ohio — population roughly 2,800. It was a testament to the wide reach of the movement against racism and police brutality convulsing the country since George Floyd’s death in police custody, weeks of demonstrations that have swept from cities to suburbs and tiny Midwestern towns that haven’t seen protests in decades.

But the 80 or so expected demonstrators ended up dwarfed Sunday afternoon by about 700 counterprotesters — motorcycle gangs, “back the blue” groups and proponents of the Second Amendment, village officials said. Some carried rifles, a local news station reported, while others brought baseball bats and clubs. Police say they are investigating about 10 “incidents” from the clashes that followed, including a demonstrator being punched in the head. 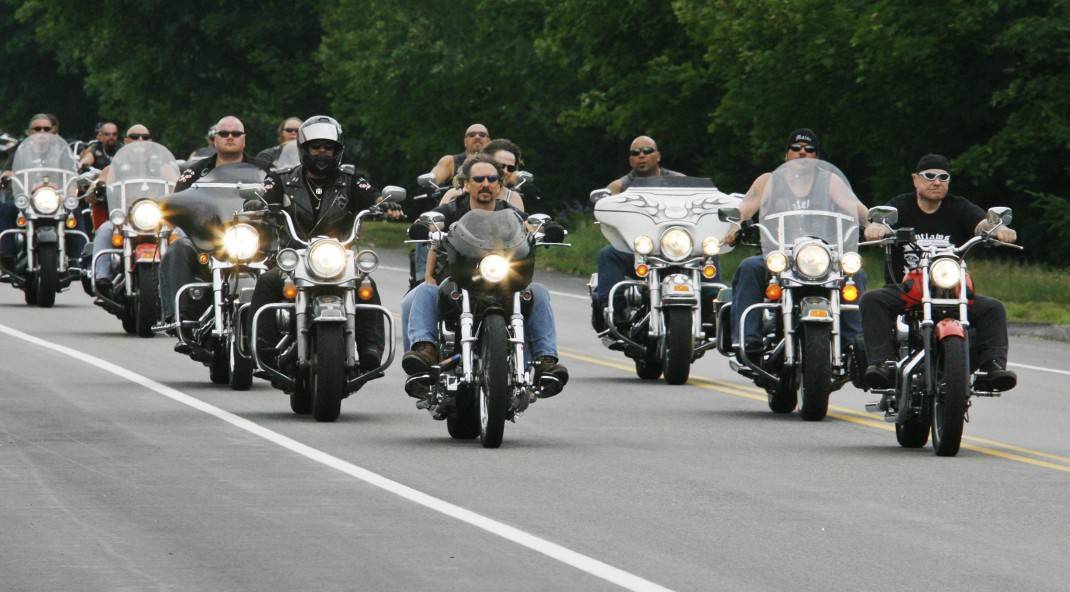 By Monday evening — after another tense day of standoffs — the mayor had imposed a curfew while citing “the threat of continued and escalating violence,” and Gee had a new message: “It is not a time for any type of Black Lives Matter supporters to be in Bethel,” she said in a video posted to Facebook. “It’s not safe.”

“Our purpose was not to create division in our community, and right now, that division has been just exploded,” she said, urging the mayor to “stand up” and denounce the people who she said had flocked to Bethel not to exercise their First Amendment rights but to “incite fear and hatred.” 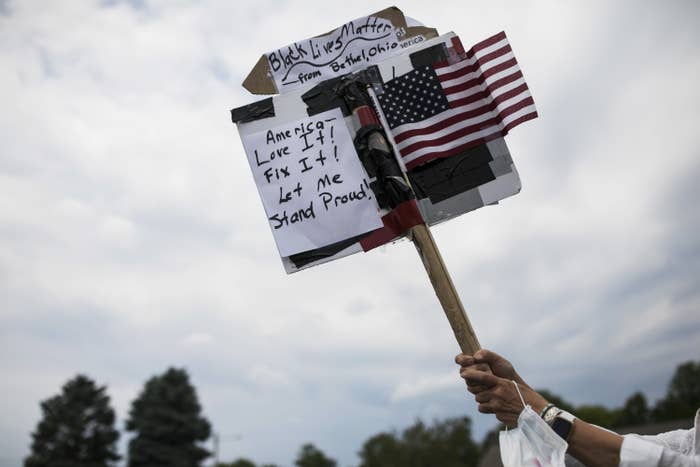 Bethel Village Administrator Travis Dotson said village leaders are dismayed that people feel Bethel isn’t safe for protesters and that the council wants to schedule a meeting and address Gee’s concerns. He said that he was not aware of more violence Monday, when crowds had shrunk to 100 or 150 people, but that there were arrests — for what, he’s not sure.

No one was arrested Sunday because police were so overwhelmed that they had to focus on maintaining order and safety, he said; on Monday, more law enforcers from multiple agencies were there to help.

“It was a local group. It wasn’t an outside influencer coming to the village,” he said of the original demonstrators. Many of the counterprotesters were from out of the town, he said, some with out-of-state license plates on their motorcycles. 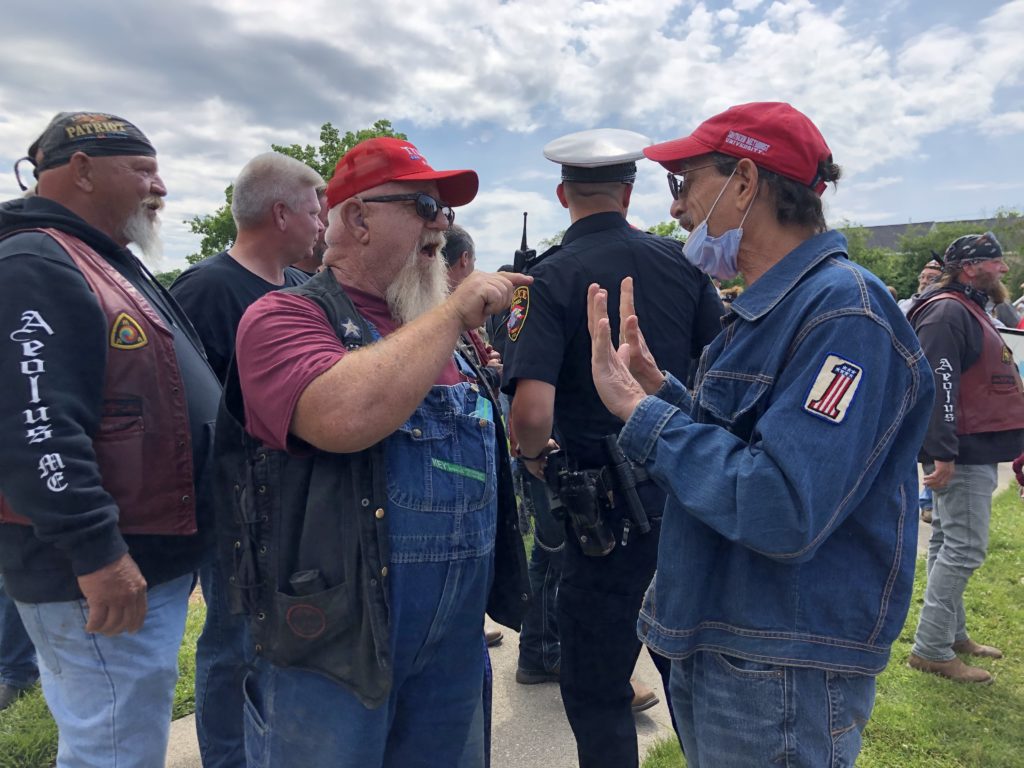 “We certainly support her rights,” Dotson said of Gee.

The mayor did not immediately respond to inquiries, and police referred all questions to his office Tuesday.

Gee, a teacher, has told The Cincinnati Enquirer that she did not think of Sunday’s gathering as a protest — the Facebook event was called “Bethel’s Solidarity with Black Lives Demonstration.”

“I guess in my mind, we only think about protests happening in the city,” she told The Enquirer. “I’ve always gone to cities to protest. And then to see that something was happening in Hazard — I was like, if Hazard, Kentucky, can have a protest, Bethel can have something.”

But she wrote on social media that she was driven to the streets by the series of deaths that have rallied people across the country against police violence against black Americans.

“The events of the last few weeks (have) made it perfectly clear to me it’s time for my comfort to be put by the wayside, it is time for me to use my body, my voice and my (privilege) to show my town that it is not ‘fine,’ that it’s not just ‘city folks’ that have the right to peacefully assemble, and that Black Lives Matter even if there are just a few in our town,” she wrote. 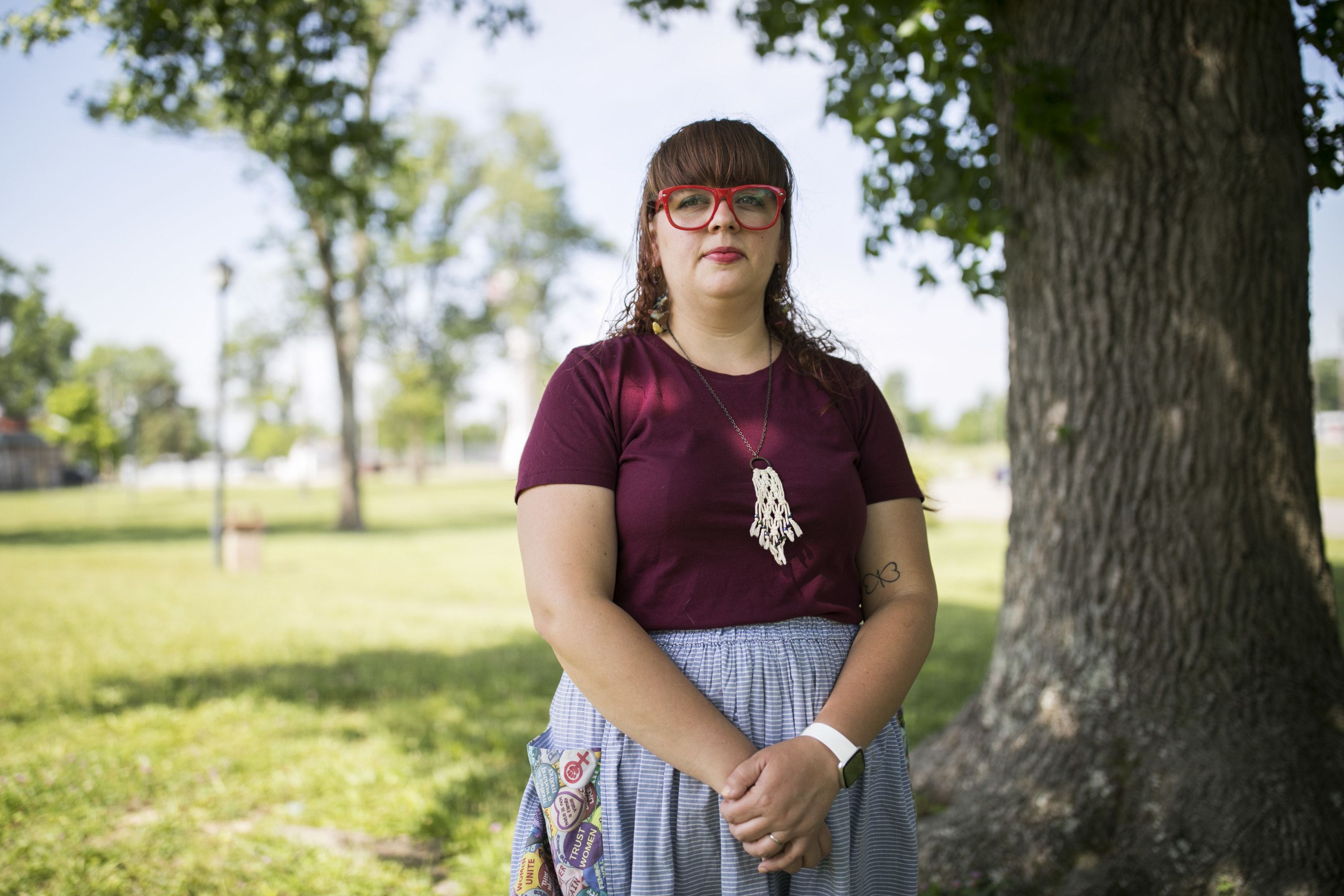 By 2 p.m., an hour before the demonstration was set to begin, the bikers had started to arrive, the village of Bethel said in a statement. Soon, the statement said, about 250 motorcycles had taken up the space intended for the Black Lives Matter event, pushing those demonstrators two blocks away.

By 3 p.m., authorities estimated that there were as many as 800 people in the area.

All six of Bethel’s police officers were on duty at the demonstration Sunday, according to village officials. Some county deputies were scheduled to help, but most were pulled away on an urgent call at the last minute, they said. And those who remained were stretched thin by violence initiated by the counterprotesters, Dotson said, mostly shoving.

One video, which the poster said showed his “niece getting pummeled by bikers,” captured an altercation in the crowd amid chants of “Blue lives matter!” and “All lives matter!”

“This ain’t Seattle!” a man yells in another video. “We’re not in a Democratic state here!”

Bethel resident Abigail Remers wrote on Facebook that her brother was “sucker-punched from behind.”

“Counterprotesters started walking down on the other side of the street from up town, yelling obscenities and threatening us … ripping signs out of our hands, ripping the hats and masks off of our faces, ripping things out of our pockets,” she wrote, above a photo of a man’s bloody face.

There will be an independent inquiry into the punching incident, Dotson said, which will also examine the actions of an officer who was nearby when it happened. The victim was not badly hurt and has declined to press charges, he said. 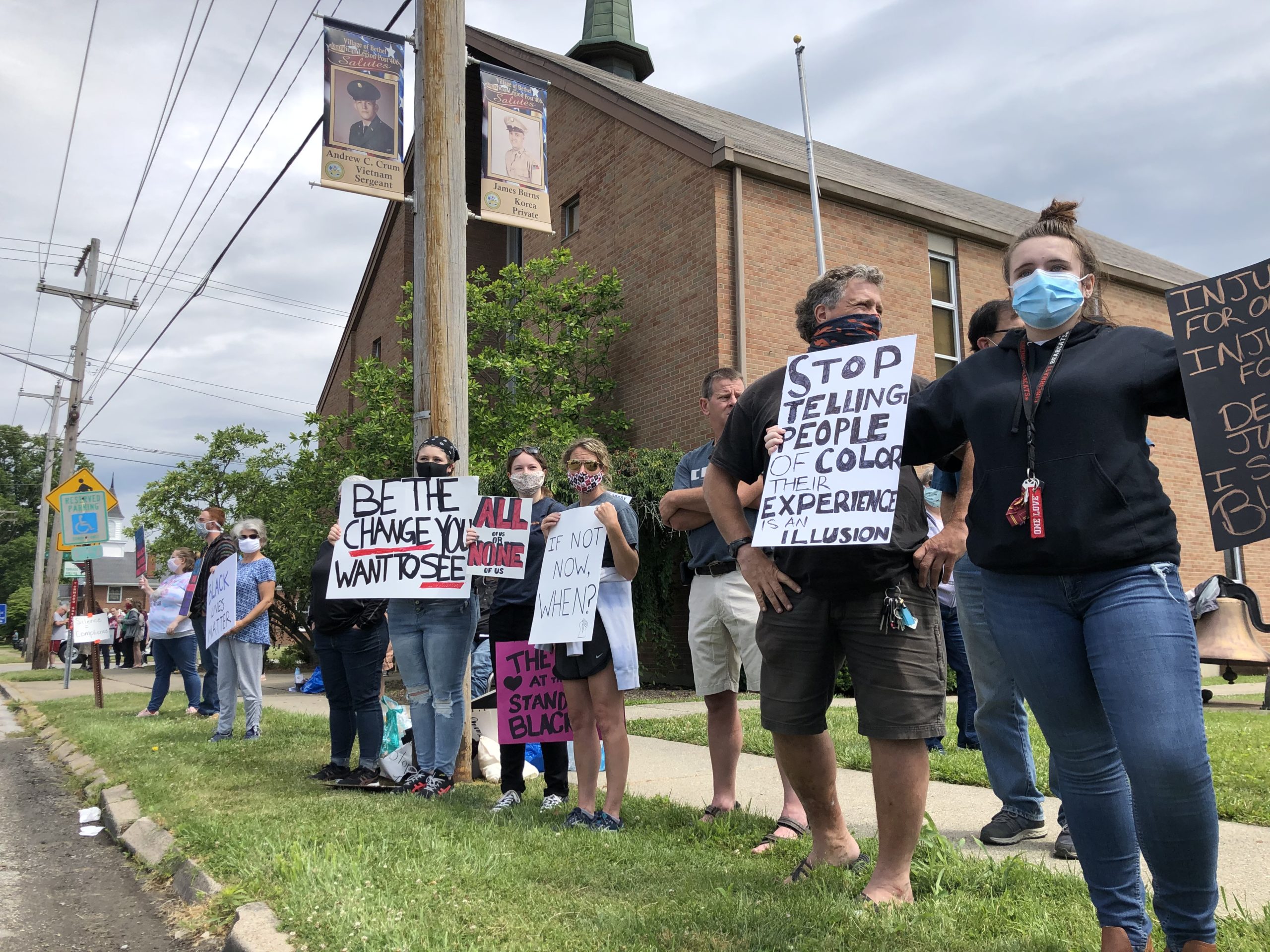 The situation threatened to escalate Monday. In a video posted that day by Fox 19, Bethel Police Chief Steve Teague said authorities got images in the morning of social media posts “with some guns and things saying we’re going to Bethel; we’ll take care of what they didn’t take care of yesterday.” But the rumors of people being bused in turned out to be false, Fox 19 said.

“If you’d asked me a week ago if any of this was going to come to Bethel, I would have said ‘never,’” Teague said. “And I still am kind of in shock of it being here.”

Video from Fox 19 captured him speaking to the crowd.

“All lives are important, OK?” the chief said.

“Yes!” some responded. There was clapping.

“I’m not saying I’m for one side or another, OK?” Teague said.

The mayor of Bethel responded to the chaos with a 9 p.m. to 6 a.m. curfew order Monday, and by Dotson’s account, people complied.

“Our purpose was to show our community that it cares, that it loves the people within our community,” Gee said. “And right now that cannot happen.”