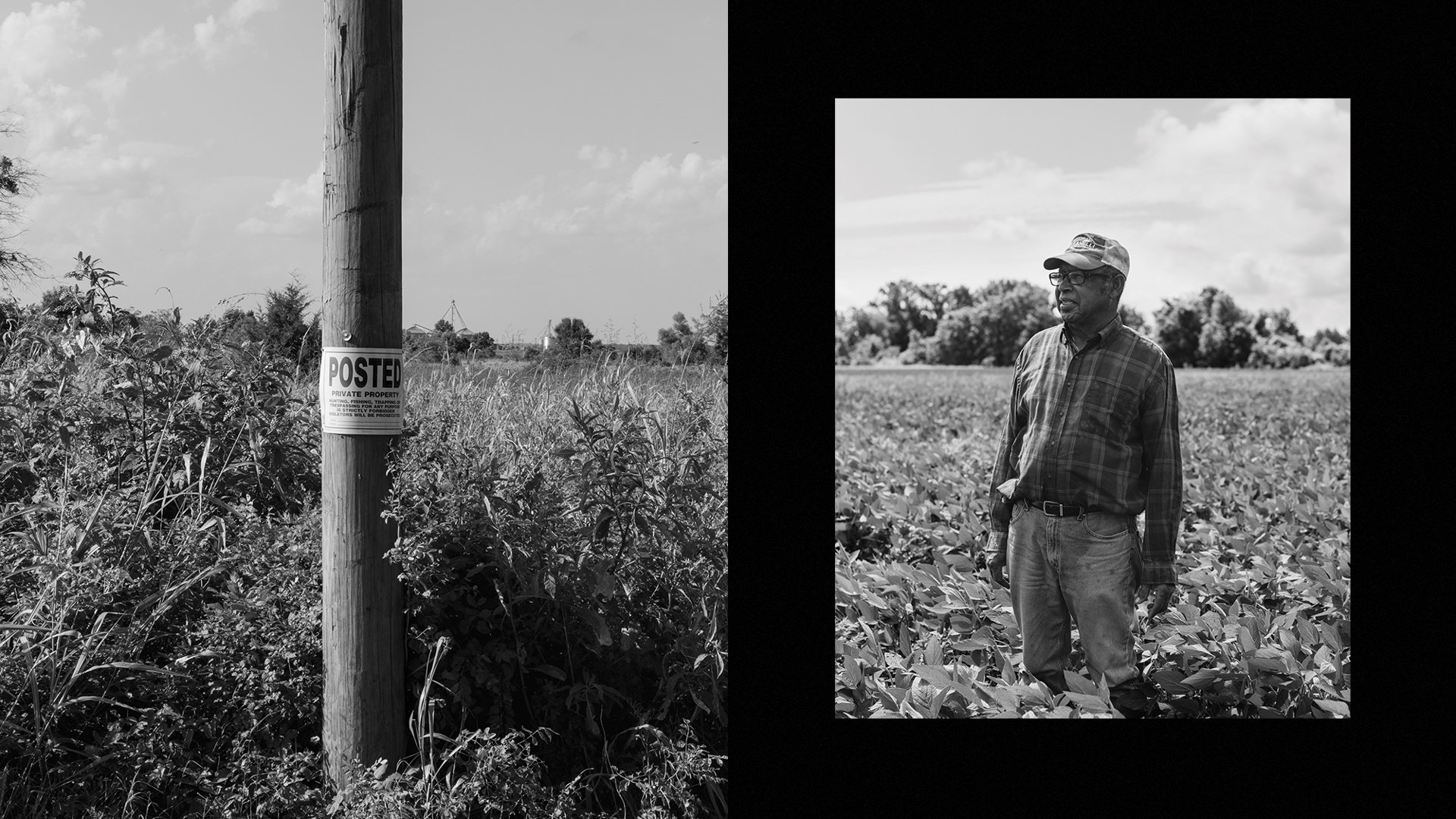 When Keisha Cameron and her husband first started farming their 5 acres of land in Grayson, Georgia, in 2014, they worked the soil with what little they had: their arms, backs, shovels and rakes. They didn’t have the money for fencing or a motorized lawnmower. It took them two days just to cut the grass.

Cameron is the owner of High Hog Farm — a family-based operation that sells herbs, fruits, vegetables, poultry and pork. Last year, she signed up her farm to an online mapping tool created by Leah Penniman of Soul Fire Farm, a community farm in Petersburg, New York, focusing on tackling racism and injustice in the food system. The tool connects U.S. farmers of color who are calling for reparations to organizations and individual donors who pledge to support their work.

Using the tool, Cameron posted a call for a tractor, something she said would be “monumental” for the farm; they are still relying on their push mower and grazing goats and sheep to keep down the weeds. Lack of seed funding for essential equipment, she said, is just one example of how pervasive systemic racism prevents black people from creating profitable farms.

Cameron and her husband bought their property in 2010 and started High Hog Farm a few years later. She has since honed her skills at a Soul Fire Farm training program for farmers of color.

“As a young person, it never occurred to me that you could be a black farmer, which is sad because my grandmother was a gardener and a homesteader,” said Cameron. Her family moved north and separated from the land during the 1970s. When she returned to the South as an adult — moving first to Virginia and then eventually further south around a decade ago — she felt like she was coming home: “It has been very healing.”

Cameron remembers a time when just mentioning reparations would make a person sound radical or militant, but things are changing. “There have been systems and structures put in place to ensure that black people are either excluded [from agriculture] or exploited,” she said. “It’s important that the descendants of those who were enslaved receive some acknowledgment — that we say, ‘these are the harms that have been done.’” 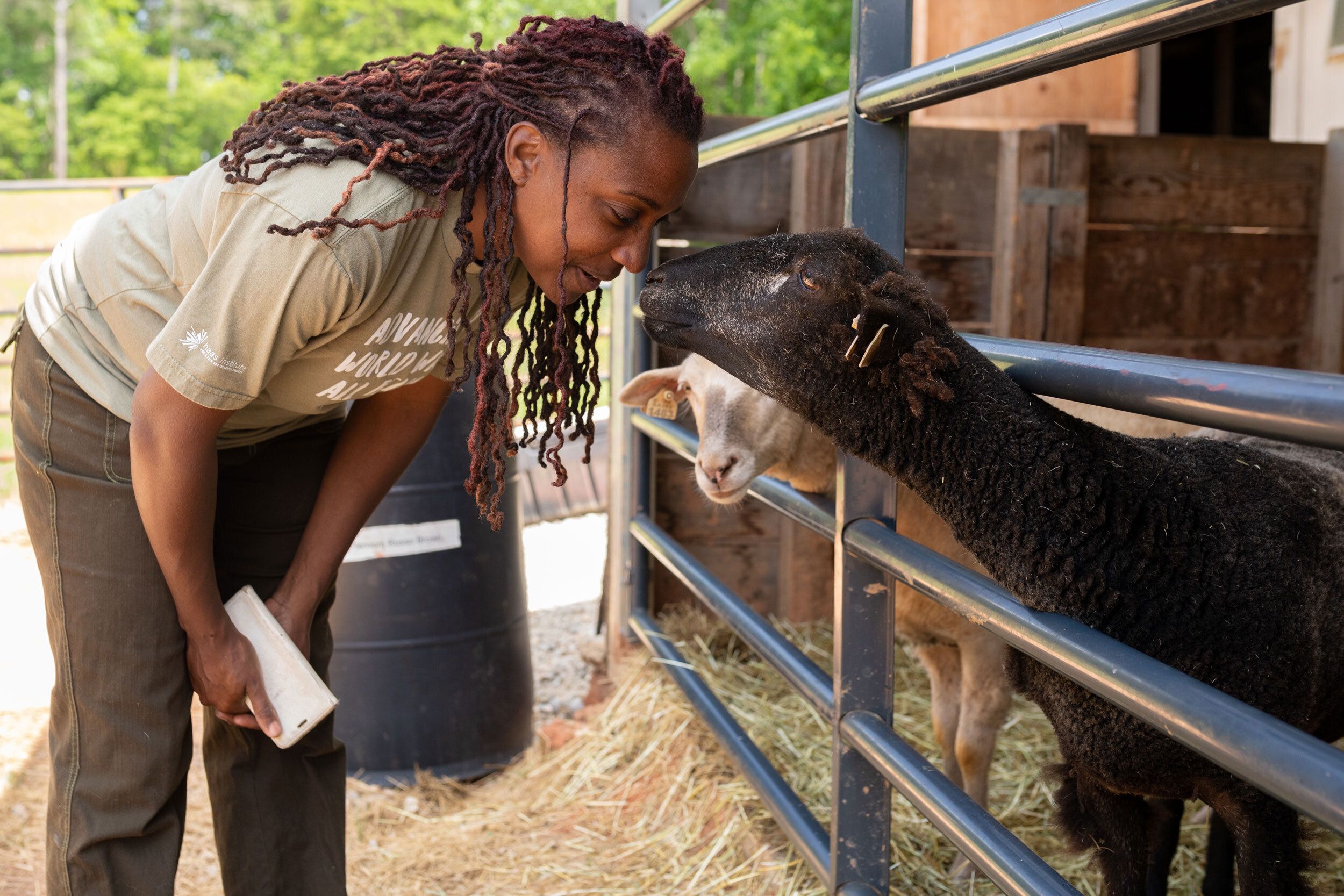 The call for reparations isn’t new; The National Coalition of Blacks for Reparations in America and civil rights activists like Audley Moore have long been on the frontline of the issue. But the idea is gaining profile as a cornerstone of the 2020 presidential primary campaign. A slew of hopefuls – including Sens. Cory Booker (D-N.Y.), Kamala Harris (D-Calif.) and Elizabeth Warren (D-Mass.) – have voiced support for some form of reparations.

The idea behind it is clear: America built wealth and power using slave labor. When slavery was abolished there was no attempt at redress, locking African Americans out of tools of wealth creation, such as land and jobs, and locking them into a system of discrimination.

As a broader national reparations debate plays out, there are calls for the consideration of a more specific population: black farmers.

Black farmers like Cameron make up a tiny fraction of America’s farmers. In 1920, at the peak of post-slavery black farming, there were nearly 950,000 black farmers. That figure has fallen to just 45,500, according to the agriculture census published in 2019, compared to 3.2 million white farmers. Black farmers now make up just 1.3% of the country’s farming population.

Hundreds of years after the end of slavery, and decades after Jim Crow laws, distrust and discrimination continue to stymie black farmers’ presence in the U.S. agriculture industry. They have been systematically pushed out of farm ownership due to prejudice, violence, poverty and a lack of legal protections to help them hold onto their land.

Dara Cooper, co-founder of the National Black Food and Justice Alliance,  points to the Great Migration, where, over the course of much of the 20th century, 6 million black people migrated north from the southern U.S. in search of jobs and to escape intensifying racism. While the move north is often framed as being about a quest for better economic opportunity, it was also about fleeing physical violence, she said: “There was a violence of separation from our identity and our identity is always connected to land…. There needs to be some reckoning with that if we’re even halfway serious about justice.”

Black farmers in the U.S. lost 80% of their land between 1910 and 2007, according to an April report from the think tank Center for American Progress. A big part of the loss, according to the report, can be attributed to the U.S. Department of Agriculture’s refusal to provide loans as part of a “long and well-documented history of discrimination against black farmers.”

This was the focus of the Pigford v. Glickman case, a 1997 class-action lawsuit that alleged that the USDA discriminated against black farmers in its allocation of farm loans and assistance between 1981 and 1996. 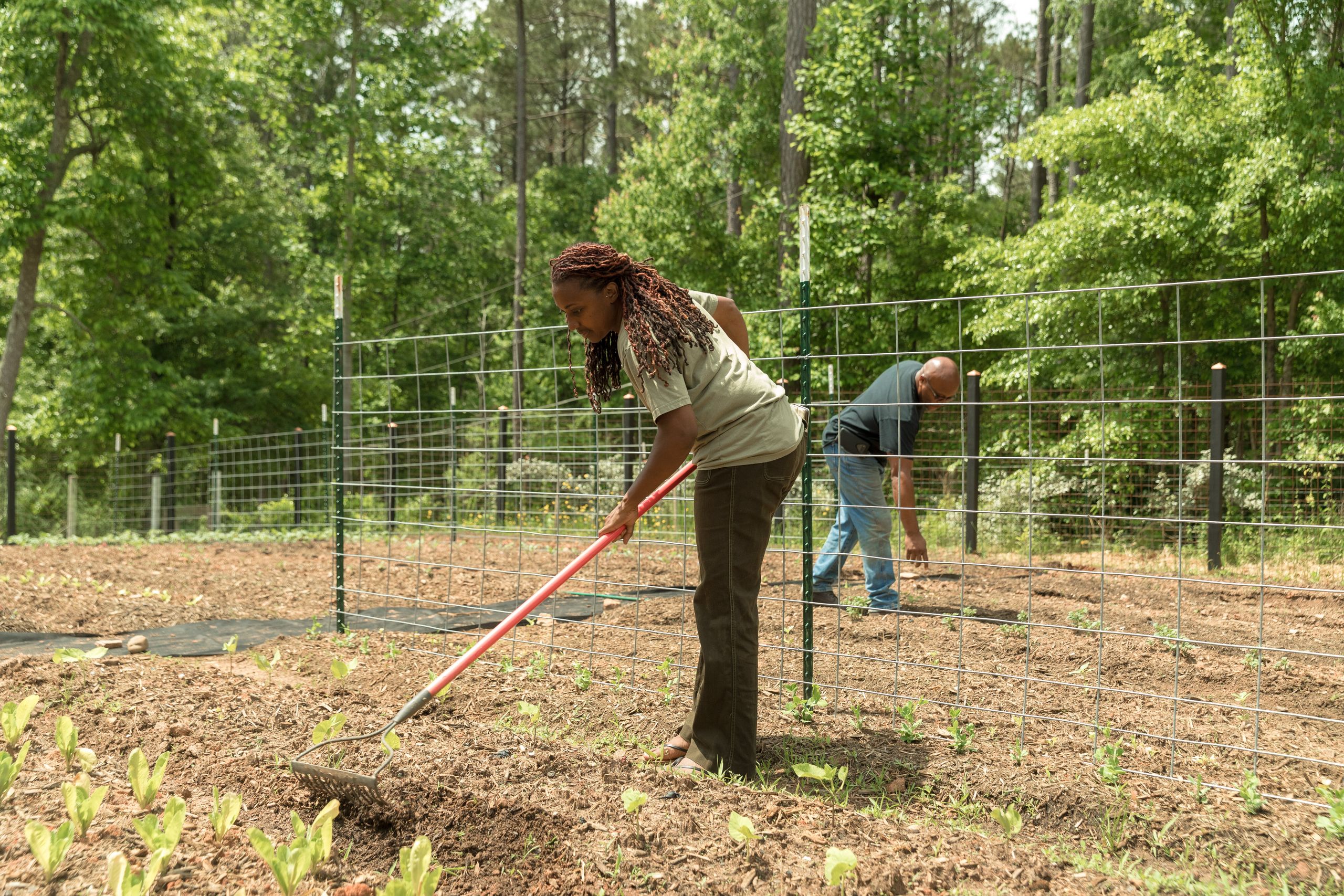 The case was settled in 2010 and allowed black farmers affected (and their descendants) to collect $50,000 each. But food justice advocates, like Cooper, have criticized the long-term impacts of the settlement, saying the lump sum was too small given the continued land loss and the fact that many black farmers had to go into debt in order to continue farming during that time.

The settlement also hasn’t changed the trend of dwindling land ownership among black farmers, said Savi Horne, director of the Land Loss Prevention Project, which focuses on helping black farmers in North Carolina keep their property. “You’re not seeing the more graphic abuse of power by local agents of the USDA. ... but you’re still losing land.”

Land loss and the debate on reparations are intertwined because “who owns the land controls what the political change and shifts will be in localities,” said Horne. The land question must be front and center of reparations, she stressed.

Jillian Hishaw, an attorney and founder and director of F.A.R.M.S., a legal and education nonprofit that provides services to small farmers and rural youth in the Southeast, echoed this. “Handing out a check is not sustainable,” she said. Instead, reparations need to be based on a “wealth-building model” that would help farmers hold onto and expand their land.

While presidential candidates are talking about reparations, no one has offered a real structure to how it might work, Hishaw said. She calls for a reimagining of what they could look like, such as providing stock options and dividend payments that go into a fund that grows over time. She pointed out that part of the reason black farmers lose their land is because they don’t always have legal documents such as wills, deeds, and trusts in place to keep it in the family. 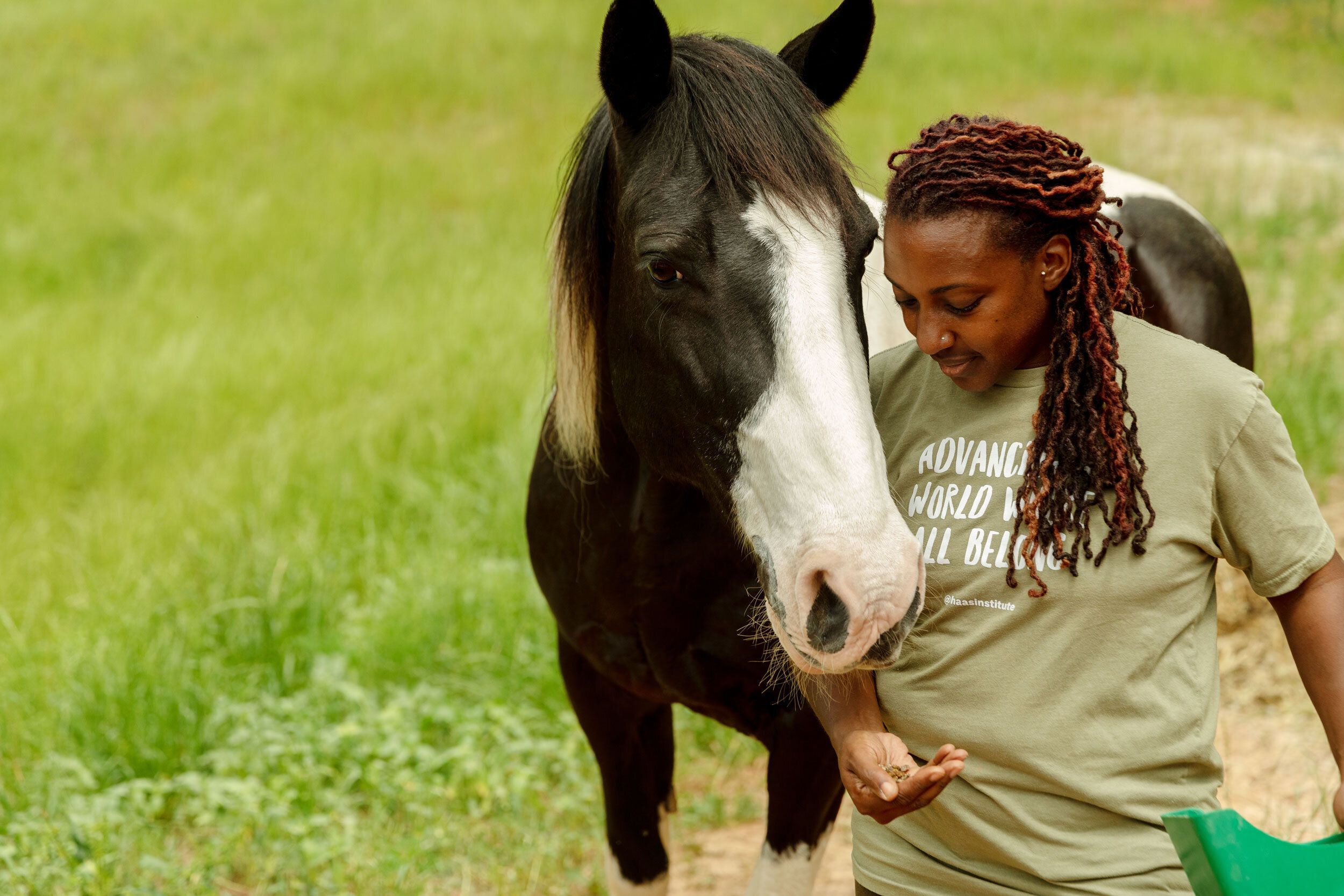 Giving black farmers agency is what Soul Fire Farm’s Penniman hopes to do.  Her reparations mapping tool aims to help guide foundations and individual funders looking to invest in black farmers. But, she told Civil Eats, “it’s not just about money. It’s about power and control. It should be the people who are directly affected who have that power and that control.”

For Cameron, control means giving her three sons, who all work alongside her on the farm, the choice to stay connected to the land. That’s not something many black families can offer to their kids, she said.

Going to conferences and meeting other farmers, Cameron said “I’m surrounded by wonderful [white] people who farm and work the land and I’m aware that their access to structural resources is very different than mine ... Everyone wasn’t given bootstraps or has a family history or a cabinet of bootstraps to pull themselves up with.”

Cameron is determined to stay out of debt while scaling up production. Her husband works full time as an engineer off the farm. She farms full time and also runs training sessions on moving to sustainable and organic practices. Her family has received funding from groups, including the Food Well Alliance and the Southeastern African American Farmers’ Organic Network.

But, she added, she’s still waiting for that tractor.