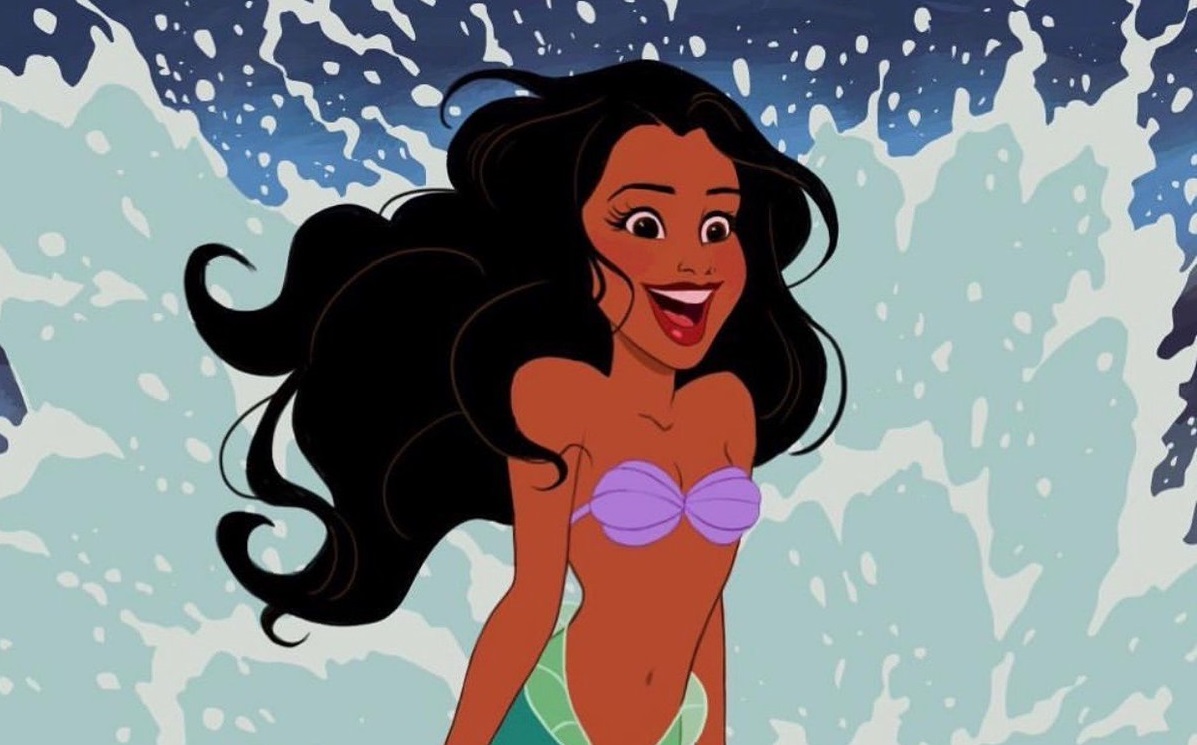 Imagine being a full grown adult and getting mad that a kids' movie isn't being cast the way you want. You'd have to be insane, right? Or just insanely racist. And the controversy surrounding Disney's upcoming remake of "The Little Mermaid" is exactly that.

Disney just announced that Halle Bailey of the singing group Chloe x Halle will play Ariel in a live-action remake of "The Little Mermaid."

Just Announced: Halle Bailey has been cast in the upcoming live-action reimagining of The Little Mermaid. pic.twitter.com/GAUydbkfMV

I mean, have you ever in your life seen someone who looks more like a live-action version of a Disney Princess??

She's also Beyoncé's protegée and has been hard at work on her singing career since she was a child, so she's clearly got the goods.

Still, some people are whining because Halle is Black and the cartoon version of Ariel from 1989 was white-skinned with red hair (and a green tail, because she's a mermaid, and mermaids aren't real and do not belong to any one specific race).

Thanks for ruining my favorite Disney Classic 😭💔 not fair!!!! I was waiting for this movie so bad and not only me, all of the fans 😰 ..She’s beautiful although I don’t know her, but she doesn’t look physically like ARIEL!!! Please don’t mess with the most beautiful classic 🤬

Trolls are attempting to mask their racism with statements like "she doesn't look physically like Ariel," which, again, is insane because Ariel is not a real person you guys. She is a half-fish-half-girl who someone drew in a picture once.

Oh, and, small detail: white people get cast as actual people of color — not fantasy figures who were once drawn as white, but actual people — all the time.

but a black girl playing a FICTIONAL MERMAID is what y’all have a problem with? tf outta here

let me give you some examples

#FilmTwitter, arguing about what a mermaid should look like. pic.twitter.com/oF7D1VF6wL

Yes, grown adults are arguing that mermaids need to look a certain way.

It’s funny seeing all these people about Ariel being black, just wait until they find out that mermaids aren’t real

But Twitter is having a field day roasting all the racists who can't handle a Black person playing a mermaid.

Not sure if it’s anatomically possible for a mermaid, but if Disney could have the live-action Ariel in the “The Little Mermaid” kneel during the national anthem, I’m pretty sure all the most annoying people in America will spontaneously combust.

Some are arguing that it's unlikely Ariel would've survived in her climate as a ginger in the first place.

Fact box: the Little Mermaid lives on a TROPICAL CORAL REEF with a calypso-singing lobster with a strong Jamaican accent. When you think about it, it's bizarre she was white the first time around.

Others point out that if we want to be "historically accurate" about what mermaids would've looked like, the answer is... not cute.

When you think a little further though, UV rays only penetrate water to about 20 feet, so they would probably have evolved pale skin to get enough vitamin D, just as we did in northerly latitudes (assuming a common ancestor!)

I mean, it's science:

Erm sorry but it's not true to the REAL little mermaid unless she's grey, covered in fangs, has a light dangling off her forehead and eventually absorbs the much smaller prince eric into her body until only the tiny, wasted testes remain

So the 1989 version of Ariel was a massive, massive stretch to begin with — not only because she was thin and beige and red-haired humanlike, but also because, oh my god why are we arguing about this mermaids aren't real.

The point, of course, is that any talented actress can play Ariel, regardless of race.

why are people so pressed about halle bailey playing ariel? her voice suits the part so well, she really sounds like a disney princess. y’all really out here getting mad that she’s african american, grow up. she’s going to be amazing. pic.twitter.com/nVjhMvlEbS

And not-that-talented white actors have been playing roles intended for people of color for eons.

Tiana, Mulan and Moana's race are integral to contextualizing their stories and struggles. Ariel's, on the other hand, as a MERMAID, is not. She could literally be played by anyone and it wouldn't impact her story.

Facts are facts: white people don't have a monopoly on mermaid stories.

On the black mermaid drama. I have been told stories about mermaids as child. By my grand-mother & mother, let’s be clear I have never imagined them white until the little mermaid movie. Mermaids stories have existed in the African folklore for millennia.

In fact, it's quite the opposite.

Mermaid folklorist chiming in:
1. This is bloody excellent!
2. Mermaids (sing it with me) aren’t white: Mami Wata from West Africa and Yawkyawks from Australia predate Ariel.
3. The oldest ‘western’ mermaid was Syrian, her name was Atargatis.
4. Mermaids are human constructs! https://t.co/qtz8NZeZVb

But one thing's for sure: the casting suggestion below is actually kind of inspired.

it’s not too late to cast LINDSAY LOHAN as Sebastian pic.twitter.com/m9r992UGzL