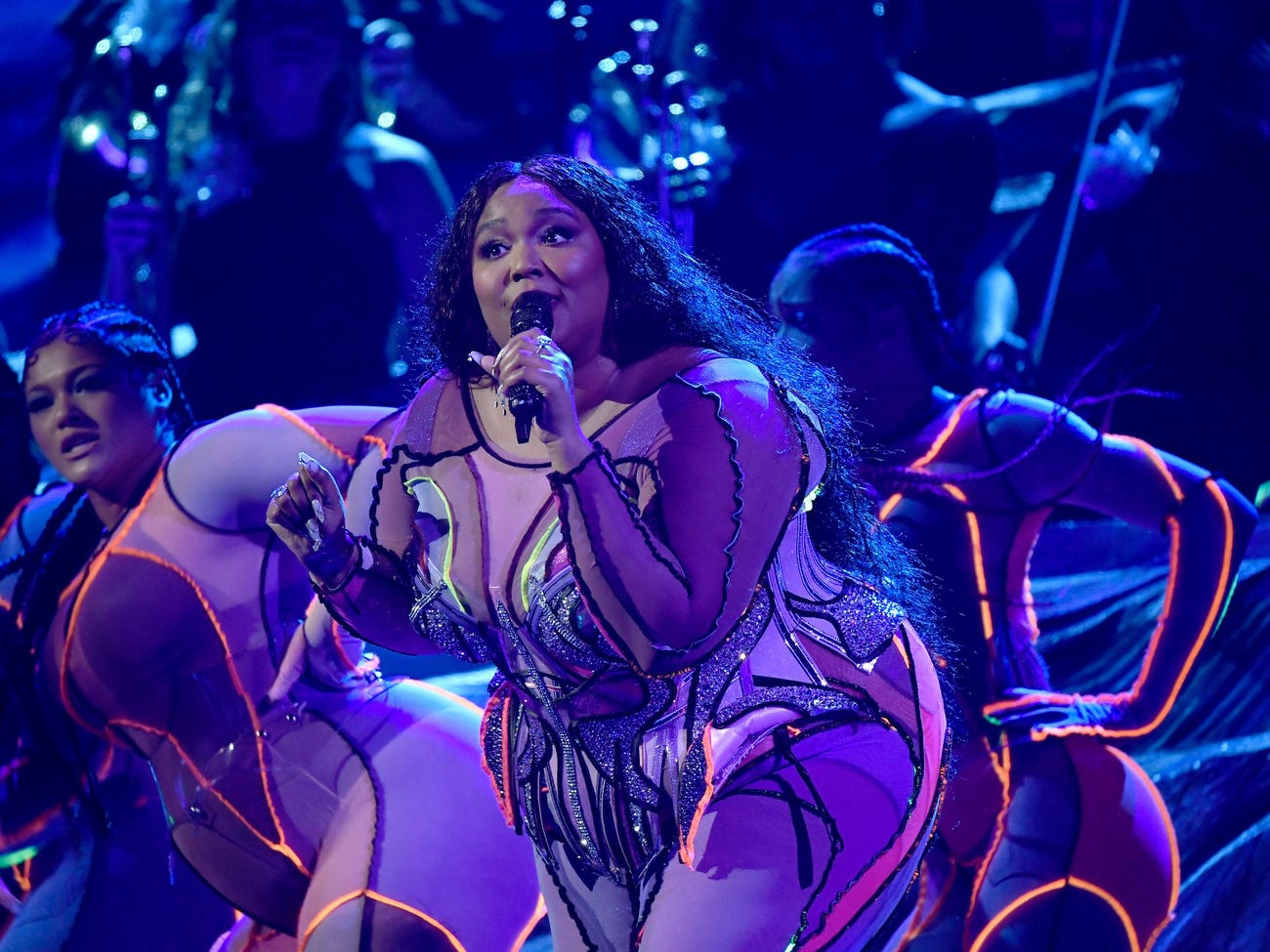 In the midst of Black Lives Matter protests and a huge push for anti-racism reforms, the music industry is attempting to adjust — but so far, its changes have felt empty and performative.

After the relative fiasco of Blackout Tuesday, industry gatekeepers have refocused on a new initiative to signal solidarity with the Black community.

On Wednesday, the Grammy Awards announced that its "urban contemporary" album category will now be called "progressive R&B." The move comes five days after Republic Records announced it would stop using the term "urban" to describe "departments, employee titles, and music genres."

This inconsistent and sudden push to get rid of the term "urban," which has been a prejudicial thorn in the music industry's side for many years, deserves to be met with skepticism.

After all, the Recording Academy didn't vow to induct more people of color as members and voters or denounce its historical lack of Black winners in the four major categories. Why has this massive institution suddenly decided it's time for a change?

The category was the brainchild of producer Ivan Barias, who was the president of The Recording Academy's Philadelphia chapter. He envisioned it as a space to honor "the new breed of R&B artists."

"In the past, people have looked at the name 'urban contemporary' and they automatically think that it has black connotations but it really doesn't," he told Fader in 2017. "It's indicative of a certain musical energy that encompasses all of the diverse genres of urban music."

The category was introduced in 2013. Nominees, according to the Recording Academy's official guidelines, included "albums containing at least 51 percent playing time of newly recorded contemporary vocal tracks derivative of R&B." 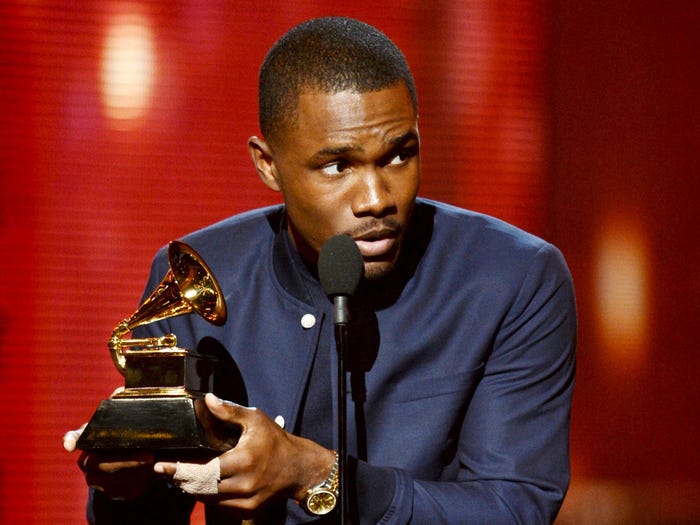 But despite Barias' seemingly noble intentions, the category's first-ever winner also became the first example of its obvious shortcomings.

Frank Ocean won best urban contemporary album in 2013 for "Channel Orange," his studio debut and one of the decade's defining masterpieces.

It's simply inadequate to describe "Channel Orange" as "urban" or "R&B." Its masterful blend of genres and experimental sound is precisely its appeal, and the reason for its enduringly reverent status. It should have won album of the year, easily. Instead, 2013's top award went to Mumford & Sons for "Babel," which isn't even the British folk band's best work.

Indeed, since the category's inception, every single artist nominated for best urban contemporary album has been non-white, and the vast majority are Black.

More frustratingly, the category has continued to reward innovative and boundary-breaking artists that should have been shoo-ins for the ceremony's top prizes.

In 2014, Rihanna's "Unapologetic" won best urban contemporary album, while she was denied recognition in any major category; the album's smash single "Diamonds" wasn't nominated for either song or record of the year.

The Weeknd has won best urban contemporary album twice, for "Beauty Behind the Madness" and "Starboy." The first time, he lost album of the year to Taylor Swift's "1989" (which also beat Kendrick Lamar's best rap album winner "To Pimp a Butterfly"). The second time, he wasn't nominated in any other category. 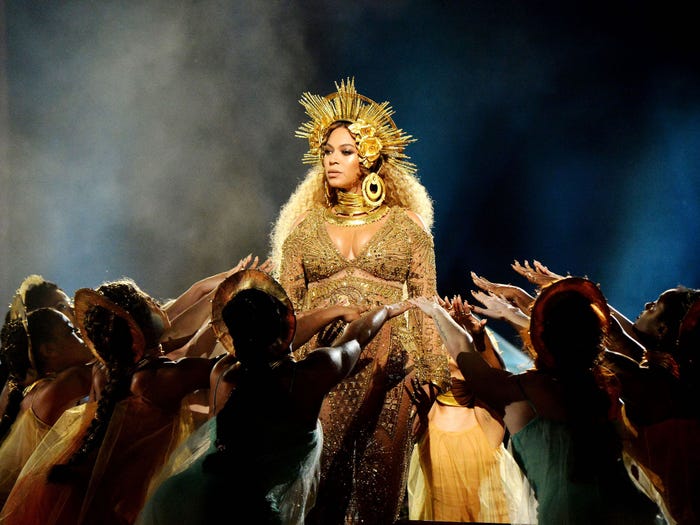 The most infamous example is certainly the 59th annual Grammy Awards in 2017, when Beyoncé's "Lemonade" won best urban contemporary album, but lost album of the year to Adele's "25."

"I can't possibly accept this award. My artist of my life is Beyoncé. And this album for me, the 'Lemonade' album, was just so monumental," Adele said onstage, in lieu of a typical acceptance speech. "So well thought-out and so beautiful and soul-bearing and we all got to see another side to you that you don't always let us see, and we appreciate that. And all us artists here, we f---ing adore you. You are our light."

Beyoncé won two awards that night, but the injustice of the "urban" category became clearer than ever.

The Recording Academy has always had a problem with systematic racism; a Black artist hasn't won album of the year since Herbie Hancock in 2008, and he won for a collection of Joni Mitchell folk covers.

In the 62-year history of the ceremony, only 10 Black artists have won the top prize. Prince never won. Nina Simone never won. Beyoncé, Lamar, Ocean, Rihanna, and Kanye West have all yet to win.

By having a thinly veiled award for "the best Black album that's not strictly rap," it's far too easy for white voters to feel better about themselves, even as they continually spurn iconic Black artists. 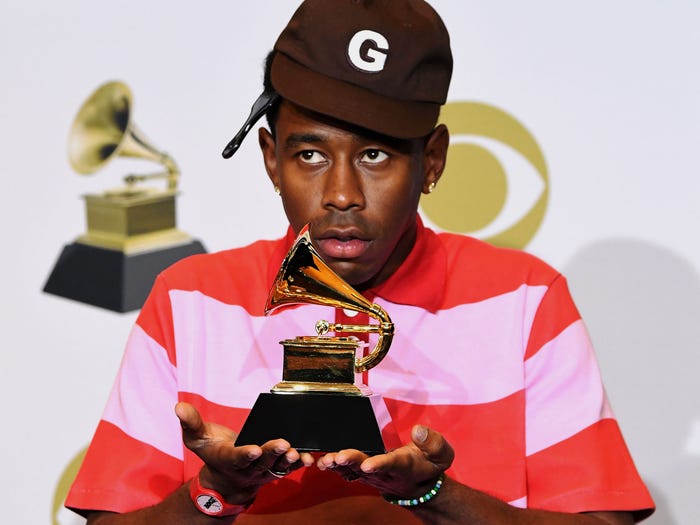 And it's not like people haven't noticed. After winning best rap album at the Grammys in January, Tyler, the Creator blasted the award show for relegating Black artists to specific genres and categories.

"On the one side, I am very grateful that what I made can be acknowledged in a world like this," he told reporters. "But it sucks that whenever we, and I mean guys that look like me, do anything that's genre-bending or anything, they always put it in a rap or urban category."

"And I don't like that 'urban' word," he added. "It's just a politically correct way to say the n-word, to me. So when I hear that, I'm just like, why can't we just be in pop? So I felt like — half of me feels like the rap nomination was a backhanded compliment."

In a recent interview with GQ, five-time Grammy winner Billie Eilish — who has repeatedly cited Tyler, the Creator as an inspiration — said she agrees.

"I have always hated categories," Eilish said. "I hate when people say, 'Oh, you look like "blank." You sound like "blank."' It was such a cool thing Tyler said. I agree with him about that term. Don't judge an artist off the way someone looks or the way someone dresses. Wasn't Lizzo in the Best R&B category that night? I mean, she's more pop than I am."

"Then there's the other side of this whole thing: people shitting on me because I am white. 'Oh, she's white, that's why she won,'" Eilish said. "You know what? I agree with the sentiment; I get why people say that."

While 'urban' is an antiquated term that's best avoided, simply renaming the category is an empty gesture

Rechristening this maligned category "best progressive R&B album" ultimately does nothing to address the root of the issue.

As previously mentioned, the award is already designed to recognize albums with strains of R&B — which, again, is just another too-broad genre used to label multi-faceted Black music.

FKA Twigs, for example, makes transcendent music that combines punk rock, pop, soul, trap, club and even classical influences, but is often described as "alt-R&B." She herself has said the R&B label is used "just because I'm mixed race." Moses Sumney has spoken out about similar limitations. 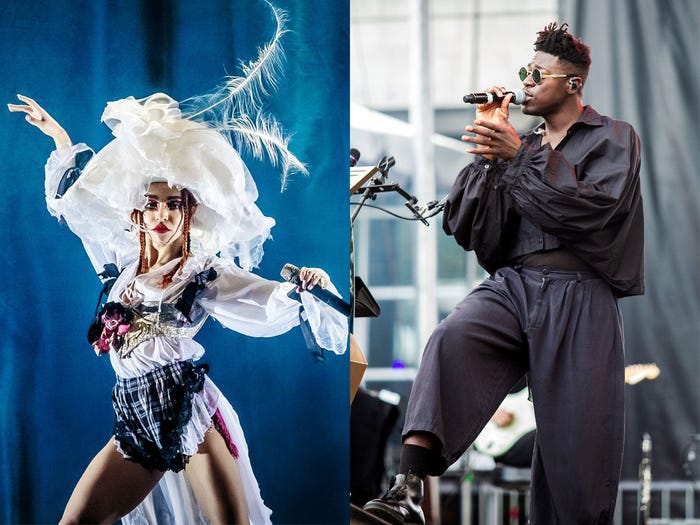 Ocean has put it more bluntly: "If you're a singer and you're black, you're an R&B artist. Period," he told the Quietus back in 2011.

It will be no surprise if the 2021 winner of "best progressive R&B album" is another Black artist whose music is trend-setting and genre-defying, but still passed over for album of the year.

The category will almost certainly still be used to put Black artists in a box and make white voters feel better about not giving them bigger awards.

Might as well call it “What have ‘The Blacks’ been singing about lately?” https://t.co/RbAsS1nVbn

The Recording Academy's decision to finally eschew the term "urban" seems motivated by optics, given the current protests and pushes for racial sensitivity, rather than any real intention to celebrate Black artists in the way they deserve.

As WSJ Magazine's Myles Tanzer notes: "The problem with this category is not its name but it's that every year black artists make groundbreaking music that defies the way the Grammys codify genres and they can't fathom a way to reward it. If the Grammys admit that it would mean admitting that the whole show is bogus."

The problem with this category is not its name but it’s that every year black artists make groundbreaking music that defies the way the Grammys codify genres and they can’t fathom a way to reward it. If the Grammys admit that it would mean admitting that the whole show is bogus. https://t.co/9ouXHbCMrg

I also don't think it's paranoid to point out how the announcement came just six days after Eilish condemned the term "urban," given that Eilish is a very popular white artist whom the Grammys voters apparently adore.

Plus, on top of all that, the Recording Academy isn't even getting rid of the term "urban" altogether.

"At the time that this category amendment proposal was put forth earlier in the year, use of the word 'urban' when classifying certain genres in Latin music was widely accepted," Harvey Mason Jr., Chair & Interim President/CEO of the Recording Academy, told Rolling Stone.

"However, we understand that in the current climate, sentiment might be changing. We are continuing to follow the conversation and are committed to making necessary adjustments."

For Best New Artist, rather than impose a more stringing timeline toward what constitutes “new” they removed it entirely and instead will go with what they “feel” is a breakthrough. So expect more Lizzo and Alessia Cara wins, for example. I think this is bad policy. pic.twitter.com/RGo8gUr9y5

Of course, Republic Records' decision to move away from the term "urban" is similarly empty. Since when has anyone paid attention to the way labels categorize music internally?

If music industry gatekeepers truly care about committing support to the Black community, they can start by issuing a blanket apology to Beyoncé. Then, they can work on paying Black artists more for all the groundbreaking music they will continue to create, and provide retroactive compensation for all the popular and top-selling music they've inspired — which is to say, basically all of it.