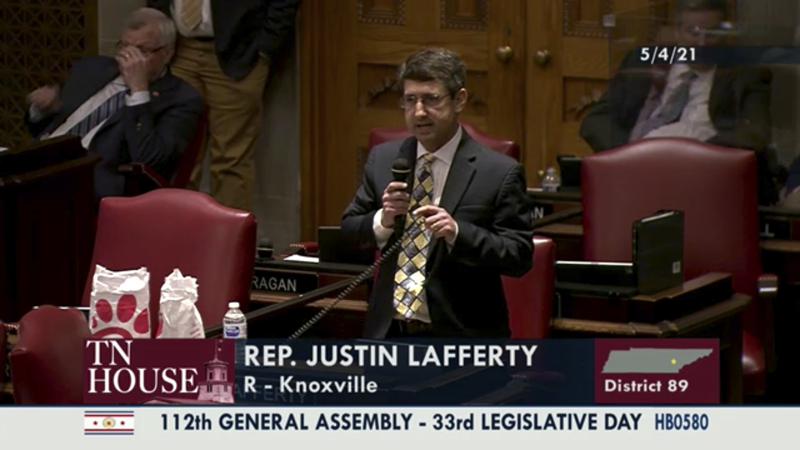 Tennessee state Rep. Justin Lafferty (R) has been fact-checked by historians and accused of trying to distort U.S. history after he argued in a state House floor speech Tuesday that the Three-Fifths Compromise was established “for the purpose of ending slavery.”

The Three-Fifths Compromise was an agreement reached at the nation’s founding that counted slaves as three-fifths of a person when determining a state’s population. Slave states wanted to count their entire enslaved population for representation in Congress, and Northern states did not want them counted at all. The agreement ultimately gave slaveholders outsized representation and influence in government.

“The Three-Fifths Compromise was a direct effort to ensure that Southern states never got the population necessary to continue the practice of slavery everywhere else in the country,” said Lafferty, who is from Knoxville.

He argued that “by limiting the number of population in the count, they specifically limited the number of representatives that would be available in the slaveholding states, and they did it for the purpose of ending slavery.”

It was a “bitter pill” that was necessary to limit the power of slave states, he argued.

Lafferty was speaking in favor of a Republican-backed amendment to a bill that would withhold funding from schools that teach critical race theory, an academic framework that examines how historical racism in the U.S. led to laws and institutions that perpetuate and uphold racial inequities.

It follows a wider effort by Republicans across the country to deny that racism was a key component of the nation’s roots and led to pervasive racial inequities. Conservatives in a number of other states have proposed similar legislation.

TN State Rep. Justin Lafferty (R) claims the three-fifths compromise — counting Black people as less than a person — was included in the Constitution "for the purpose of ending slavery." pic.twitter.com/A6OpfRIwMd

His speech was met with applause from Republican lawmakers.

Several historians weighed in after a clip of Lafferty’s address was shared widely online.

Manisha Sinha, a historian who holds the Draper Chair in American History at the University of Connecticut, told HuffPost in an email that Lafferty’s comments “are completely incorrect and would be discredited by any respectable historian or even a middle schooler who knows American history.”

“It certainly was not an antislavery clause but a pro-slavery one that gave slavery extra protections and recognition in the U.S. Constitution, just like the fugitive slave clause that sought to implement Southern laws of slavery in the North,” Sinha said.

Lafferty was not only whitewashing U.S. history but giving “an alternative history with alternative facts and arguments,” she said.

Sinha called this sort of misconstruction of history dangerous, noting that it can have only bad consequences.

“To propagate such lies is to deny the long history of slavery and racism that we have yet to fully overcome,” she said.

A representative of Lafferty did not immediately respond to HuffPost’s request for comment.

Other historians, including Joanna Freeman, a tenured professor of history and American studies at Yale University; and Kevin M. Levin, a historian, author and history educator; also spoke up to correct Lafferty’s claims.

Levin also noted that “one of the ways you convince Americans that racism and white supremacy is not central to our history is by politicizing and distorting it.”

It didn't help end slavery. Just the opposite. It gave the S outsized representation & helped them preserve slavery & power https://t.co/MLdz37dKw0

The three-fifths compromise made it possible for southern slaveowners to exercise a great deal of influence over the federal government, which in turn strengthened the institution of slavery during the first half of the nineteenth century. #history101 https://t.co/Y2mwyQlQjW

State Rep. Antonio Parkinson, a Democrat from Memphis and the chairman of the Black Caucus, said Lafferty’s comments were alarming, “but the real insult was when the house Republicans clapped for him when he finished his diatribe.”