Fight To Save Black Culture In Gentrifying D.C. Continues After Go-Go Victory 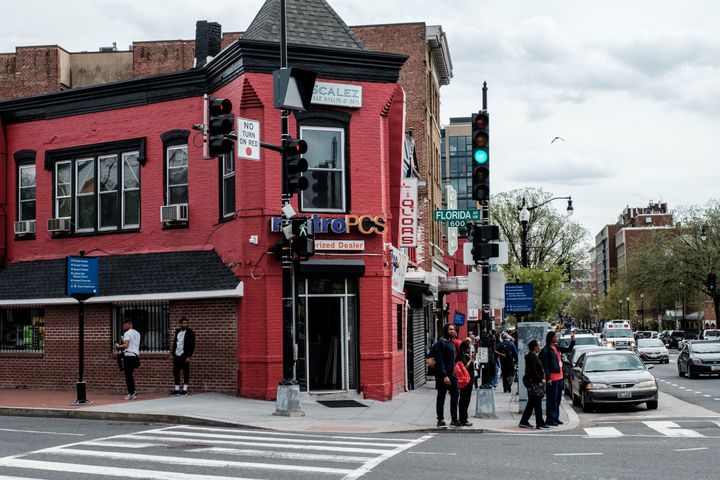 Many people in Washington, D.C., are celebrating a recent successful effort to bring the sounds of go-go, a genre of music rooted in black culture, back to a city intersection. Meanwhile, efforts to protect black culture in a gentrified D.C. continue.

Members of the D.C. community have said this week that they are hoping to build off the momentum of a viral online petition to protect the city’s indigenous go-go music, which combines elements of funk, hip-hop, soul and other styles.

@MotenSpeaks and I just posted this update to our #DontMuteDC go-go petition, which reached 72K signatures! Overjoyed at outpouring of support and especially seeing people take to the streets. Why I love DC. The music is back on, and here's what's next: https://t.co/xZtnMSnroV

Although the music has since returned to the intersection of Georgia and Florida avenues in the Shaw neighborhood ― known for decades as a hub for the sounds of go-go ― Moten and Hopkinson shared an update to the campaign on Friday, noting their ideas for next steps to “empower black businesses and youth and protect black culture,” the petition read.

The initial petition came about after Donald Campbell, the owner of a Metro PCS vendor known as Central Communications, said he was directed by higher-ups at T-Mobile, which acquired Metro PCS, to stop playing go-go music outdoors about a month ago, according to local news outlet DCist. Campbell told the publication that T-Mobile had reportedly received a noise complaint from a resident of a nearby luxury apartment complex.

But Hopkinson, a D.C. resident and author of “Go-Go Live: The Musical Life and Death of a Chocolate City,” told HuffPost that the noise complaint in question is just one example of a larger issue.

“As somebody who lives in the neighborhood, I know that this is a daily occurrence,” she said. “These sort of aggressions, these sort of tensions, are a daily, everyday occurrence.”

She continued: “You’re faced with something that’s different — or maybe you don’t understand ― the instinct is to just to try to get rid of them, erase them, and move on, and continue to march toward whatever D.C. it is that you envisioned in your mind that doesn’t seem to involve black people or black businesses.”

Last month, the National Community Reinvestment Coalition released a study identifying Washington, D.C., as having the highest percentage of gentrifying neighborhoods in the U.S. between 2000 and 2013, with 20,000 black residents displaced.

While we applaud everyone for showing up for #DontMuteDC (we were out there to) we do have some things that must to be said now that we know DC can mobilize thousands by word of mouth. https://t.co/yJ1PAb3gD9

The absence of Campbell’s collection of go-go music, which he has been cranking at that intersection since 1995, sparked outrage among residents who argued that the removal was yet another symbol of how gentrification often strips away black culture in D.C., once affectionately known as the “Chocolate City.”

Campbell told The Washington Post that he has remained in compliance with noise ordinance laws despite an increase in complaints in recent years.

And although at least one D.C. native and former Howard University student, Anita Norman, who is the area’s Advisory Neighborhood Commission representative, told DCist that the go-go music has played at an “excessive volume,” she has also acknowledged that the volumes have remained in compliance ― as D.C. elected officials have also stated.

In the days following a Howard University student’s tweet about the absence of go-go music at the Shaw intersection on April 7, community members organized music celebrations and a number of demonstrations in support of Central Communications, using the hashtag #DontMuteDC to promote the protests on Twitter.

As DCist reported, groups collaborated on Monday to organize an “Emergency Go-Go Protest” rally at the storefront, which is located on a block called “Chuck Brown Way,” named after the “Godfather of Go-Go” Chuck Brown.

I’m not a fan of gogo but the dudes down at Metro PCS on Georgia have stopped playing their music. Apparently, the new yt neighbors were complaining about the “noise”. Simply saying gentrification is sickening is an understatement.

The demonstrations built traction throughout the city; Moten and Hopkinson’s petition has since garnered more than 75,000 signatures, with the support of D.C. elected officials, including Mayor Muriel Bowser, Ward 1 Councilmember Brianne K. Nadeau and at-large Councilmember Robert C. White Jr.

#DontMuteDC I'm in touch with @TMobile to inform them of the important history of this corner. See my letter to them: pic.twitter.com/FHOlmoDzGV

On Wednesday, T-Mobile CEO John Legere responded to the backlash, tweeting that the “music will go on.”

“I’ve looked into this issue myself and the music should NOT stop in D.C.!” he wrote. “@TMobile and @MetroByTMobile are proud to be part of the Shaw community ― the music will go on and our dealer will work with the neighbors to compromise volume.”

Crowds gathered Wednesday to celebrate T-Mobile’s announcement and the days of successful demonstrations outside Central Communications, Moten told HuffPost. The announcement was made ahead of a press conference community activists had scheduled that same day, he added.

Hopkinson told HuffPost that while it’s important to “celebrate and honor” what the community has accomplished at the intersection of Florida and Georgia avenues, there’s still work to be done, including building support for black businesses and the fight against mass incarceration.

“What happened was really big and really important,” she said. “Hopefully people got educated, but the work is not over. I would not declare a victory, there’s a lot of work.”

Moten added, “It’s our job to convey that the victory is putting a structure in place to deal with gentrification.”