Dwyane Wade turned his final NBA game into a celebration 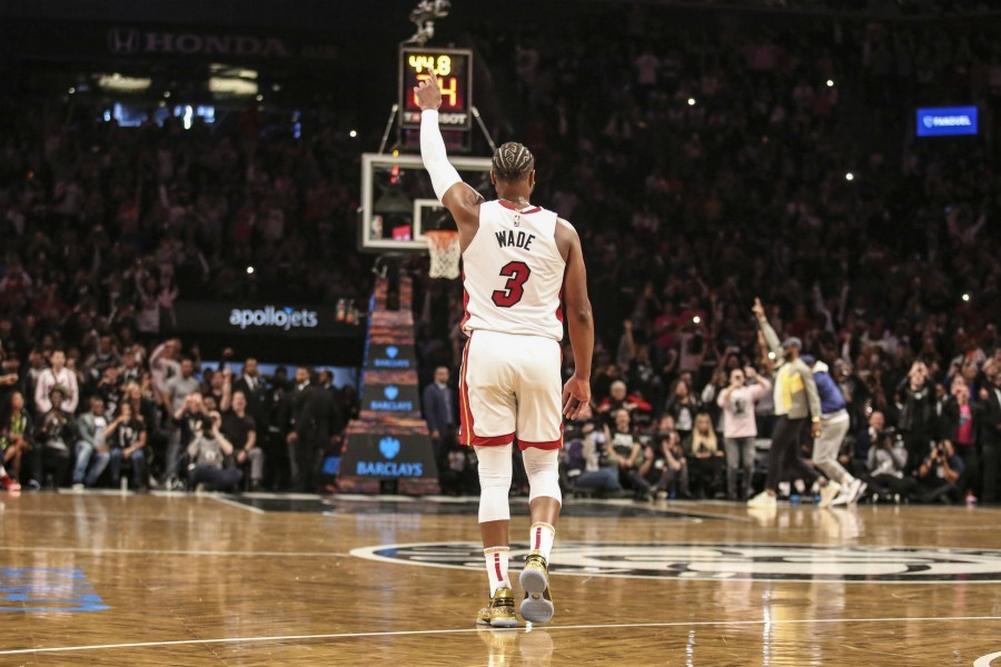 At first, Justise Winslow just smiled, staring at himself -- "THE STUDENT" -- and Dwyane Wade -- "THE MENTOR" -- on the cover of Sports Illustrated from October 2015. In the visiting locker room at Barclays Center on Wednesday, after the final game of Dwyane Wade's NBA career, the 23-year-old forward was at a loss for words. Then the words came streaming out.

"Unselfishness," Winslow said to CBS Sports. "Leadership. Something bigger than you. Humility. Throwback." He laughed. "In the moment, that was cool. Yesterday, it was cool. But tomorrow, that's going to be really cool."

In that cover story, written by Lee Jenkins, Wade says that part of his job is passing down knowledge. There is a scene where he and Winslow are on the court, working on post moves, and Wade is talking to him about leading with his hips instead of his shoulders to avoid picking up fouls. It also revealed that Wade invited Winslow to his house for lunch as soon as the rookie got to Miami.

"It was like the third place I went to," Winslow said in Brooklyn. "I went to the hotel, I went to the arena, then I went to D-Wade's house. That just shows you the type of person he is. He was super inviting. I was supposed to be that guy coming in and the next kind of D-Wade, the next leader, the next guy for the Heat. He accepted that. He, really, he kind of wanted that, you know? He wanted that for me. A lot of guys, it would be like, 'It's still my team, it's still me.' But he was inviting. He was accepting."

Winslow said all this wearing a suit with gold stars all over it. It was Wade's last dance, so the Heat dressed like they were going to prom. Decked out in their flashy attire, they posed for a team photo more than two hours before tip-off. Winslow, however, went the extra mile -- he had Wade's high school and college jerseys stitched into his jacket lining.

"That's the big bro," Winslow said. "I wouldn't be the player I am, the person I am without him, so any way I can kind of let him know non-verbally what he means to me, I'm sure it'll go a long way. But the biggest way I can say thank you is taking everything from him and making that next leap, keep making those steps with my game and my leadership and this organization. I'm going to tell him, 'Thank you,' but the biggest way I can tell him thank you is to become that player." 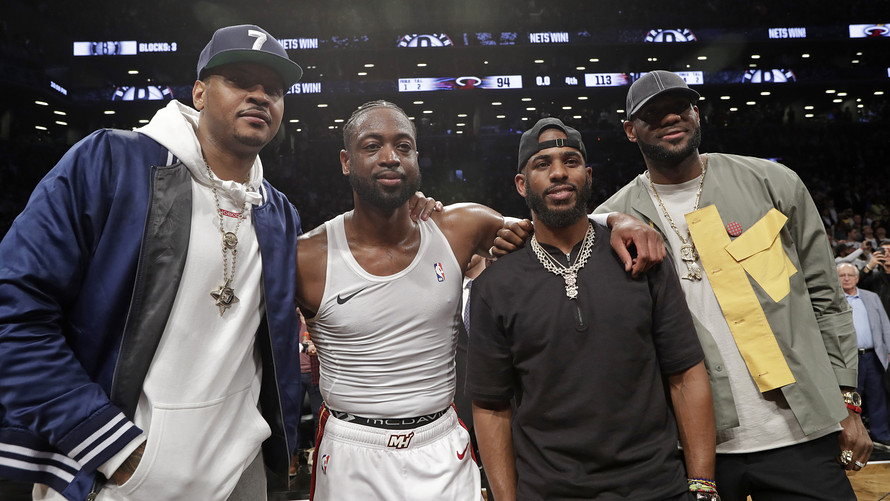 In his time with Wade, Winslow has learned lots of lessons. Even though they'll no longer be teammates, he said that he wants more of them, too. The stuff that will stick with him, though, is not a product of forced, formal teaching. "The spontaneous moments," he said, are the ones that mean the most.

"The casual conversations on the plane. The little pointers on the bench. Those things."

At the end of the 2007-08 season, Pat Riley stepped down as coach of the Heat and handed the reins to 37-year-old Erik Spoelstra. Spoelstra had been with the team since 1995, working his way up from cutting tape in a windowless room they called the Dungeon to being Riley's lead assistant. He had big shoes to fill, but Wade helped him get comfortable in them.

"Literally, he was the first guy to contact me," Spoelstra said. "And gave me a reassurance and confidence that I was capable of doing that job. Only a great player, even as young as he was, can have that kind of impact. Because it was my first head coaching job, and I was a little unsure."

Spoelstra called Wade "a very giving guy, just by his nature." He said the future Hall of Famer could average 20 points for the next two or three years if he wanted to, but agreed to come of the bench in his final season because he didn't want to stunt the growth of Miami's young players. In September, the two of them had a four-hour lunch and talked about what his final season would look like. It is not easy to do something as grandiose as this without alienating your teammates and making the entire season about you, but, in Spoelstra's view, Wade "did that brilliantly."

"This was about the team," Spoelstra said. "He was breathing life into the young players, creating a new generation of Miami Heat players with our young guys, that with his guidance, they took on another level as well. I cherish that. I didn't look at it like the cliche of, 'Oh, I have to coach an aging superstar.' Is that what they call it, quote-unquote? I viewed it as, man, I get another year to coach Dwyane Wade, a friend of mine."

Spoelstra has watched Wade dispense advice and set a good example. He remembers how his own confidence "went through the roof" 11 years ago, as he prepared to step into the spotlight. This is part of why, if Wade ever wants to come back and practice with the Heat, Spoelstra will have a practice jersey waiting. He believes that the organization will benefit from Wade's continued involvement, regardless of what role he is in.

Heat players aren't even the only ones Wade lifts up. Nets guard D'Angelo Russellconsiders Wade a role model and proudly swapped jerseys with him after a game in March. On Wednesday, Russell left the arena wearing that jersey.

"He's always been a guy that shares the game," Spoelstra said. "He wants to celebrate other people's success. He's an ambassador to the game. He wants the game to grow. He wants to see other guys successful, young guys coming in, and be able to impart some wisdom. Or, sometimes, a lot of times, it's confidence. And belief. And when you have that guy infusing that, I can speak to that. You feel like you can accomplish anything." 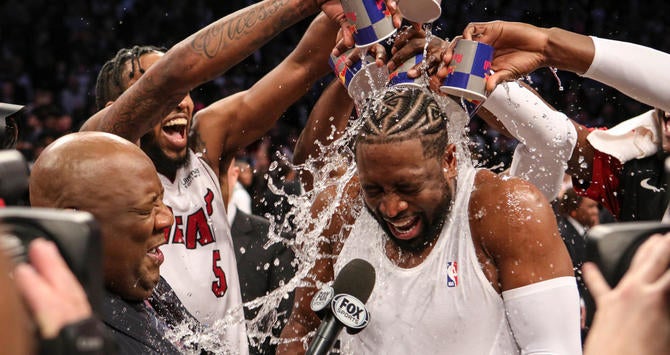 Wade went out with a 25-point, 11-rebound, 10-assist triple-double, but the feat itself wasn't as meaningful as how he achieved it. Near the end of the third quarter, everybody in the building knew he was an assist short. It felt inevitable, but it was unclear how long it would take or who would make the shot.

"I was hoping it would be me," Udonis Haslem told CBS Sports.

Haslem and Wade both joined the Heat in 2003. Haslem remembers how confident and poised Wade was as a young man, how he played like a veteran when they won their first of three championships together in 2006. They are closer than brothers. They first talked about retiring together after their second, in 2012, but Haslem has not officially made his decision about that. Wade told him to keep playing if he wants to, and said that he was grateful to be able to end his career with Haslem at his side.

"I'm not standing up here as an accomplished athlete as I am on paper without him," Wade said. "And without what he brought to our organization and what he brought to me on the court. A different kind of toughness. And an inspiration. I'm so appreciative to that guy. He doesn't get enough credit, but I try to always pump it into him and let him know that, you see Dwyane Wade's name, Udonis' name is not far behind it."

Spoelstra started them together and said it felt like getting in a time machine. Wade knew exactly what he was doing when he brought the ball down the court.

Before Haslem even released his midrange jumper, he saw Wade raising his hand in celebration, walking the other way.

"I didn't need more pressure," Haslem said. "I felt like it was a game-winner."

Wade didn't even see it go in, but the roar of the crowd meant he didn't have to. All night, this felt more like a commemoration than a basketball game, one last opportunity for Wade to put on a show. For all the fans in Wade jerseys -- and the number of them was staggering -- it did not matter that Brooklyn won 113-94. He knew it was all about him, but he made it about Haslem, too.