At first glance, it’s easy to dismiss Mrs. America, FX’s nine-part series tackling the women’s movement of the 1970s, as not being for us. It stars Cate Blanchett, Rose Byrne, Elizabeth Banks, Sarah Paulson, Jeanne Tripplehorn, and Tracey Ullman for starters — all White. But Mrs. America also features Uzo Aduba as political icon Shirley Chisholm and Niecy Nash as brash attorney Flo Kennedy. Historically speaking, given the focus on why conservative special interest leader Phyllis Schlafly, superbly portrayed by Blanchett, led the countermovement successfully stonewalling the Equal Rights Amendment, the series has plenty of interesting takeaways. After all, women’s rights, particularly the call for equal pay for equal work, is important history for women of all races.

While Chisholm — the first Black woman elected to congress — stands among the female titans in the series, Mrs. America’s rendering of Black women’s participation in this movement is not sugarcoated in the slightest. Telling the truth means also revealing how peripheral many women of color were to what many call a White woman’s movement, and the series even shows moments where the golden girls themselves are oblivious to how they practice this racial exclusion.

It’s reasonable to assume that these moments of intersectionality focused on race, gender, and class are largely attributable to the presence of acclaimed playwright Tanya Barfield, who serves as a writer and producer for Mrs. America. We also can assume that groundbreaking British director Amma Asante, best known for her breakout 2013 feature film Belle starring Gugu Mbatha-Raw as biracial 18th-century royal Dido Belle, plays a pivotal role bringing these issues to the fore. Asante directed episodes three and four of the series — the very ones where the story arc focuses on Chisholm and The Feminine Mystique trailblazing author Betty Friedan, brought to life by British comedic legend Ullman.

Asante spoke exclusively with BCA via phone from her native England about her involvement in the series, her approach to the critical Shirley Chisholm episode, highlighting those moments of exclusion common to the experience of Black women and all women of color, and why Mrs. America resonates with her, a British woman of Ghanaian descent.

BCA: How did you get involved in Mrs. America?

Amma Asante: Coco Francini and Stacey Sher, two producers on the show, sent a version of the first two scripts just to see what my feeling was about them. I have not done very much American TV or, actually, TV in general. I’d not so long come off of just doing two episodes of The Handmaid’s Tale. Once I read the first two episodes, I was intrigued. I sat with them on a phone call and we talked a lot about stuff I did know, and stuff I didn’t know with regards to the women’s movement. What I found really interesting was that this was a story from many points of view, [and] one that was focused on a different woman for each episode. I knew that they were going to do an episode around Chisholm. I said, ‘Well if you ask me to do this, then we have to talk about me doing the Shirley Chisholm episode because that’s the thing that will really seal the deal for me in terms of coming on board,’ and that’s what happened.

What was your approach to the Shirley Chisholm episode?

The approach, which is, you know, how I approach any performance and any performer in any story that I’m trying to tell, is to really sit down with the actor whose character’s gaze we’re seeing the world through at that time, and really go through how human we can make them.

Uzo Aduba is so good at capturing Chisholm’s conviction and integrity.

Obviously, there was a lot of studying that went on of Shirley, and the conversations were endless. But, also, one thing that we talked about a lot were particular lines. When Uzo was going to utter those lines by Shirley Chisholm, we knew that we wanted her to utter them, yes, as Shirley Chisholm, but also to utter them for every woman, particularly the woman of color, who walks that pathway or intersection or might have been in those situations [of being challenged or doubted that Shirley Chisholm finds herself in] before. 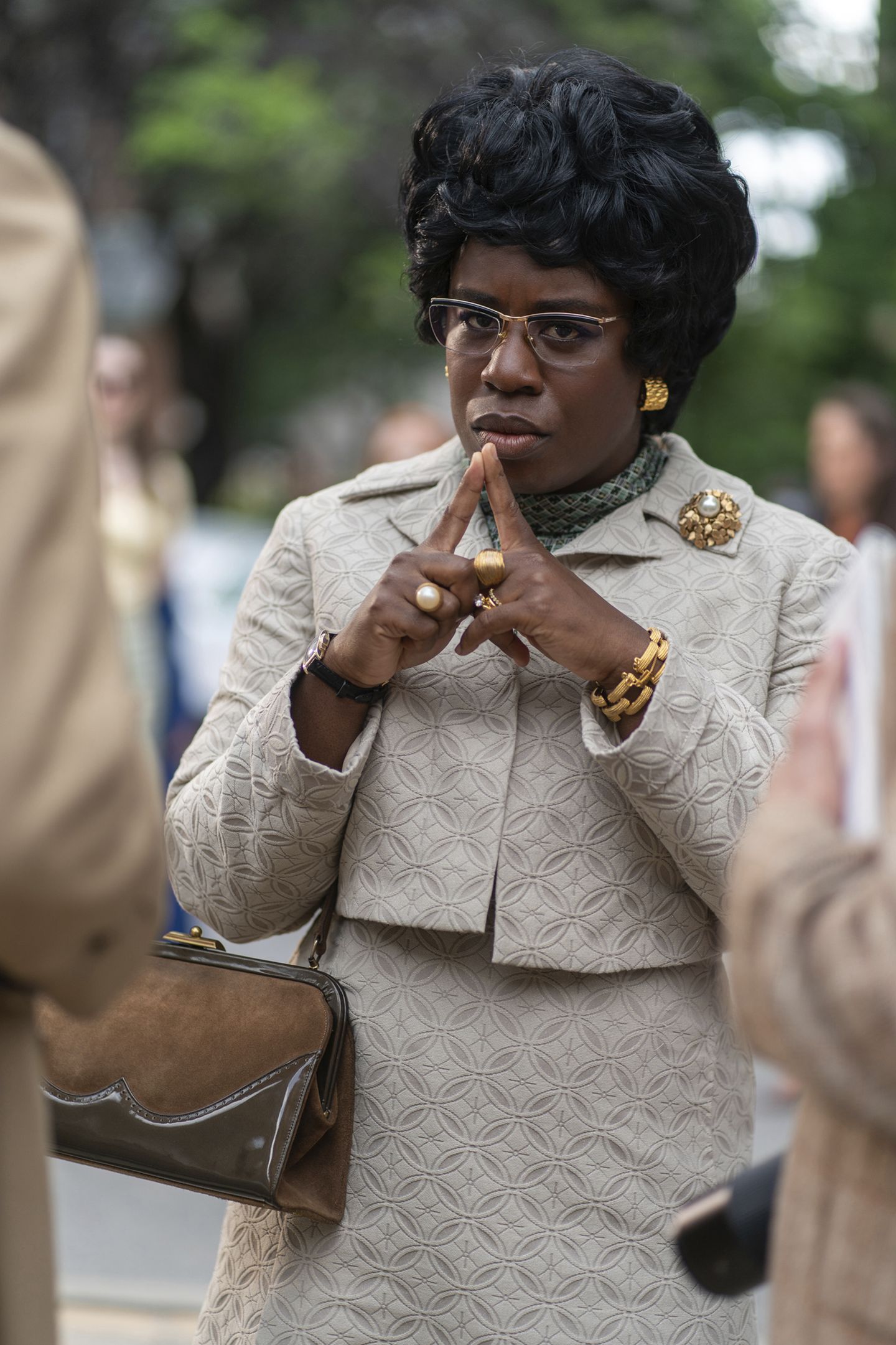 So, there’s a moment in the episode where Aduba [as Chisholm] turns around and says to some of the women of the movement, in particular Bella Abzug, [who wants Chisholm to change her mind] and [says something like]: ‘I don’t wait for my parents’ permission. I’ve never waited for anybody’s permission to tell me what I can and cannot do. And you’re not my parents, and I didn’t wait for them to give me permission either.’

One of the things Mrs. America captures, and especially your two episodes, is that Black women weren’t completely comfortable and seen at this time. But it’s done subtly, not through speeches, but, instead, that discomfort is visible on-screen.

Right, and, in one particular moment [in episode four, “Betty”], the actress Bria Samoné Henderson, who’s playing Margaret Sloan [one of the first editors at the trailblazing feminist magazine, Ms., which Gloria Steinem co-founded and served as first] is sitting, pitching ideas for magazine pieces, and you definitely get what I think is a really recognizable experience for many of us as Black women… We’re kind of at the table but don’t really have a voice. Or we have a voice but is it really being heard when we speak? And, also, when we’re there and we’re often the only one, is it even safe to speak? I think Mrs. America does what so many historic pieces do and what, obviously, we’ve tried to do with my films as well, which is, and I say it all the time, show how far we’ve come and show how far we still have to go.

Mrs. America is such an American story. As a British woman of Ghanaian descent, how does this resonate with you and other women abroad?

I think it resonates hugely… we know about Gloria [Steinem], and within the Black British world, we know about Shirley Chisholm, and Chisholm’s family is from the Caribbean. We had a women’s movement in the U.K. that very much overlapped with the women’s movement of the U.S… I think, you know, ideas of what it is to be free in your own skin, what it is to be defined by gender, they resonate worldwide. My mother was born in Ghana and, and she was a savvy, savvy businesswoman and she came from a farming family. But, even within the context of a farming family, those women, they worked, and they worked, and they raised children. They were strong women who had to navigate the vulnerabilities, if you like, that society placed upon them in order to be and to get to where they wanted to get to. And many of the questions that American women would have asked themselves in the early ’70s, and ’80s and beyond are the same questions my mom was asking herself when she was running a business and raising her kids in Britain, from Ghana.

Mrs. America is streaming exclusively on Hulu, with new episodes dropping every Wednesday until May 27.