Detectives have reviewed camera surveillance at stores in hopes of finding images of who bought the rope used in a reported attack on “Empire” actor Jussie Smollettlate last month, according to Chicago police.

Chief police spokesman Anthony Guglielmi said the move is part of a broadening of the investigation. “Detectives have reviewed surveillance videos of the hotels in the area, traffic cameras and of retailers that may have sold the rope,’’ he said.

The rope Smollett said was used in the attack was rope with the thickness of a clothes or laundry line.

No arrests have been made and police still have not located or identified two “persons of interest” whose pictures were circulated by police, Guglielmi said.

Smollett — who is black and openly gay — said he had just left a Subway shop in the Streeterville neighborhood in the early morning hours of Jan. 29 and was walking to his apartment when two men walked up, yelled slurs, hit him and wrapped a rope around his neck while yelling, “This is MAGA country!”

A chemical — maybe bleach — was poured on him, police said.

A week earlier, on Jan. 22, witnesses told police a postal worker dropped off a letter at the studio where the show “Empire” is filmed. It was postmarked in southwest suburban Bedford Park on Jan. 18, and bore two American flag stamps. The letters MAGA were written, also in red ink, in the upper-left corner of the envelope.

Police have not said whether they believe the two incidents are related, and so far they are being investigated separately: the letter by the FBI and the alleged attack by Chicago police.

No progress has been reported on the letter and very little on the reported attack. Chicago police Superintendent Eddie Johnson said Feb. 1 that detectives were “making gains” and he hoped there would a “successful resolution soon.” He offered no details.

Detectives have been able to track stretches of Smollett’s walk between the Subway shop and his apartment building and have found video of two other people in the area at the time. But the images are dark and blurry. 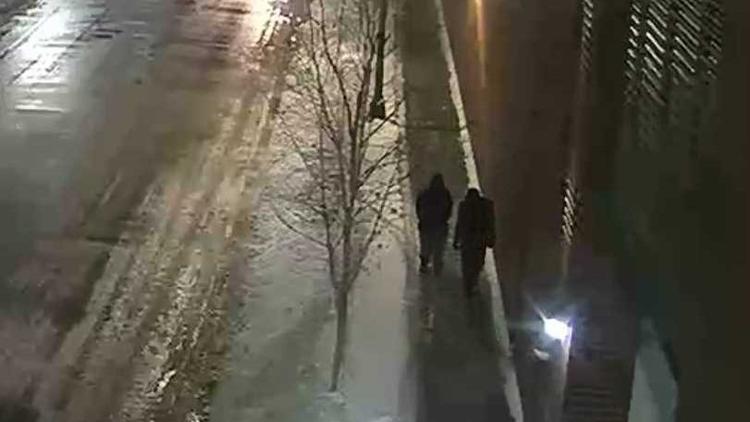 Detectives are seeking to identify and interview the two people in the picture above to determine whether they may have had any involvement in or witnessed the reported incident. (Chicago Police)

Smollett has told police he was on the phone at the time with his music manager, who says he heard the slurs and a scuffle. But both of them have so far declined to hand over their cellphones to detectives.

“Empire,” which premiered on the Fox network in 2015, is a musical drama that films in Chicago for most of the year. The series stars Terrence Howard, Taraji P. Henson and Bryshere Gray. Smollett plays a gay musician.

Anyone with information is asked to contact Area Central detectives at 312-747-8380 or report it anonymously to cpdtip.com.