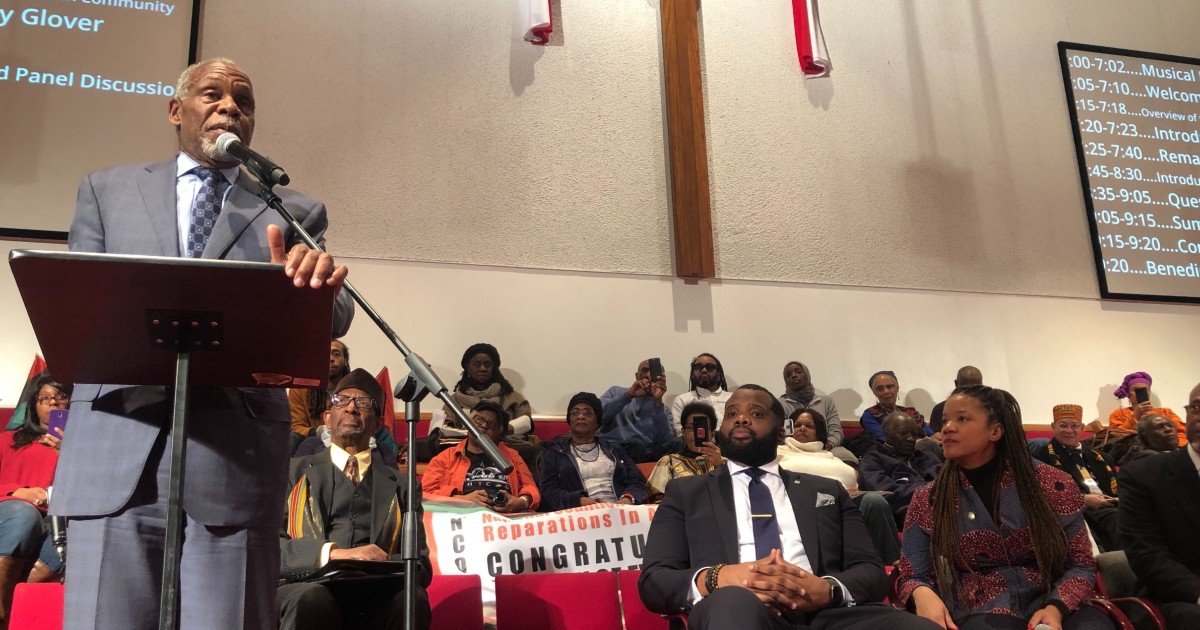 Hundreds of Evanston residents packed the sanctuary of First Church of God Wednesday evening to participate in a town hall discussion on the next steps in the city’s landmark reparations fund initiative.

Evanston City Council passed a measure last month that will funnel the city’s tax revenue generated from the sale of recreational marijuana to a local reparations fund. The move has attracted attention from national and regional groups that have long advocated for investment in black communities through reparations.

“Tonight is definitely the best first start that I can imagine,” said Pastor Michael Nabors of Second Baptist Church and president of the Evanston/North Shore NAACP. 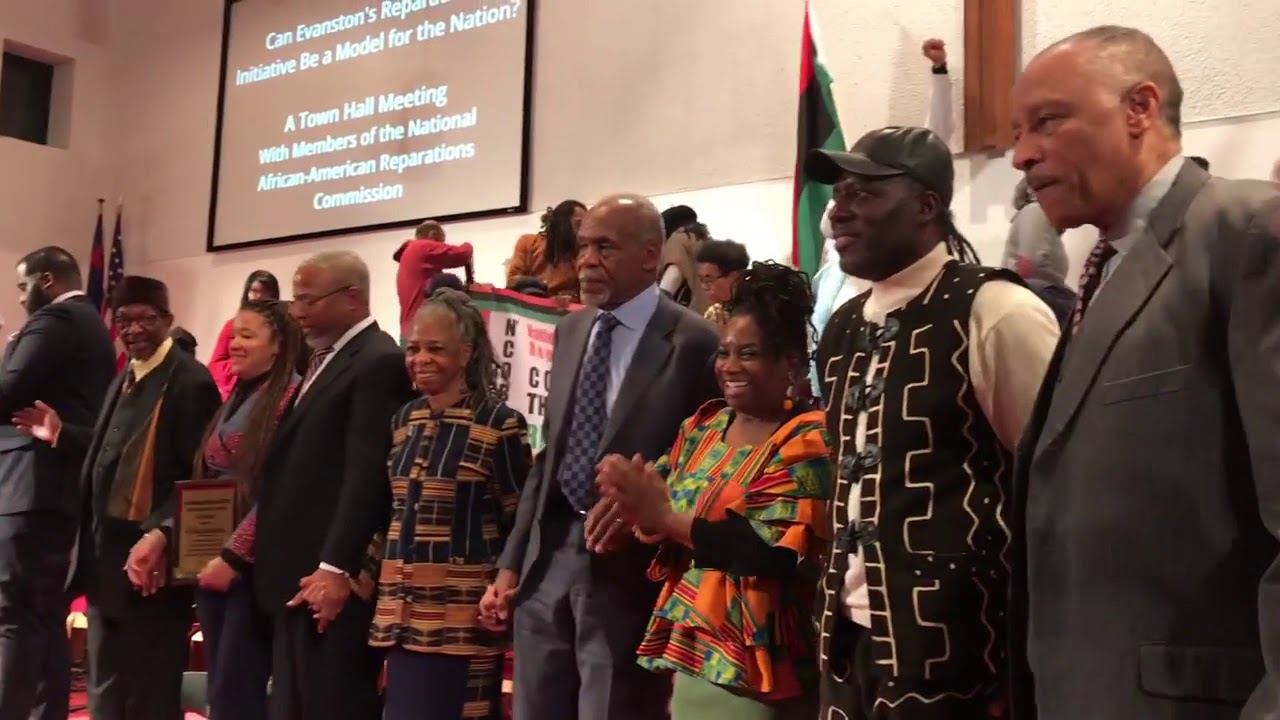 He was one of the panelists who spoke before the packed sanctuary with a capacity of 750 people. Guests hugged friends and family, posed for photos and gave actor Danny Glover, the evening’s keynote speaker, a standing ovation.

The event, which was promoted but not sponsored by the city, was designed as a celebration of Evanston’s reparations initiative and the start of a continuing dialogue. The fund will be capped at $10 million and officials say it will be used to help the city’s black community with economic development, education and housing, among other issues. The fund will be paid for with a 3% sales tax on adult recreational marijuana, which becomes legal in Illinois Jan. 1.

But most who spoke Wednesday night said the issue was bigger than Evanston, which they said is one of the first towns in the nation to create a local fund. Many said they see Evanston’s actions as an example that leaders in other parts of the country and around the world could follow.

“You, the citizens of this extraordinary moment, who will go down in history," Glover began, while many audience members held up their phones to capture his words on video.

“This is the most intense conversation, I believe, right here. Reparations," Glover said. “Nurture our children and know they will take on the battle and they will continue the battle.”

Members of the National African American Reparations Commission also took the stage, answering questions and sharing their own perspective on reparations as they push the effort nationwide.

Baptiste introduced a resolution supporting reparations as an Evanston alderman in 2002, he said. Now, he is seeing that vision become a reality.

“We continue today in spite ... in spite of the wrongs that have been committed against us,” said Baptiste. “There is courage here in this city.”

While Illinois was not a slave-holding state, discrimination, redlining and Jim Crow laws all affected Evanston residents, multiple speakers said. 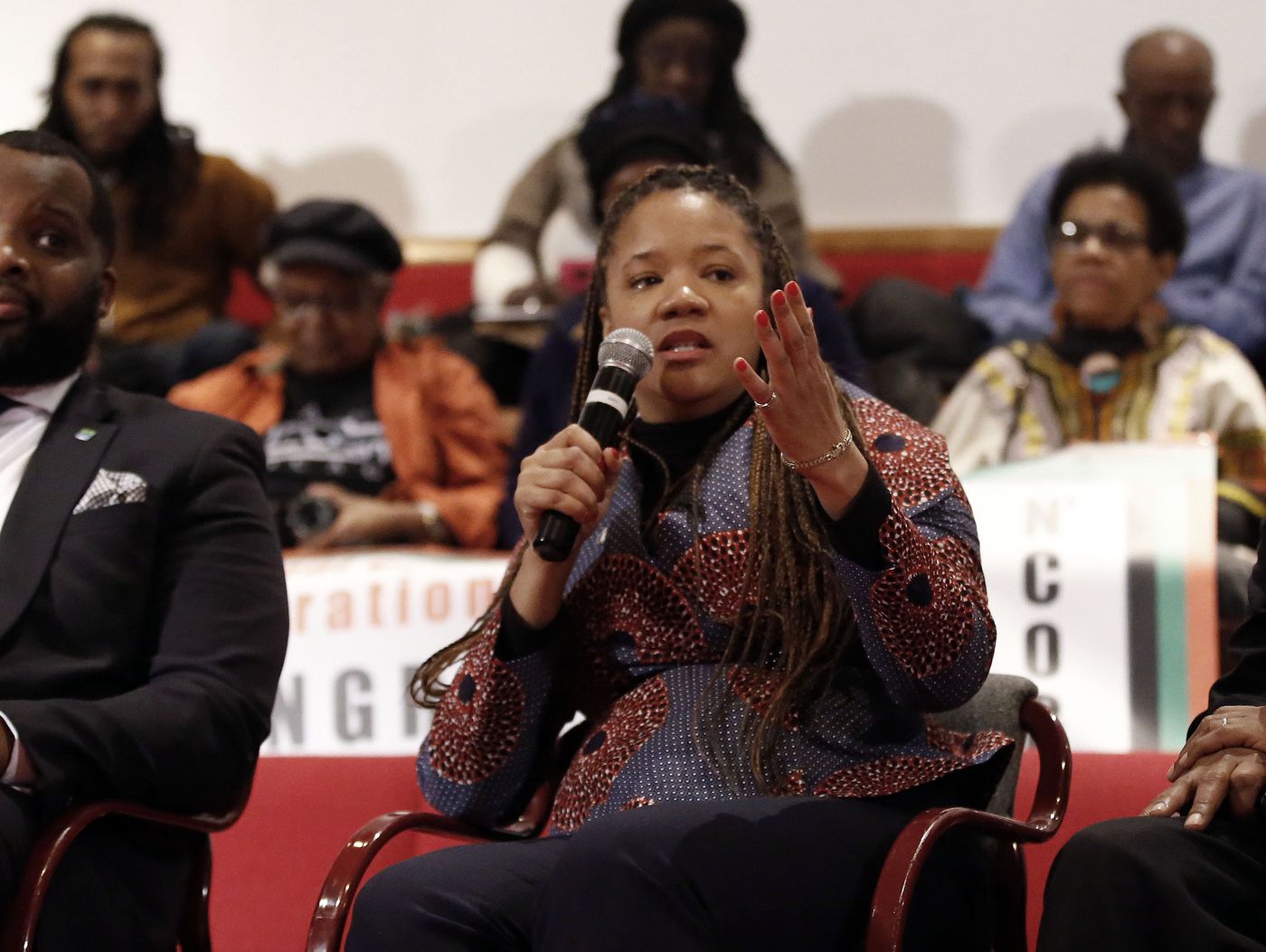 Evanston residents pride themselves on diversity, Simmons said, and “we needed to be true to that.”

Security was tight for the event, with streets closed in about a two-block radius from the church.

Snow plows, fire engines and other large apparatus were parked on either sides of the closed intersections, with Evanston police SUVs parked horizontally across them to block traffic. Evanston police officers were posted in all corners of the church sanctuary, entryway and on the streets outside, and Police Chief Demitrous Cook welcomed guests in the lobby.

Audience member and Evanston resident Laury Prince said she brought her daughter, a college student, because “we absolutely couldn’t miss this. It’s a first, it’s historical, we had to be here.”

Prince called the speakers dynamic and said she learned a lot by attending. Born in Belize, Prince said she could relate to Glover’s call to help those of African descent all over the world, not just in Evanston or the United States.

A volunteer chaplain in Cook County jails, Hemphill said the vast majority of the prison population he sees is black. Meanwhile most of the police, attorneys and judges are white. He hoped reparations could help close that gap.

Evanston’s reparations measure was passed in an 8-1 vote. No one spoke out against the effort at the meeting where it was passed. A Reperations Subcommittee has been formed to determine the exact ways in which the fund’s proceeds will be used and distributed.