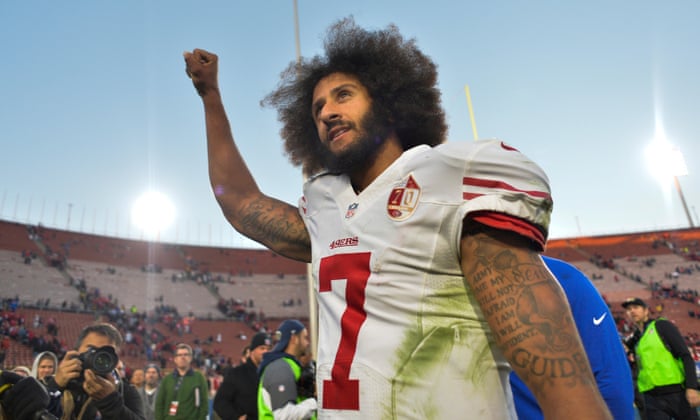 Colin Kaepernick’s lawyer says his client still wants to play in the NFL, and believes he would fit in well at the Super Bowl champion New England Patriots.

On Friday, Kaepernick and his former teammate Eric Reid settled a complaint of collusion against the NFL. Reid and Kaepernick claimed the league’s owners blackballed them because they had protested against social injustice by kneeling during the national anthem. The terms of the agreement are confidential.

Kaepernick has not played in the league since he left the San Francisco 49ers at the end of the 2016 season. In an interview with CNN on Saturday his lawyer, Mark Geragos, said the 31-year-old “absolutely wants to play” and said Kaepernick continues to stay in shape and is game fit.

Geragos said the Carolina Panthers would be a “natural place” for Kaepernick. They signed Reid last season, and their starting quarterback, Cam Newton, will have shoulder surgery this offseason. There was no significant backlash from Panthers fans when they signed Reid, who was a teammate of Kaepernick at the 49ers.

“I think you’re going to see ... within the next two weeks that somebody is going to step up and do the right thing, and you want me to predict who?” Geragos said. “Besides the Panthers, it would not surprise me if [Patriots owner] Bob Kraft makes a move.”

The Patriots may not seem a natural fit for Kaepernick. The team’s coach, Bill Belichick, and star quarterback, Tom Brady, both have ties with Donald Trump, who has consistently attacked NFL players’ anthem protests. Although Brady is now 41, he has said he wants to play until he is 45 and has a trusted back-up in Brian Hoyer, one of his closest friends. However, Kraft is known as a conciliatory voice within the NFL and has been an advocate of social justice, an interest that he shares with Kaepernick.

The Panthers and Patriots have not responded to Geragos’s comments.

Kaepernick will turn 32 in November but with quarterbacks such as Brady, Drew Brees and Philip Rivers playing into their late 30s and beyond he is still in his prime years. “This is not someone who is over the hill,” Geragos said of Kaepernick. “You get smarter at that position, and he is wise beyond his years.”

Geragos was asked whether Trump’s attacks had upset Kaepernick. “No, on the contrary,” he replied. “The president’s attack was the hijacking of what Colin was doing, it was a perversion, it was really kind of gross.