Toward the end of the first season of Stranger Things, Lucas sets off on his own to find Will in the Upside Down. Preparing for adventure, he stuffs his backpack with a flashlight, binoculars, and his trusty slingshot. He straps on his utility belt before adding the final touch: a camouflage bandana tied into a headband. Knot secured, his face transforms to show fierce determination, as if the cloth contains superpowers. And so the character’s signature look is born.

But don’t credit the wardrobe department — the idea came from the actor himself, Caleb McLaughlin.

The surprise hit of 2016, Stranger Things has since blown up even further, becoming one of the decade’s defining TV shows and turning its young, previously unknown cast into bona fide stars. McLaughlin followed up the show’s first season with a turn as the young Ricky Bell on BET’s The New Edition Story. His role was expanded in Stranger Things’ second season to include a love triangle involving newcomer Max (Sadie Sink) and Dustin (Gaten Matarazzo).

But most interesting to us is McLaughlin’s emergence as a budding style icon, bursting onto the scene at his first Emmys in 2017 in a purple silk tuxedo adorned in flowers, and following it up with ’fit after ’fit on red carpets and in front of his 5.8 million Instagram followers. At the 2018 Emmys, he stole the show again with an all-white Louis Vuitton monogram suit from Virgil Abloh’s first collection. 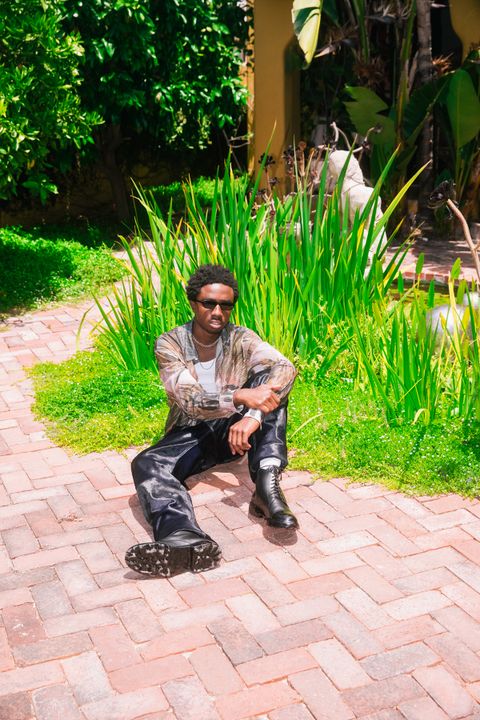 Abloh called his Paris Fashion Week show “COMING OF AGE,” saying the key to understanding it was to look through a child’s eyes, one whose “encounter with clothes and fashion is yet to be influenced by societal programming.” It’s easy to imagine McLaughlin as that child; we’ve seen his style blossom, incorporating some current trends but not becoming fully lost in them.

From a young age, McLaughlin says his parents encouraged him to dress himself. He was drawn to a range of colors. He’d rock loud shirts, short shorts, bow ties, suspenders, and bright red rain boots. Complete with ashy knees because he hadn’t started using lotion yet, his entire family said he looked like Mr. Brown from Tyler Perry’s Meet the Browns. While he no longer dresses like a middle-aged man, you can still see traces of those sensibilities in his daring red carpet looks.

“It just made me feel good,” McLaughlin says on the phone about his still-developing personal style. “When I put on an outfit that I really like, it just builds my self-confidence. I like good fabrics, colors that make me pop.” 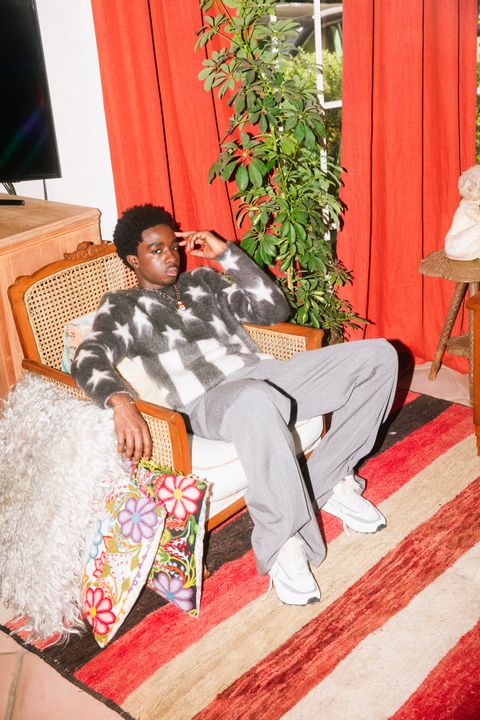 Sneakers were never a priority until he grew older and started being exposed to them online via social media. Now, the sneakers come first before he builds the rest of his outfit around them. While his rotation is strong, and Stranger Things co-star Noah Schnapp says he’s got the best sneaker game on set, McLaughlin is hesitant to call himself a true sneakerhead.

“I’ve been opened to a world that I never knew was there. I didn’t even know how many sneakers were out there, how many colorways there were,” he admits.

In his Greatest magazine cover story, McLaughlin admitted he doesn’t have a historical knowledge of different silhouettes and deferred to the experts. He simply knows what he likes and has had the opportunity to start building a collection. Gatekeepers are quick to call out newcomers to this fickle world of ours, but you’ve got to respect a kid who’s leaping in enthusiastically and acknowledging there’s still more to learn.

Also admirable is the range of his rotation, which includes limited edition releases such as the “Clay” YEEZY Boost 350 and “Gatorade” Air Jordan 1 and general releases including the Air Max 720. Given his platform and those Netflix checks, he could easily rock nothing but the most-hyped kicks. Instead, he puts the “personal” in “personal style” by ignoring the noise and choosing what he truly loves. 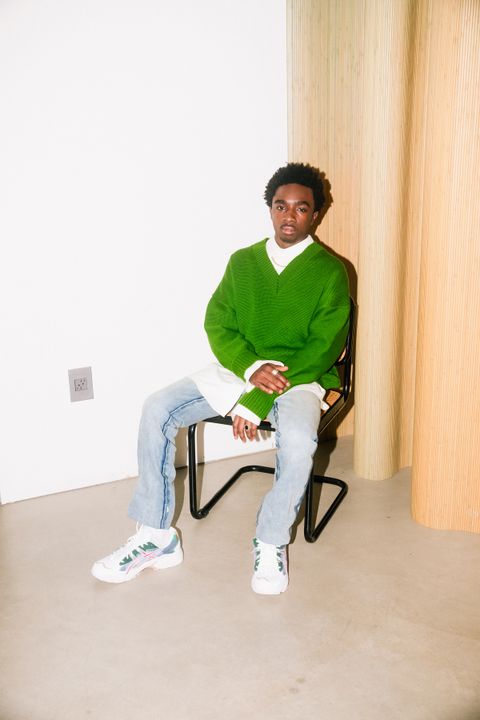 During his Sneaker Shopping appearance last September, he had a modest outing compared with other guests, picking up a pair of Justin Timberlake Air Jordan 3s, the Travis Scott Air Force 1s, three pairs of Pharrell x adidas Hu NMDs, and the Just Don Golden State Warriors shorts for a grand total of $1,782. Those sneakers have made frequent appearances on his Instagram to this day, a much-needed antidote to the rampant “cop, flex, and forget” cycle of consumption.

For the Stranger Things 3 premiere late in June, McLaughlin pulled up in a white tee, multicolored Pyer Moss denim jacket, green striped silk trousers by Kenneth Nicholson, and those Travis Scott Nikes. And like a musician changing wardrobe mid-concert, he then swapped his Air Force 1s for his trusty “Clay” YEEZYs and his jacket for his own matching pink Be Your Biggest Fan hoodie.

“I just did it in the car,” he says. “I had already envisioned it when I did it. At first, I had a lime green sweatshirt. Then I was like, ‘I don’t want to look too matchy-matchy, so let me just throw it off a bit.’”

His Be Your Biggest Fan merch began with a hashtag he started on Instagram to encourage his fans to build their confidence. That motto also pushes him forward when he feels insecure about his work or wants to try something that might be embarrassing.

“I’ve always been told to love myself, and now I have this platform to speak up about what I believe in,” he says. “I felt that it was necessary, and I just really care for the world. I was told one time at Comic-Con that I saved this girl’s life because she said she wanted to kill herself before #BeYourBiggestFan. Now that she has the hashtag and someone like me to encourage her to keep living and enjoy life, it just motivated me even more to keep going.” 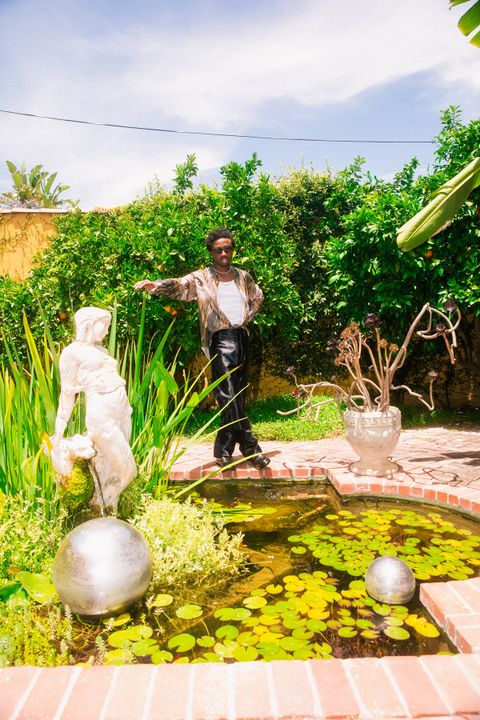 The Be Your Biggest Fan products feature a bee logo that McLaughlin designed with his parents. Continuing that theme, much of Be Your Biggest Fan’s catalog is black and yellow, currently offering hoodies, T-shirts, and socks, with plans to expand to shorts and sweatpants, and more colors in the future.

“Clothing is a part of me and helps me show who I am,” McLaughlin says. “I felt that was a way to show my love, and people can wear it to express themselves.”

With expressing himself through clothing so important, it’s no surprise McLaughlin had ideas for his character Lucas’ wardrobe. “I just felt that Lucas was really into combat and the military,” he says of Lucas’ signature look. “I was like, ‘You know what? Lucas needs a bandana because he has a great imagination. I bet he does this in his room all the time as he’s fighting monsters.’ So he couldn’t wait for this moment to put on his bandana and utility belt and get ready for battle.”

With season three of Stranger Things out today, Lucas is set to put on that headband one more time. But we’ll be watching what Caleb’s wearing for many more years to come.